By Vera van de Nieuwenhof in Features on October 11, 2019

A couple of years ago we had the pleasure to talk to long-time Kunming resident and scholar, professor John Israel. Since he was one of the first foreign residents of Kunming he had a lot of interesting stories to tell, about the Kunming of days gone by. He has furthermore published a book about Lianda, the exiled Beijing universities that were relocated to Kunming during the Japanese occupation. He now lives between Kunming and the United States, and we interviewed him via email. 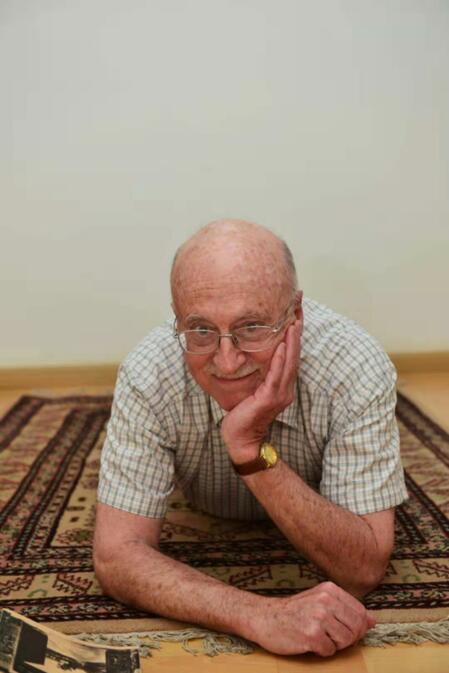 John Israel was born in New York City on June 16, 1935, to a small businessman who dropped out of school after eighth grade — a self-educated Renaissance Man — and a college-educated sister of the composer William Schuman, in a family descended from mid-19th-century German-Jewish immigrants. He studied Modern Chinese History at Harvard University.

Taiwan and the first forays into Mainland China

He visited Taiwan for the first time in 1959 — making the passage with a China Merchant Steam Navigation Company freighter to Jilong — and lived in Taipei until 1962, doing PhD research, studying spoken Chinese, and exploring this beautiful island. It was here that he became accustomed to speaking the language, to living in a Chinese social environment, and enjoying spicy hot Sichuan food.

In 1978 he visited the mainland of the People's Republic of China for the first time, as scholar-escort for an educators' delegation sponsored by the National Committee on US-China Relations. Over the next few years, he returned several times as an escort for various groups. One of these groups was the board of the National Geographic Society, including Ladybird Johnson.

Kunming - the start of the Lianda research project

From April to July 1980 he lived in Kunming, the first American exchange professor since 1949 to visit the province of Yunnan and only the fifth Westerner to establish residence in Kunming following the normalization of US-China relations in January 1979. This was the beginning of four decades of ever-deepening attachments to Yunnan in general and Kunming in particular.

This first stay was sponsored by the Committee on Scholarly Communication with the People's Republic of China under the National Academy of Sciences. He was one of the initial cohort of US scholars under the academic exchange that was part of the Carter-Deng Xiao Ping normalization agreement. It was during this time — conducting research and interviews in Beijing — that he started his work on his research project: The Southwest Associated University (Xinan Lianda, 西南聯大), 1938-1946.

Glory days: the Kunming of yore

In 1980, Kunming was a charming old city of low-lying wooden and stucco buildings with balconied geraniums and moss-covered tiled roofs. Much more like the Kunming of a quarter-century earlier than the city a quarter of a century later. Unfortunately, authorities made the same kind of decision regarding Kunming that Zhou Enlai had made about Beijing after Liberation. Rather than preserve the historic core and build a modern city around it, they chose a tabula rasa approach. Had they sought a less drastic way of modernizing Yunnan's capital, Kunming's architectural splendor today might rival Lijiang's. 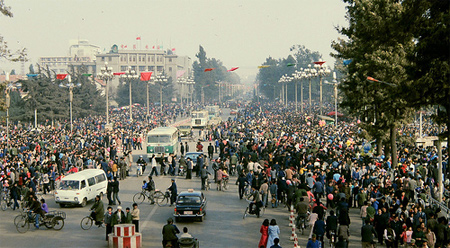 Along with the construction of an aesthetically sterile "modern" city, authorities made another dubious decision — to give priority to automobiles. Charming and peaceful alleyways such as Wenhua Xian — never appropriate for automotive traffic — now became motorways. Limited parking spaces were filled with cars that were virtually useless for city transportation as they were mainly employed for occasional holiday excursions and to show off wealth. Urban congestion, along with atmospheric and noise pollution, followed. In this respect, a once unique Kunming became a microcosm of China's new urban landscape.

Apart from the changes in the urban landscape, John further notes:

Changes in Kunming during the past four decades are too numerous to mention, but I find the psychological transformation even more striking than the material. In 1980, "Reform and Opening Up" was just a slogan. Few people I met really believed in it. 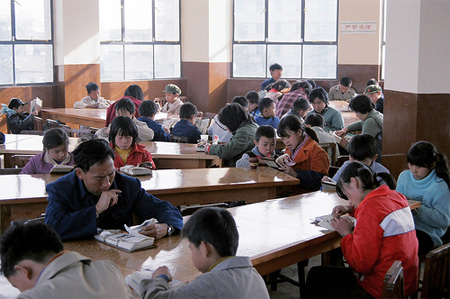 Graduating college students felt that their only real hope was to go abroad and never return. In fact, studying in the United States was all but impossible. The first success story I know of involves a young English language instructor from Kunming Normal College (Now Yunnan Normal University) who was spotted by a resident of Valdosta, Georgia, while interpreting for a visiting delegation of Ford Motor Company salesmen. Over the course of the next four decades, urban Chinese became optimistic, self-confident producers and consumers — the way Americans used to be.

I can't recall many "ha-ha" funny things from 40 years ago, but I do recall being introduced to a Yunda student while walking along dusty eucalyptus-lined Huancheng Beilu (now Yieryi Dajie). "Oh, you are Professor Israel," he said. "Everyone says that your teacher, John King Fairbank, was an American spy in China during the Anti-Japanese War. So you must be one too." I was not amused.

This anecdote does tell you something about how unprecedented it was to be one of the only five big-nosed foreigners living in Kunming back then. Fortunately, the reception they received was generally friendly, and the people at Kunming Normal College were enormously helpful to him, both in his work and in his daily life.

John lived in a building — still standing and visible from the pedestrian overpass — on the corner of Tianjundian Xiang. John shared the only sit-down toilets at the college with Steve and Panny Thorpe — young Texan English teachers who were living across the hall. They were well fed thanks to a cook and refrigerator. When the fridge broke down, there was nobody in the entire city who could repair it, so it was hauled away and replaced with another one that had "Department of Physics" crayoned on its front. The college president had no fridge. 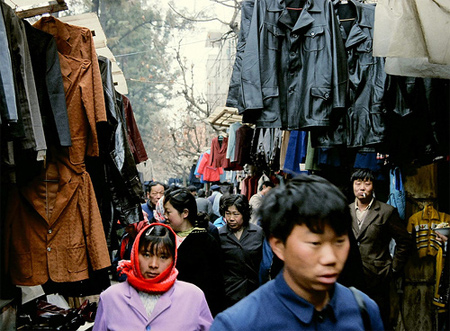 Lianda: A Chinese University in War and Revolution

Without the experience of living in Kunming, it would have been difficult to write "Lianda: A Chinese University in War and Revolution" published by Stanford University Press in 1998. 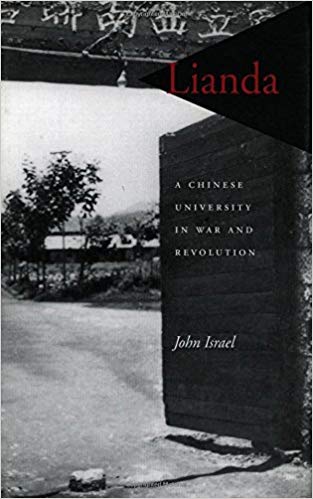 However, the book was far from a best-seller, having sold fewer than 500 copies by 2012, when the Beijing translation appeared — two years after the Taipei translation. Within six months, the translation had sold some 20,000 copies. Its author, an obscure academic in his native land, had now become a minor celebrity and was invited to speak at universities and book stores in Beijing, Shanghai, Nanjing, and Xiamen. His photo was splashed across the front of a Kunming weekly supplement.

By this time, John and his wife — whom he had met in Kunming in 1980 — had bought an apartment overlooking Green Lake Park and were spending several months a year in their favorite Chinese city. Though their building was torn down in 2017, they continue to live part of each year in the Spring City. In 1980 John celebrated his 45th birthday in Kunming — In 2015 he celebrated his 80th in the same city.

It would be difficult to name my favorite place in Yunnan because I have visited so many beautiful areas. However, I have particularly warm feelings about Xizhou, a small town north of Old Dali situated in the middle of lush rice fields near Erhai. There I enjoy visiting with Brian and Jeanee, whose Linden Centre, located in a lovingly restored old Bai mansion, has become an internationally famous boutique hotel and conference centre.

Aside from the food, climate, and people, there is little about modern Kunming that excites him, but the area around Green Lake Park still reminds him, just a little bit, of the city with which he fell in love in 1980.

In no place in the world do I feel more at home. 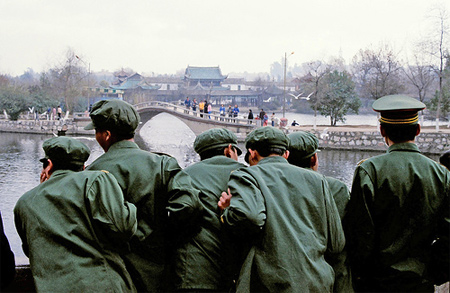 After 40 years of teaching modern Chinese history — thirty-five of them at the University of Virginia — John retired in 2003. When he and his wife are not in Kunming, they live in Decatur, near the Georgia Institute of Technology. This is where John's wife taught Chinese language and culture for 24 years before her own retirement.

John is currently working on a book about the "55 Educated Youth" (五十五知青), the pioneers among the "sent-down youth" in Yunnan during the Cultural Revolution. There were an estimated 17 million sent-down youth nationwide. As with his Lianda study, in this topic history is also most accessible in the microcosm.

As a scholar, he is inspired by men and women who understand that the art of writing history is rooted in the ability to tell a story that conveys a sense of the past to readers in the present. This is exemplified by his teacher and mentor, John King Fairbank. Another source of unending inspiration are the teachers, students, and alumni of Xinan Lianda.

Among western longterm sometime-residents John goes back further than any of us and is full of interesting stories, as well as solid knowledge and understanding that many of us chase. He is also an enthusiastic singer of broadway show tunes.
I found his book LIANDA:... really exciting - I don't think I've ever read another book on the history of a university, it's simply not generally a subject that interests me - but John's book was really exciting and informative concerning the period 1937-46, and perhaps impressed on me, more than anything else I've read or seen, just how important education has always been in Chinese culture - neither students nor instructors during the period were eating too well and often had to run & hide in fields when the Japanese planes bombed the city (before being eliminated by the Flying Tigers in December 1941) - after which they'd come back to class. And yet, even under such extreme conditions of exile to this city far away from China's more developed areas useful and original research was carried out with the resources available. The book is an inspiration for anyone who believes in education and its capacity to enlighten minds and promote independent thought, and it's good that it has attracted many Chinese readers. It should attract more foreign ones.

John's a great man. Not only did he write that fantastic book on the epic journey of northern universities to Kunming but he can also sing the complete works of Rodgers and Hammerstein.

I briefly met John about 10 years ago, the story of Lianda College was an important event in during the war against Japan.

Did John finally reach a fair settlement regarding his levelled house or is dispute still ongoing?

He sorted it out as far as I know

Nice interview Vera. It is so good to have a summary of the anecdotes Israel told along the years.