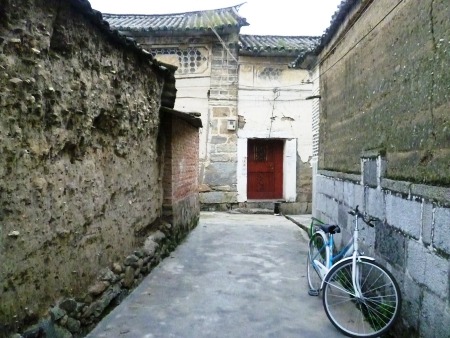 The small town of Xizhou (喜州) is a rarity in Yunnan. It's easily accessible, but not overrun by tourists. It feels isolated, but outsiders are not considered strange. The local government has implemented policies to maintain Xizhou's traditional appearance, but not in a way that seems forced.

Literally meaning 'happy prefecture', Xizhou is located a little more than 20 kilometers north of Dali Old Town, just off the western shore of Erhai Lake. The main town of Xizhou and its surrounding villages are home to a total of 2,500 residents who live a laid-back agrarian existence that does generally seem happy. 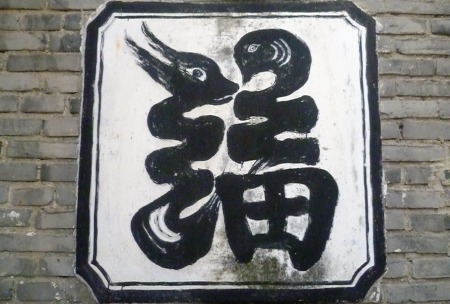 Both Xizhou and Dali are primarily populated by the Bai people but their fates have been quite different. Whereas Dali is more or less fully plugged into China's tourism infrastructure, smaller Xizhou has only recently begun to be noticed, with mass tourism not having made major inroads – not yet, at least.

Despite having much less interaction with tourists than their neighbors down the road in Dali, Xizhou locals have undoubtedly taken note of the steadily increasing trickle of curious domestic and international visitors stopping by to take in Xizhou's cultural heritage, which primarily consists of local homes. 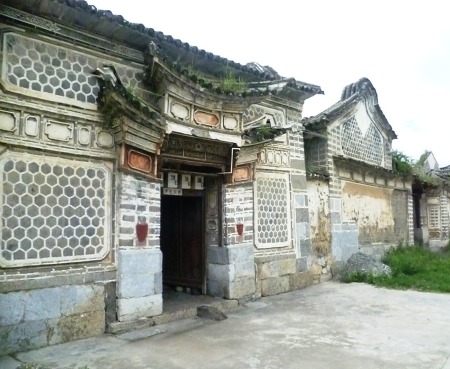 Xizhou is renowned for its traditional Bai architecture, characterized by ornate gateways, hexagonal honeycomb patterns, spacious courtyards and a carefully maintained balance between structural simplicity and elegant detail. More than 100 homes in this area are registered cultural relics, the largest examples belonging to its once-dominant clans: the Yins, the Dongs, the Yans and the Yangs.

The construction of large courtyard homes in and around Xizhou was driven by the emergence of a prosperous merchant class in the late 1800s who dealt in tin, silk, musk and other goods. Before the turn of the century, Xizhou merchants were regularly leading mule caravans into the Tibetan regions of northwest Yunnan. Shortly afterward, caravans originating in Xizhou were traveling as far as western Sichuan's Kham region, bringing wealth and goods from afar back to its residents and their opulent homes.

On a recent visit to Xizhou, we stayed at the old Yang family compound – originally owned by Yang Pinxiang (杨品相) – which today is known as the Linden Centre. This boutique hotel and cultural retreat is named after Brian and Jeanee Linden, an American couple that has been coming to China for decades. 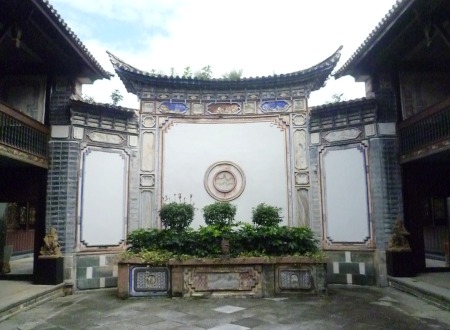 A courtyard inside the Linden Centre

In addition to the years of careful restoration overseen by the Lindens, the old Yang compound's intricate carvings and unique artifacts had previously been protected by another unlikely tenant: the People's Liberation Army. During the Cultural Revolution of the 1960s and 1970s, the army commandeered the traditional home, rendering it off limits to zealous Red Guard units seeking to destroy anything old.

Today the Linden Centre is not only a top-ranked hotel, it is also a venue for cultural exchange and an ideal jumpoff point for exploration of Xizhou and destinations further afield around Dali prefecture. 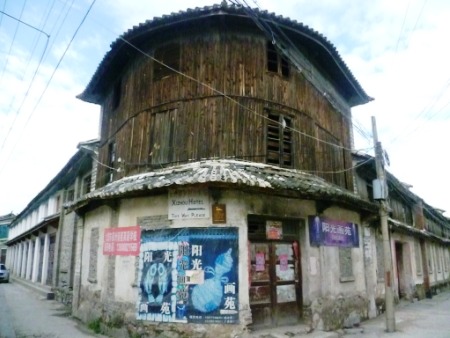 One of the simple pleasures of a visit to Xizhou is simply strolling or cycling through the alleys that wind through this lakeside smattering of tiny villages. The Linden Centre has produced a handy bilingual map that can be picked up for free at the bar, enabling visitors to pack in as many of the town's sights as possible. 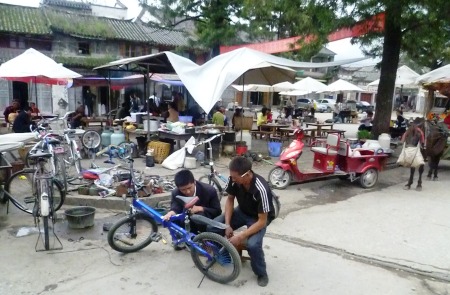 Xizhou centers around Sifang Jie, the old town square, which is still the main hub of activity during the day. Walking through the square we saw a large variety of local mushrooms on offer as well as Yunnan-style barbecue and Xizhou's most famous snack: Xizhou baba (喜州粑粑), a lardy flatbread that tourist-savvy vendors misleadingly call "pizza". Xizhou baba comes in two main varieties, a savory version with minced pork and spring onion on top and a sweet baba filled with dousha, a sweet and filling red bean paste. Sifang Jie also has two of Xizhou's most popular – and only – restaurants: Sifang Jie Shidian (四方街食店) and Jinhua Fandian (金花饭店). Both restaurants are open well into the evening and have limited English-language menus.

We ate at both establishments, preferring the food and the atmosphere at Sifang Jie Shidian, where we entered the kitchen to see what looked freshest and ended up with a very satisfying meal of fried sliced pork with spicy dipping sauce, stir-fried snow peas and lotus root with spicy pickled vegetables. In between bites we fended off an old Bai woman selling souvenirs whose friendly but persistent sales approach did not persuade us to purchase any of her wares, which included a Romanian-language edition of Quotations of Chairman Mao, an old pipe and a ridiculously long folding painting. If you are thinking of picking up a gift or memento, there are a few stalls selling local batik and other souvenirs near Sifang Jie. Slightly further from the town center, Mr Li at Shicheng Antiques offers a small but interesting selection of items from Xizhou's salad days, as well as the prerequisite communist paraphernalia. If handicrafts are more your thing, you may want to stop by Happy Embroidery Workshop, where local embroiderers turn out an impressive selection of work. 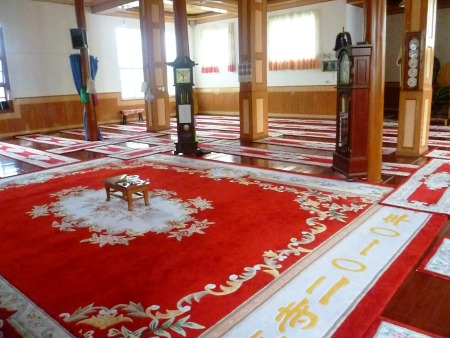 Regardless of which of the alleys in Xizhou you choose to cruise, you will likely find evidence of Xizhou's remarkable religious diversity. The town is home to followers of Buddhism, Taoism, Confucianism, Islam and the local Benzhu (本主) religion, which involves the deification of local heroes. There is one mosque and a handful of shrines and temples scattered around the area, all of which still play important roles in the local community today. Aside from the local architecture, the vast fields surrounding Xizhou also offer pleasant opportunities for exploration. From May through October, rice, corn and melons are the primary crops grown in the area. The cooler remainder of the year is dominated by wheat, broad beans, rapeseed and garlic. With the towering Cangshan Mountains looking on from above, the agricultural patchwork that surrounds Xizhou contributes as much to the area's idyllic vibe as the villages themselves. A raft on Erhai Lake

No trip to Xizhou is complete without a stroll down to the shores of Erhai Lake. Walking along the duckweed-filled coastline, it's impossible not to meet local children or elderly residents. Along a new lakeside path directly east of Xizhou, we got a quick lesson in the Bai language from a group of young boys who asked if we wanted to swim, or yashima, quite different from the word youyong in Mandarin. We declined the invitation, and couldn't help but feel that this generation of local youth living by one of the only lakes in Yunnan whose water quality has actually improved in recent years was rather lucky. At the end of the day, still tired from having cycled from Kunming, we sat on the Linden Centre's sun deck as night fell, listening to the deep drone of bullfrogs, the chirping of crickets and the rustling of rice stalks below. More and more stars became visible as the sky cleared. Conversation ceased as we watched a near-full moon rise above the mountains across the lake. Getting There
Xizhou is just over 20 kilometers north of Dali Old Town, from where it can be reached easily by car, bus or bicycle.

Car
Hiring a minivan or taxi in Dali will likely cost around 40 yuan one way. If you're planning on only stopping by for a day, there are plenty of bus, car and motortrike options in Xizhou that can get you back to Dali, so hiring a car for the day isn't necessary if you don't mind a little haggling.

Bus
Every day there are dozens of buses heading from Dali's west gate to Xizhou – these 19-seat buses should have signs for either Eryuan (洱源) or Hudiequan (蝴蝶泉) in their window and will likely charge seven yuan to take you to Xizhou.

Currently some buses will stay on the Yunnan-Tibet highway (滇藏路) running by the west gate for the entire length of the journey, dropping passengers for Xizhou off uphill from the town of Xizhou next to a small stream. From here, simply walk downhill for 10 minutes or pay a motortrike driver to take you the rest of the way for five yuan.

Other buses will head downhill to the Dali-Lijiang highway (大丽路), following it until reaching the western edge of Xizhou.

Bicycle
In addition to the two highways mentioned above, there is also a scenic unsurfaced lakeside path from Caicun Pier downhill from Dali along Erhai Lake's west coast up to Xizhou. The rough surface makes it the slowest road to Xizhou but if you're willing to sacrifice speed, you can enjoy some nice lakeside scenery.

If you'd rather not take the scenic route, the Yunnan-Tibet highway is the fastest and least-trafficked way to get to Xizhou, although currently this requires a short detour through the parking lot of the Three Pagodas due to construction work. Once near Xizhou, make sure to descend eastward toward the town on one of the dirt paths near a large white villa development, which can be confirmed by consulting a map or asking locals.

Great article! I've been to Xizhou several times this year and it's definitely a special, beautiful place. I've been all over China and this is one of the few places that feels untouched by commercialization, yet is still open to and friendly towards tourists without being pushy. A visit to the Linden Centre is a must if you're there; their staff is amazing and well-connected. I just hope Xizhou doesn't become overrun with tourists and become another Dali, Lijiang, or Heshun in the next few years!

I love these articles, always well written and insightful whilst providing us with invaluable advice on the 'how's' and 'where's' etc. The pictures are cool too.

What a bummer, I rode right through Xizhou on my bike ride from Dali to Shaxi a couple months ago, and I never even realized there was something worth stopping for!

I've been there several years before, very few people going there that time. it seems change a little now, but not too much. there was so few worth to see in this town.

I've been Xizhou last year in a rainning day,nice place.

It sounds amazing. I would love to stay at the Linden Centre but looking on their website it seems that you have to participate in their tour programmes if you want to stay there. Has anyone stayed there without getting involved in their activities? I'm sure they're great for first time visitors to China but I just want a hotel so I can explore by myself. Thanks!

I'm going to Dali for Qing Ming Jie, and wanted to stay at the Linden Center but it's fully booked. Any other recommendations of places to stay for a night or two in Xizhou?