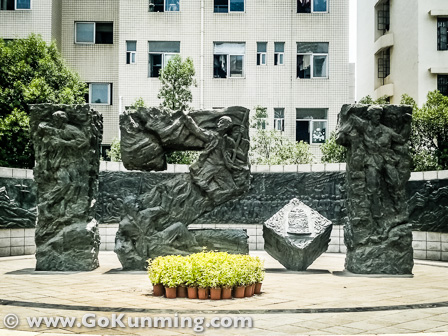 Tucked away in the northeast corner of Yunnan Normal University sits a lonely memorial garden. Aside from the occasional pupil diligently studying under shady cypress trees, this section of the otherwise bustling campus is quiet and undisturbed. Which is perhaps how it should be.

The 12-1 Memorial commemorates the events of December 1, 1945, when three college students and one professor were killed in Kunming. To Spring City locals this is known as the Yieryi Shijian (一二一事件), or the 12-1 Incident.

The story of what lead to the murders of these four people has become short on details and heavy on anti-Guomindang propaganda. While accounts vary, they all agree the four victims of the 12-1 Incident were killed in clashes between Guomindang (KMT in Wade-Giles romanization) supporters and a group of students and professors protesting what they deemed to be an autocratic regime. 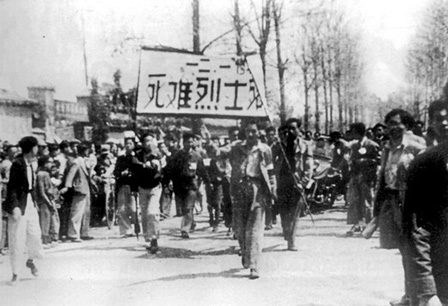 Protestors honoring the martyrs of December 1, 1945

Three months after Japan officially surrendered to close World War II, a ragged truce reigned in China between the Communists of Mao Zedong and the Nationalist forces of Chiang Kai-shek. Kunming had been bombed repeatedly during the war and had also acted as a staging ground for the Flying Tigers. When the war ended, the city was nominally controlled by the KMT.

By the close of 1945, Kunming had been repeatedly inundated with waves of university students fleeing China's eastern cities. Three of the country's largest centers for higher education, Peking University, Tsinghua University and Nankai University had all relocated to Kunming in 1938. In the Spring City they were combined into one entity called the National Southwest Associated University (NSAU).

Following the defeat of the Japanese, many college students in Kunming began to consider how China should be governed, and some of them started to organize. On November 5, 1945, some 6,000 undergraduates and faculty members called on all of Kunming's schools to join them in a general strike demanding a more democratic form of government. Over the next week, thousands flocked to the cause and marched through the streets of Kunming. The KMT response came on the morning of December 1. According to official accounts, armed Guomindang troops, backed by an unknown number of plainclothes provocateurs, entered NSAU and other campuses around the city, inciting riots.

Some accounts claim the KMT forces were armed with rifles and grenades, while others report general melees, with both sides using whatever weapons were at hand. Regardless, when the violence ended, four civilians lay dead. Three of them were students — Li Lulian (李鲁连), Pan Yan (潘琰) and Zhang Huachang (张华昌). The fourth victim was a teacher named Yu Zai (于再).

As word of the killings slowly spread through Kunming, people held memorials and marched in honorary funeral processions. According to 12-1 Museum displays, roughly half of Kunming's 300,000 people took to the streets to voice their dismay in the weeks following December 1, 1945. The 12-1 Memorial lies inside the campus of Yunnan Normal University, where Hongzhu Lu (红烛路) ends in front of several student dormitories. The entrance is marked by a giant bronze statue of the numerals 12-1 set upon a circular dais. The statue is backed by a curved frieze depicting scenes of the long civil war between Chinese communists and KMT forces.

Past the statue is a small courtyard with a dry pond containing several stone mosiacs. It was graduation day when we visited and small groups of students in purple gowns were running around, frantically taking pictures in front of the various memorials. We wondered if they felt any connection to students of 1945. 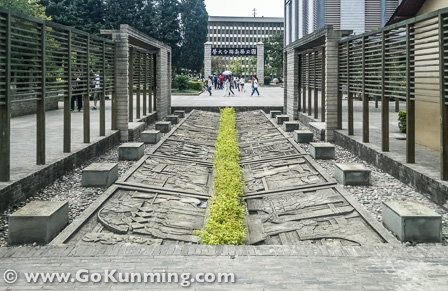 To the left of the pond is a squat building with a corrugated steel roof. It is purportedly one of the original classroom buildings from the old NSAU campus. Unfortunately, a camera crew was busily filming a movie inside and the structure was off limits to us.

Facing the old building is the entrance to the 12-1 Memorial Museum. The exhibits inside are not large but do contain a wealth of historical information including biographies of the four slain individuals as well as dozens of newspaper clippings and black and white photos taken in the days leading up to and following the 12-1 Incident.

Back outside is the memorial itself, called the Tomb of the Four Martyrs (四烈士墓位). It is a sparse affair composed of elevated tombs with small, modest markers identifying whose remains are concealed beneath each slab of marble. Directly behind the tombs is another frieze depicting a group of smiling students standing, perhaps oddly, underneath the Statue of Liberty. The tombs are surrounded by a low fence draped in red strips of cloth. If you visit, take care, as the bows and ribbons conceal a chain of thick, wrought-iron spikes. A small shady park sits to the left of the tombs. Interspersed along its walkways are several different monuments donated by different student and civic groups in remembrance.

The memorial is by no means a gaudy place. Its overall simplicity and understated grounds provide a fitting venue in which to sit and contemplate the unique place Kunming inhabits in the history of modern China.

A bit more background information on the times and the 12-1 incident in a book by one of Kunming's longest western residents, John Israel: Lianda - A Chinese University in War and Revolution, for the 12-1 incident see particularly pp369.

While scholarly, John's book is very readable and gives a lot of insight into the times of the anti-Japanese war here in Kunming. It has recently been translated and published to great acclaim here in China.

Nice, had always wondered in the back of my mind about the origin of the name of Yieryi Dajie (or as one street sign notoriously puts it, "Yi Er Yi Massy Street")

all martyrs are real hero!!!

When I visited the reception gave me an informative booklet with lots of background information.

Erie similarity to the Ohio state riots/shootings in 1970.