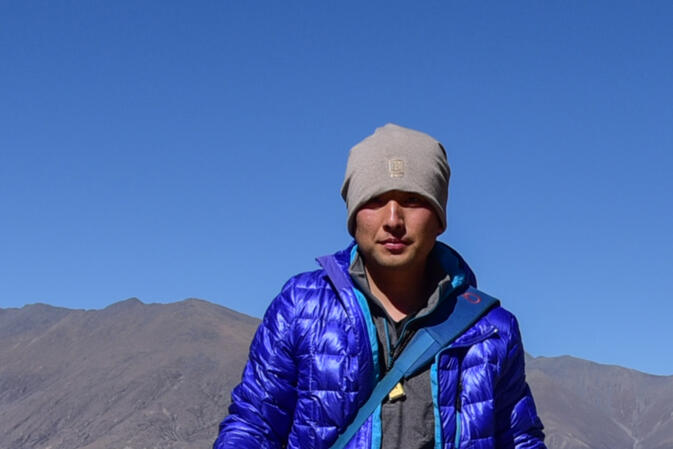 Photographer Xue Bin (薛斌) is a recent transplant to Yunnan. Born and raised in Hebei province's capital Shijiazhuang (石家庄), he has spent the past several years traveling and taking photos of the people and places in China's vast western regions. His award-winning work has been published extensively in magazines of all sorts, including Vision China and National Geographic.

Currently, Xue is working in collaboration with The Linden Centre and several sponsors to produce a film called Confluence (汇流) explaining why he feels the environmental preservation work going on with Erhai Lake (洱海) in Dali Prefecture is important. A short trailer can be viewed at the end of this article. We spoke with Xue about his photographic career so far, his work with charities and what drives him to keep taking photos. 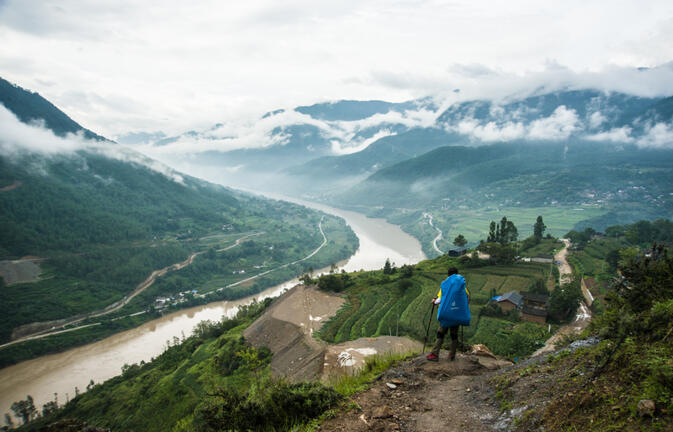 GoKunming: How did you get involved in photography?

Xue Bin: I didn't choose photography as a career on purpose, but it helped me in different parts of my life. I am an enormous fan of mountain climbing, and every time when I reached the top, I have the impulse to capture the beauty of the scene. So I bought some basic photography gadgets and started taking photos. Then I joined a few competitions and actually won some prizes. As I climb more and more mountains, I take more and more pictures. So in this way I gradually became a photographer. I'm not addicted to taking photos, but instead to going out into nature and finding peace there.

GK: So it wasn't necessarily a life-long goal to become a photographer?

Xue: Not really. I went to a technical college after high school and then started several companies after graduation, but they didn't work out. I was in management at other companies too, but I found myself pretty unhappy at jobs where I had to clock in and out every day. Also, I'm not good at maintaining the complex interpersonal relationships required for working at big companies in big cities. So I stopped doing those types of jobs and decided to keep climbing mountains and taking photos. My family didn't support me at first because they thought taking photos was just a hobby and not a career — that it would never pay the bills. I wasn't very confident then, but as magazines began to publish my work, I started to believe in myself. 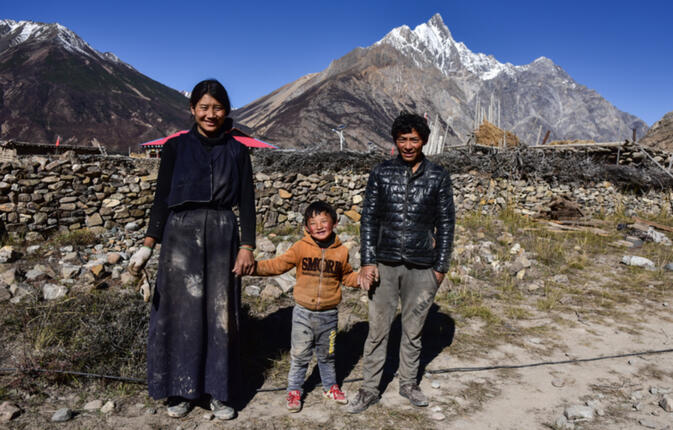 GK: And at that point you began to involve yourself in charitable causes while you traveled?

Xue: In 2009 I wanted a big change in my life, so I chose to start backpacking all over the place. I walked and took photos and then, yes, got involved in some charities. From 2015 on I started to take group photos of families in poor and remote mountainous areas. These are often the first and only family photos some people ever have, and I try to tell the stories behind them on social media too.

GK: Have you seen the results of your efforts first hand?

Xue: Sometimes! There was a family in Laigu Village [来古村] in Tibet I remember very well. After I photographed them I chatted with the father about their family's situation. He said his dream was to save enough money to give his eight year-old son, who had never attended school, an operation on his fingers.

His son Duoji was born with a hand deformity, which made him very shy and he was afraid to go to school. I posted their pictures on WeChat and explained the story. Almost immediately, a lady from Hong Kong transferred 70,000 yuan to my account to help the family, even though she barely knew who I was. With the help from this woman, a hospital in Shenzhen fixed the boy's hand and made the family's dream come true. 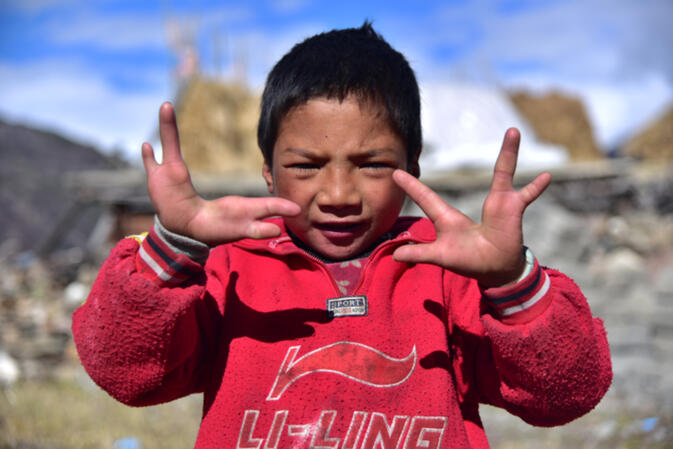 GK: Are you working with any other charitable causes or events currently?

Xue: Yes I am. When I went to Tibet, I was shocked by the amount of trash tourists left behind. To see exactly how much was at a certain place, I used ropes and rocks to measure the volume of the trash. I sorted and measured it all and then took photos. Now I am searching for cooperation with some tech companies which can deal with trash in a more eco-friendly way instead of just burying or burning it.

GK: What do you seek out most when shooting photos?

Xue: There is no specific category that I'm best at, I guess. I take photos of people, landscapes, nature, culture — everything really. Anything inspires me. But in the future I think I will probably focus more on taking photos of culture, charitable activities and Buddhism. 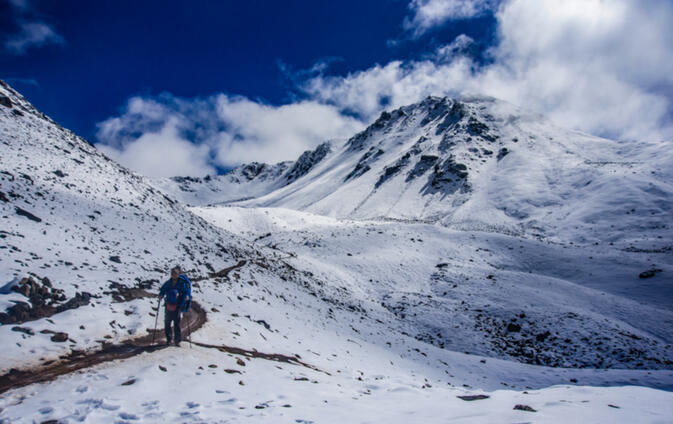 GK: So how do you choose where you go?

Xue: I never go to a place just for taking photos. I shoot them while walking and climbing. I guess I do go to temples to take photos on purpose, because I have been a Buddhist for 17 years. But for me, there is no bad place or good place. I go, meet local people and enjoy nature. Everything is good. Everything makes me happy. I like to go to small villages, places where no tourists want to go.

If I had to pick a place that I comparatively like more, it's Yunnan. That's why I moved to Dali. It's an incredibly comfortable place — that and its close to other places that are beautiful like Guizhou, Sichuan and Tibet. I used to backpack from Kunming to Wenshan a lot. I met many warm-hearted people on the road and they gave me free rides, free accommodations. I don't like to take others' favors for granted, so I helped them take photos and worked in their hostels. 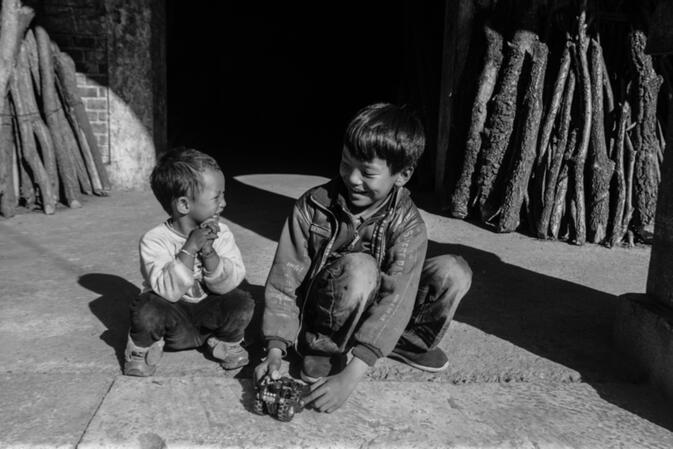 GK: In your travels, especially in poor rural areas, have you ever taken photos that ended up being controversial?

Xue: I don't think I've take many sensitive or controversial photos. Or maybe I took some and the magazines I sent them to didn't publish them and never told me why. A long time ago I found a very poor school in the mountains of Yunnan with the help of a local newspaper editor. I wanted to bring the kids some clothes and books, but the local authorities were afraid if I took photos of the terribly polluted land they would lose their jobs. I guess that's as close as I've come. In the end, I told them I wouldn't take any photos and instead just visited with the kids.

GK: What's next for you?

Xue: I just recently moved here, so currently I haven't started much work yet. I am looking for a courtyard house in Dali and later I would like to spend most of my time helping charities. I have a plan, but it's still a baby business and I don't want to talk about it to much. Basically, my dream is to do charity and promote traditional Chinese culture for the rest of my life.

Great interview, thank you! Love the diversity of Yunnan.