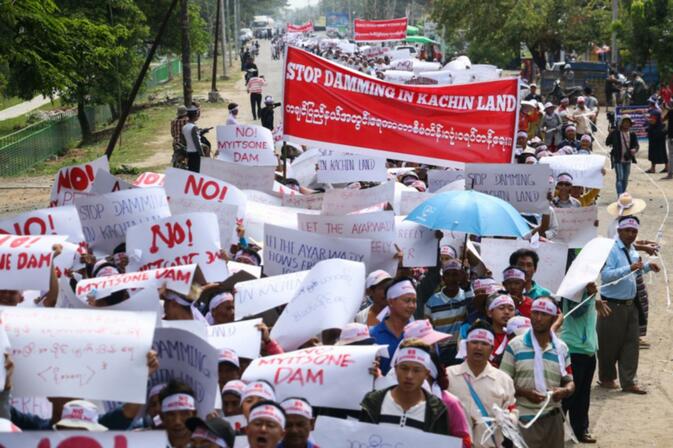 Protests held this week in northern Myanmar represent the latest obstacle to China's long-time plan to dam its western neighbor's largest and most important river. The demonstrations also appear politically timed, as they were held with Aung San Suu Kyi — Myanmar's de facto leader — set to attend an international trade forum in Beijing.

Estimates of crowd size — both by Burmese and Western media outlets — put the number of anti-dam protestors "in the thousands". The largest group marched through the streets of Waimaw, a town just south of the Burmese city of Myitkyina, capital of Kachin State. The gathered protesters held signs reading "No Myitsone Dam" and "Stop Damming in Kachin Land".

The Myitsone Dam project is a US$3.6 billion endeavor begun in 2009, only a few dozen kilometers from where protesters gathered this week. The project as currently envisioned is funded and planned primarily by China's State Power Investment Corporation. If ever completed, the 6,000 megawatt hydropower station would span the Irrawaddy River, create a lake the size of Singapore and displace thousands of rural residents.

Opponents of the scheme harbor a litany of concerns. On top of forced moves, protestors fear the dam would drastically alter the surrounding ecosystem and change forever the face of the Irrawaddy. The waterway flows for 2,170 kilometers — from the Himalayas to the Indian Ocean — and is traditionally considered the economic and food-providing soul of the country.

While often billed as an economic boon for Myanmar, according to previous dam agreements, huge amounts of the electricity produced at Myistsone would be sent to neighboring Yunnan province in China. Perhaps due in part to terms such as these, one-time Burmese president, Thein Sein, suspended the project two years after work started, saying its construction went against the will of the people.

Now both countries have different leaders and the Myitsone project has been rolled into China's Belt and Road Initiative. Suu Kyi once opposed the dam, but said as recently as last month that the entire issue needed to be examined "from a wider perspective", according to an Agence France-Presse report.

What exactly Myanmar's state counsellor thinks about the Myitsone Dam may be put to the test as early as this weekend. Suu Kyi will join diplomats and politicians from 37 countries at the third annual Belt and Road Forum, held April 25-27 in Beijing.

Nice signs - so obviously sponsored and incited by cursed foreign NGOs with no responsibilities to the actual people of Myanmar. Hydropower provides a source of sustainable renewable energy. Energy is one of the core pillars of all sustainable economies.

Not obviously sponsored by foreign NGOs. Nobody is opposed to the idea of energy, but there are both upsides and downsides to hydropower, and the Kachin, who have never accepted inclusion into Burma, have a point of view. It is rather condescending to take them only as sheep-like followers of some foreign NGOs. .

Didnt the foreign ngo's leave myanmar by now, since suu kyi was a 'fascist' to the loonies. The same person who they were drooling after for years, then started to protect her countrys souvereignity. What a mistake.

The idiot west can only blame themselves for loosing ground in myanmar, They are probably doing right thing choosing china instead, since west went wacko,

But Kahchins are a tough nut. They will accept no overlords, And they got guns that will not be confiscated.

@michael2015
Hydro is no silver bullet. There are a lot of downsides to these dams, ecological, social, and economic.

There is a recent historical record with plenty of evidence which we can consult, where the Chinese have built dams like this one in other neighboring countries, like Laos. In most cases, the social (AND economic) impacts on the communities who inhabited the valleys that flooded by these megaprojects have been devastating.

@Peter99 The drooling was before she condoned genocide.

Most Burmese would have a different view on genocide. And what all happened, and how the situation was manipulated only to make one side look bad, Maybe ask them too, and not only read the Western mainstream media. Which, btw, has become total trash.

Heard even the exiled tibetan "wolf in monks robes" became a target of our western freaks. As he said Europe should remain as Europe.

Who do you guys have left to hype about?

Let me guess the answer to that question. The national peoples congress,

Like Ive said, u guys have found ur suitable global corner.

Make a search for ecuador's dam..

If you have feasible economic energy solutions competitive in price, energy output, resource consumption (land, rivers, etc) feel free to enlighten me. Hydro comes with a cost - that is well established - the issue is does anyone have viable alternatives?

The BRI is genius. Projects are brought about by China conceiving a project, engineering it, gaining local political support, financing it, building it with Chinese labor and when the debt can't be serviced takes the natural resources used to collateralize the debt. In the case of dam in close proximity, China gets the energy as well. In response to criticism of China, Xi is now saying China will curtail what many countries say is predatory tactics.

More than a half century ago the US and Russia used this approach to extend their hegemony. One of the greatest dam projects, the Aswan Dam built by Russia, turned into gigantic problems.

I don't think 'gigantic problems' is a fair summary of the Aswan dam.

BBC attacking Myanmar/Burma again today. Its a conservative country - even in global measure - and the loony regressive left in West thought they could make it an anchor and Asian theater for their freakshow. Nope. Youre doing great, Burma. Let them abandon you, you are much better without them.

Ah yes Peter. The BBC flagrantly reported that soldiers convicted of massacring ten Muslim men were released from jail early. This was the massacre uncovered by two Burmese journalists from the loony left Reuters news agency who for some reason decided to report the healthy conservative goings-on and were quite rightly jailed.

@Peter: Who are the loony regressive left in the West? Which people in Burma are doing great? Are the Kachin doing well? Does their protest have any validity or not? Do you approve of the Tatmadaw?

No, I meant another article. On freedom of speech.

Im getting this whole thing, although it took a while to 'see' it. Burma remained conservative - even though the freaks thought Suu Kyi would roll a red carpet for the loony left in West - so it had to be punished.

Love you Burma. Right decision, you let these freaks in and your beautiful country is over.

Yea, we know u havent grown up Ishmael. Its great to be a kid whole life. You are probably just pretending dumber than u are, so other people have to be responsible and u can take a free ticket through life. Part of the China hike I guess, an existential free ride. Like a 'lord of the losers' character.

Peter, try to tell us what was so good about the way Burma was governed from 1962 until more recently - and it's not over, the Tatmadaw are still the main element, and Aung San Su Chi is obviously not some kind of final correction to the lousiness of the Tatmadaw, and the Tatmadaw were not created by loony westerners..
Now why is it you're blaming Kachin dissatisfaction with a dam on loony westerners?

Peter maybe you are lord of the loonies.

I will start to charge u Ishamel, as your dumb questions are meant to ensure u other ppl are responsible and u can sit down and take an existential freeride through life. You made it to seventy - no surprise here - but from now on every question you ask is 20 usd. Let see how bitter ur questions will taste in your mouth now, when they are not meant as ensuring idleness anymore.

Noodles at dawn. Let's see who's first with the la jiao.

its all a conspiracy.

Dazzer & Co., trolling in China, concerned about a human right issue in Bengal.

Do I need to point out what a parody you guys look like..