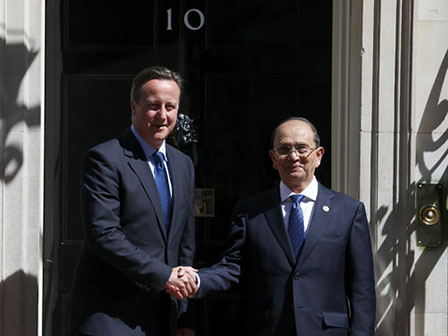 The leader of Yunnan's neighbor to the west is making international headlines while on a diplomatic trip to Europe. Myanmar's president Thein Sein delivered a series of provocative comments in England, signallling what could be enormous changes for the one-time pariah state.

Speaking at Chatham House in London as well as to the British Broadcasting Corporation, Thein Sein said his government would release all political prisoners by year's end. He also alluded to a possible pending ceasefire with breakaway states and discussed recent ethnic violence in Myanmar's western Rakhine State.

Of the country's political prisoners, Thein Sein said: "I guarantee to you that by the end of this year there will be no prisoners of conscience in Myanmar." He also announced that his government had already freed "thousands" of political prisoners and was listening to recommendations made by a civilian oversight council regarding the release of others.

I believe we will turn a corner soon. Very possibly, over the coming weeks, we will have a nationwide cease-fire and the guns will go silent everywhere in Myanmar for the very first time in over 60 years.

Thein Sien was pressed by British Prime Minister David Cameron on the issue of 2012 clashes between Muslims and Buddhists in Myanmar's Rakhine State. More than 200 people were killed and an estimated 140,000 displaced during the sectarian upheaval. In response to Cameron's comments, the Burmese leader stated his country would adopt a "zero tolerance policy" with respect to anyone inciting ethnic or religious violence in the future.

Momentous changes in Myanmar are important to Yunnan not simply because of proximity. Chinese oil giant China National Petroleum Corporation (CNPC) expects to put a US$2.5 billion pipeline online later this year. The oil and gas conduit runs for more than 800 kilometers through Myanmar.

The pipeline begins in Andaman Sea oil fields off the coast of Rakhine State. From the ocean, the CNPC conduit then traces its way through Myanmar towards its ultimate destination, an Anning refinery. Before crossing into Yunnan, the pipeline passes through Shan State, which has been embroiled in various states of civil war for more than six decades.

Fighting along the Yunnan border has cast doubt on the completion and efficacy of the CNPC pipeline. Several times in the past five years, tens of thousands of refugees from Shan State have crossed into Yunnan to avoid military actions. And as recently as this year, mortars launched from Myanmar landed inside the Chinese border.

China, which traditionally enjoyed close relations with Myanmar, has seen its influence in the country dwindle considerably in the past year. Officials in both Beijing and Kunming are no doubt watching Thein Sein carefully to see what surprizes he may reveal next on his tour of the West.