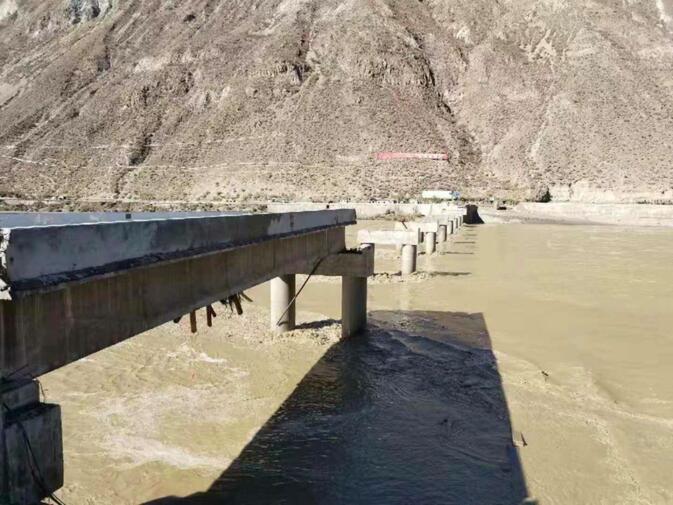 On November 13, China's National Emergency Management Department began draining a barrier lake in Sichuan created by landslides earlier in the month. The unleashed torrent of water ripped down a bridge on the Jinsha River and flooded downstream areas in Yunnan province, including parts of Diqing and Lijiang prefectures.

Officials estimate the amount of water released into the Jinsha River (金沙江) — otherwise known as the headwaters of the Yangtze — at more than 490 million cubic meters. The resulting flood washed away a 270-meter long bridge across the Jinsha in Sichuan's Garze Tibetan Autonomous Prefecture. News reports suggest rebuilding the span along the busy highway into Tibet will take at least a year.

As the released water continued to flow south, Yunnan authorities warned people living along the banks of the Jinsha River to evacuate. Shigu (石鼓), where China's great river turns and heads east, was particularly hard hit on November 14. Military units and local police worked together to help residents, especially the elderly, flee. The iconic 'First Bend in the Yangtze' was hit so hard by the onslaught of water that it is nearly unrecognizable.

Even further downstream, Tiger Leaping Gorge (虎跳峡) and Lijiang (丽江) were also seriously affected by quickly rising river levels. The gorge is now closed to tourists and, as of this writing, the elevated observation decks above the typical river level remain underwater.

As the torrent approached, the city of Lijiang issued its highest-level emergency warning to alert people of potential danger. According to a circular released by the Lijiang government early on Wednesday, the floodwater would reach the area at around 9pm the same evening.

Hours after the warning in Yulong County (玉龙县) — located west of the prefectural-level city of Lijiang — the Jinsha River rose nearly three meters in less than 30 minutes. Riverside roads and highways suffered severe damage and many are now closed. Meanwhile, the local electrical grid, internet services and phone utilities are down or sporadic across the area.

Water levels across the region continue to rise and at least 30,000 people have moved to higher ground. GoKunming also received reports of tourists being obligated to leave areas like Liming (黎明) and Laojunshan National Park (老君山国家公园). As of yet, there are no casualty reports or cost estimates concerning damage to the region, but it is clear cleanup and recovery efforts in Yunnan and Sichuan will take months.

Dams are Not the all-good source of energy generation.
Was a lake backed up by a landslide, okay, but did some idiot go about draining it the wrong way? If so it will be interesting if said idiot is reassigned to other work where he won't be threatening lives and property.
Did it make sense to build the dam there in the first place? If not, who thought it did?
Meanwhile the people in the area... well...

Oh wow... And the road from Shangri-La to Lijiang appears to be closed... heard some tourists who were supposed to go to Lijiang today are stuck in Shangri-La.

Kick me for not reading properly - seems this had nothing to do with any constructed dam. Mea culpa.

I was going to mention that. Also If there were (even) more dams and associated buffer lakes along the river, then those (unless already full of course) could dampen the impact of this kind of natural disasters further along the stream. But that would be man vs. nature of course, at cost of nature.

If the barrier lake had filled, and then dam collapsed, the impact would have been much greater. An interesting follow up would be about formation of development of this barrier lake, and what led to the decision to act.

it's still unclear to me if it's the same one (reports are often very vague about locations), but a barrier lake formed on the Jinsha river in October already:

I rode across that bridge. It's going to be a pain to rebuild since it's isolated from any other infrastructure. Also, pretty sure there isn't a detour besides backtracking many hours.