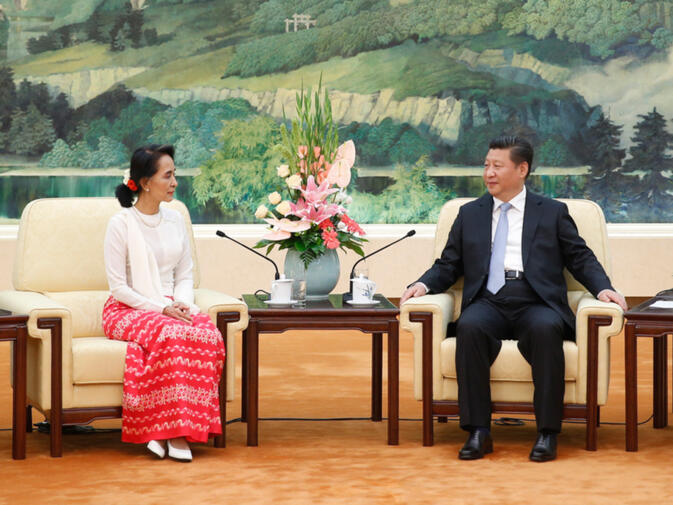 Myanmar's main opposition leader, Aung San Suu Kyi wrapped up her first ever stay in China over the weekend. After stops in Beijing and Shanghai, she came to Yunnan and met with provincial Party Secretary Li Jiheng (李纪恒), speaking to him about stability along the border as well as future trade and investment opportunities.

Suu Kyi first arrived in Beijing, where she met with Chinese President Xi Jinping and Premier Li Keqiang. She was greeted in the Great Hall of the People and later taken to see the Great Wall. During their talks, Xi stressed the importance of China's long-term relationship with Myanmar, traditionally strong trade ties. Addressing relations that have recently grown tepid, Xi assured the Nobel Peace Prize winner that his government will not meddle in Burmese domestic politics.

An editorial published during Suu Kyi's visit by state-run Xinhua News echoed this sentiment. It also raised the issue of a civil war in Myanmar that has twice spilled over China's southwestern border in Yunnan. "China has no intention to interfere in Myanmar's internal affairs, but is determined to protect its citizens from being caught in a war launched from the other side of the border," it read.

While in Kunming, Suu Kyi and members of her National League for Democracy (NLD) were greeted by provincial Party Secretary Li. The two met on the sidelines of the third annual China-South Asia Expo, where they not surprisingly discussed bilateral trade. China is Myanmar's largest trading partner and Beijing is keen to increase commerce flowing into and through Myanmar as part of its Belt and Road Initiative, a sprawling plan to more closely link China's economy with those of South and Central Asian countries.

Many in the foreign press had conjectured Suu Kyi could use her time in China to raise questions regarding human rights and the impact of Chinese-funded infrastructure projects in her country. However, such issues were not on the agenda in either Beijing or Kunming. Before Suu Kyi arrived in China, Nicholas Farrelly, director of the Myanmar Research Center at Australian National University, presciently told the New York Times (requires proxy):

For her there would be very little value in getting offside with the Chinese government...And there would be much to be gained by increasing the level of confidence that the Chinese authorities would feel about her stepping into a senior position in Myanmar in the years ahead.

The NLD, of which Suu Kyi is head, is projected to make serious political gains during nationwide elections scheduled for November of this year. Although she is currently barred from running for Myanmar's top office, Suu Kyi is expected to hold significant policy sway should her party triumph.

Indeed, Suu Kyi's trip seemed designed as a way for both sides to reassure one another. Chinese leaders hope to bring whichever party wins Myanmar's elections back to the fold following nearly five years of stumbling relations. For her part, Suu Kyi was conciliatory and at times complimentary, saying in Kunming that "Myanmar and Yunnan have many similarities, and the [province's] development experience is worth understanding" and duplicating.