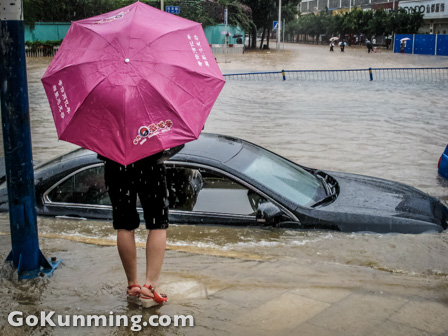 A ruined car, left overnight with its windows down, on Beijing Lu (image: Ben Campbell)

Torrential rains and flash flooding in Kunming have caused an estimated 84 million yuan (US$13.6 million) in damage to the city. Floodwaters have destroyed real estate and at least one person is missing, according to a report by the Yunnan Provincial Department of Civil Affairs.

Initial reports estimate flooding affected more than 77,000 Spring City residents. That number appears to be an extremely conservative evaluation as thousands of ground-level residences and businesses have been completely inundated.

Flooding snarled traffic in low-lying intersections and covered parked cars in almost a meter of water. The north and east of the city appear to have borne the brunt of the flooding.

Areas around the Railway Museum on Beijing Road were completely cordoned off as underpasses were submerged by over four meters of water. Emergency crews worked long into the night in often vain attempts to drain floodwaters. 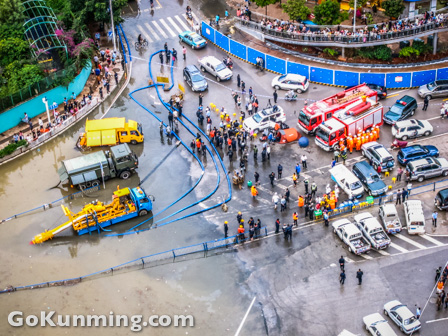 A bird's eye view of emergency workers trying to clear water from an underpass at the city's North Railway Station. At its highpoint, water was roughly four meters deep in the underpass. 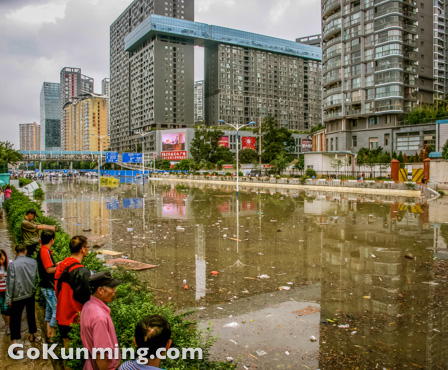 A view up Beijing Lu, where the under-construction subway was completely submerged. 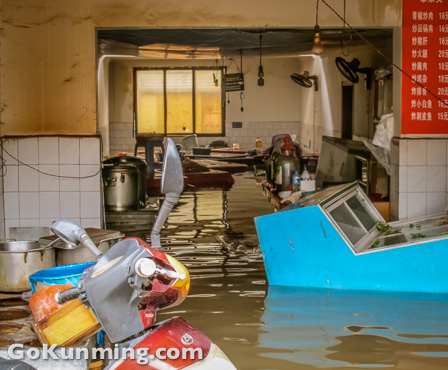 A ruined restaurant sits under more than a meter of water. Two friends make their way through a flooded intersection on a tricycle. 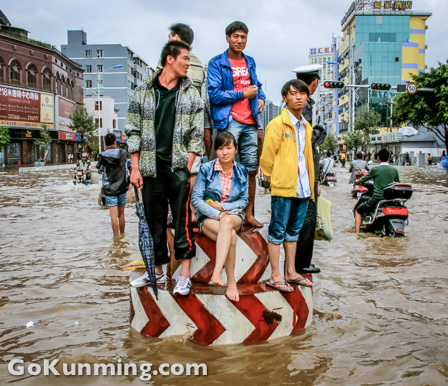 A traffic police officer shares his island with stranded pedestrians. Flooded fields at Kunming's University of Finance and Economics. A man assesses the damage inside his flooded apartment complex. 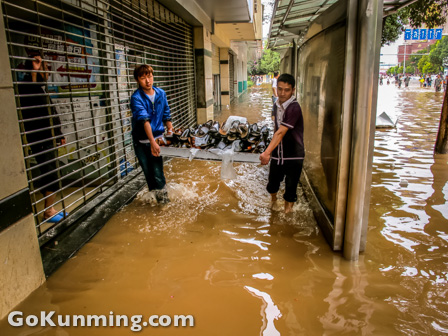 Shopkeepers try to save some of their inventory amidst rising waters. 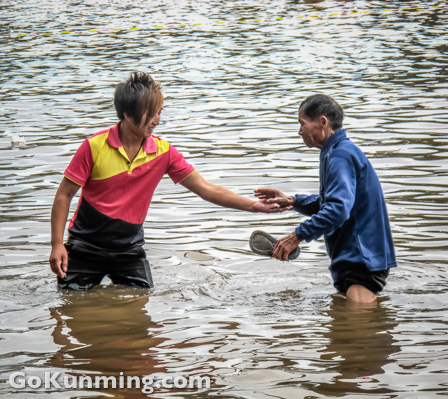 A young man helps an elderly man navigate the floodwaters on Beijing Lu. 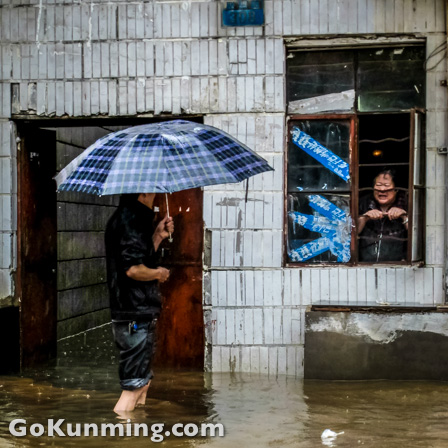 An elderly woman asks a passerby for help with her flooded shop. 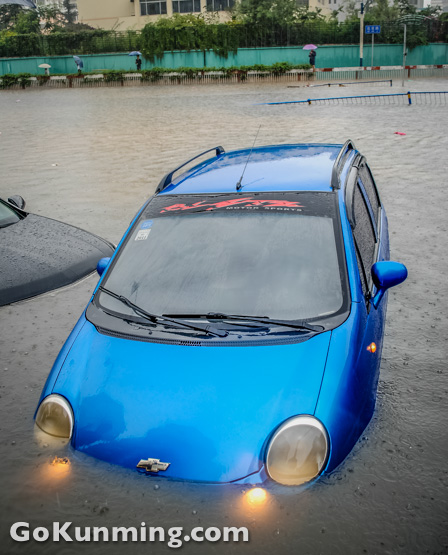 At least the battery and lights still work. 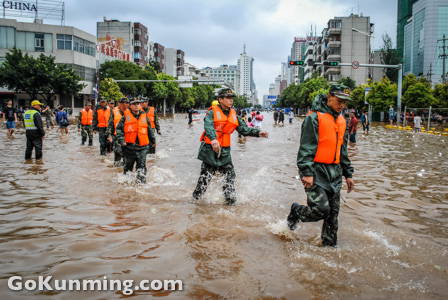 Emergency workers were dispatched to several major intersections around Kunming. Although people attempted to drive, water around the city ultimately brought traffic in low-lying areas to a standstill.

Editor's note: Special thanks to photographers Hugh Bohane, Ben Campbell, Colin Flahive and David Tsang for getting their feet wet and providing GoKunming with the above photos.

Great pictures, absolutely love the one of the young guy helping out the old gentleman.

Wow. It was even worse than I thought.

It's kind of ironic that the yellow truck they are pushing has the words "Flood Prevention and Water Drainage" written on its side.

Saw people pushing dead ones through the water that was over the level of the motor., I would not buy any electric bikes second hand for a while. Especially if they are almost new.

Having been living in Kunming for almost a decade, I consider KM my adoptive home. It just makes me so heart broken to see the Spring City ravished in what could've been preventable.

This is the result of years of poor urban planning focusing on grand slogans of little substance, the constant push by government officials to develop superficial projects at unrealistic speeds that they can boast in their resumes while lining their own pockets. The corruption that is abound just sickens me. This is pure criminal negligence. It seems the paper tiger is back with a vengeance.

I agree. They really need to pay more attention to the infrastructure. The sewer system and water systems need to be fixed.

Think of all those cars parked in the parking lot in the low lying level. They must all be ruin! Wow! Don't buy and cars or e-bikes for a long time.

Great pics! I really like the last one, Makes me think of wake boarding!! hahah

I wonder if government offices are going to be closed on Monday due to these floods? I have a Z visa, should be arriving in Kunming on Monday to get my visa conversion done because one document "expires" on the 23rd, but perhaps the officials will be a little lenient due to this flooding situation. I don't want to inconvenience myself or people around me by showing up when the city is experiencing a major flood like this. Perhaps I'll hold off coming for a week when things settle down a bit.

While I mostly share your sentiments towards grandiose and hollow urban planning, I'm not sure I see the connection between that and the recent flooding. The fact is that a freak amount of precipitation fell on Kunming in a short period of time, overloading the sewer system. Granted, I wouldn't be surprised if that side of Kunming's infrastructure has been neglected in recent years, but I don't think it's fair to blame the weather on the government. Many cities, both in China and in the West, would have faced similar flooding in such circumstances. Where I'm from in California, we regularly faces flooding far more severe than what happened in Kunming this week.

There is the same problem in Shanghai and Beijing, the drains are not up to coping with the heavy rains, even though they come yearly.

Urban planning is often about sprawl, without the effort to upgrade the old infrastructure. The norm is to jus connect the new drains to the old. The new drains may even have sufficient capacity, but there is a bottle neck as water reaches the old drains. Until there is the political will to dig up and replace the drains in the older parts of the city (costly and very disruptive to local residents, traffic, and business) we will continue to see occastional flooding. It used to the be same in many towns in the west.

I read on someone's facebook that they had read that this was a result of the city shutting off the drainage because they didn't want water getting into the new subway line. This person's same post said that 300 people have been killed as a result. Is this true...have any of you heard the same?

@Geogramatt
It was a rant so I was being unfairly harsh, however, I too am from Cali, in the San Gabriel Valley to be more specific. I think back home we have a similar situation in which we don't normally get a lot of rainfall but once in a while we do get a huge down pour. During those times flash warning watches are issued and we do get localized flooding, but we are talking about a few inches in a low lying spots not flooded underground parking garages, flooded tunnels and underpasses like we are seeing in these pictures. I would imagine when building underground parking garages and underpasses like those in the Northern Train Station, flooding is an issued thought of and resolved in the designing stage. A simple pump or a drainage pipe leading to a lower lying ground while might not have completely prevented damages from this storm, it would have significantly mitigated it.

My point being that if the government officials would actually care about their stewardship of the responsibilities in which they are entrusted instead of chest thumping, a lot of lives and property could've been saved.

@Seashorse, could you further elucidate this scenario in which closing off the city's drainage system would result in LESS flooding of subway tunnels?

The recent flooding here reminded me of similar flooding in Beijing and Los Angeles. It seems the onset of seasonal heavy rains results in underpass flooding. In Los Angeles and Beijing, part of the problem is the accumulation of trash in storm drains. The volume and force of the rain moves the trash until it collects and restricts water flow. In both L.A. and Beijing, in the days following flooding, crews were busy opening drains fishing out trash. In subsequent weeks, flooding seems to diminish.

I agree with tigertiger's analysis of contributing factors. I would also suggest the rapid construction throughout Kunming impedes and diverts natural runoff paths resulting in unplanned volumes of runoff showing up in unplanned locations.

Talking of construction. One solution is to build a new town from the ground up the adequate infrastructure. This was done in Dali and oops, Chenggong. Shanghai has also built a number of satellite cities/towns.

The accumulated debris is a problem and not all of it is trash, a lot of it is leaves, twigs, and dust/dirt. Often this can not be effectively dealt with until it accumulate. You can have teams going around clearing culverts and grids, but not every bit of debri that could potentially reach the culvert.
This is a universal problem.

I'm in the states right now. Anyone know if the flooding reached Hong Shan Dong Lu?

I don't suppose there there any flood maps or elevation maps that show which areas are lowest in Kunming?

Anybody know where the flooding occurred in Wuhua?

I too am in the states right now - what's it like today? I see that there is more rain in Kunming for the next week...

I wonder about the quality of food and possible contamination. In a city that doesn't seem to have very high regard for hygiene anyway, I'd stay clear for anything from markets for a while, given the amount of faeces floating around and undoubtedly tainting foodstuff. Also, restaurants (usually on the 1st floor) with flooded kitchens may not be the best place to go eat for some time to come.

@LaoQingwa and laoshi19, I just arrived back in Kunming today. Today the weather was partly cloudy with plenty of sunshine and comfortably warm temperatures. I was told the past 2 days have been similar. It seems that the weather forecast is not very accurate - my hunch is on partly cloudy skies, with some possibility of overcast skies and light rain being more likely over the next few days but probably nothing like Kunming experienced last week (well, at least, hopefully not).

There is no evidence left of the flooding which affected Kunming mainly last Friday. I too was worried as evidenced by my earlier post, but it seems that even the most low lying areas around Beijing Lu, which were most flooded and the rest of downtown are back to normal - I drove through there from the airport today and everything is business as usual.

my balcony has 2 inches of water. apparently, they don't learn about drainage in construction here. oh well. nobody's perfect. i'm estimating that it will take another 2 weeks to dry up.

Holy cramoly! I"m moving to Kunming at the end of August to go to school. I hope that school at Yunnan Normal Uni and Yunnan Uni won't be interrupted. Wowza...those were some pretty amazing pics, but I don't know how keen I am to get soggy. Fingers crossed that there won't be another flood like that in the next year! PHew. Thanks everyone for the info!

Relax. This was a fluke. It will rain again but nothing like this.