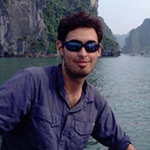 Jordan came to Kunming in 2015, ostensibly to teach English and learn Chinese. He knows this a cliche plan. While the ‘learning Chinese’ part has yet to pan out, the English teaching is going well. In his free time, he travels around Yunnan and Southeast Asia. He is also an intern and contributing writer at GoKunming. You can find him on Facebook, LinkedIn and his blog.

May 1: Workers of the world, unite!

An astronomical monster grows in Guizhou

Exhibition and Auction by Kris Kinder

Rootless Live at The Turtle Bar!