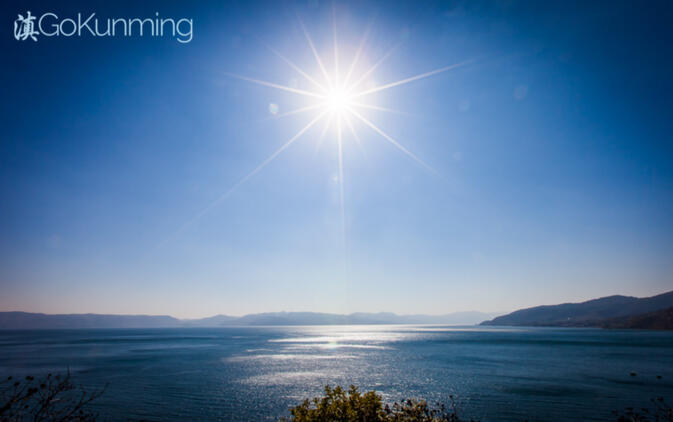 Fuxian (抚仙湖) is reputedly the cleanest lake in China, and also the deepest, containing an estimated ten percent of all the lake water in China. With the squalid Dianchi Lake (滇池) only 25 kilometers away, Fuxian is routinely showcased as a shining standard for environmental conservation in Yunnan. This elevated status is part of the reason three tourists are currently being eviscerated on Chinese social media.

The group was photographed bathing near a hot spring that feeds the lake by another unrelated traveler on September 12. While swimming is allowed in the lake, one of the trio was caught on camera washing her hair with shampoo. Once the image was published on Chinese social media the firestorm began, and continues unabated nearly two weeks later.

Starting in 2007 with a law entitled Protection Regulations for Yunnan Province's Fuxian Lake, preservation of the body of water has fallen under the auspices of the provincial government. Motorized boat traffic — excluding emergency watercraft — was banned and dozens of other prohibitions resembling those enforced by national parks in the United States were put in place. 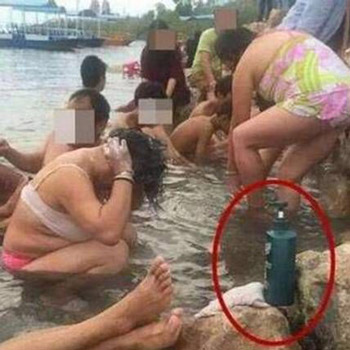 With this level of protection, local environmental awareness has grown tremendously over the intervening nine years, and now residents living around the lake have become sometimes vocal advocates against littering. Many people circulating the photo and commenting on it via Weixin and Weibo are operating under the assumption that the photographer was a Fuxian local using online shame to, as the Chinese idiom goes, "kill a chicken to scare the monkeys".

In addition to countless posts and discussions on social media, press outlets across the country seized on the misdeed to highlight the growing sense of environmental awareness amongst China's citizenry. One can only hope that such concern over Fuxian — the shores of which are ever more crowded with resorts and tourists — will prompt people around the country to think twice before littering.

using online shame to, as the Chinese idiom goes, "kill a chicken to scare the monkeys".

Chengjiang at the north of the lake has recently established a new sewage and runoff treatment and filtration system partly based upon a series of ponds and reed systems and extensive gardens along the foreshore. This helps to reduce the intake of detritus carried in post-rain flash flooding due to runoff. Assuming that system works as advertised, then the biggest issue Fuxian faces is not shampoo, but agricultural runoff. So far it has not had an algal bloom like northern Dianchi, but perhaps this is mainly because of its size and depth. Certain parts of the lake water near agricultural outflows are definitely polluted, with intensive chicken farming visible almost on the water in one case. Another big polluter is the military, who maintain a submarine base and a number of large ships which spew oil across the water every time they are operated.

THE NATIONAL GOVERNMENT SHOULD SEND A TEAM OF INSPECTORS AND RESOLVE THE PROBLEMS, THE LOCALS ARE INCAPABLE.

The lynch mob mentality is the real focus of shame here.

And then there is the egg farmer, with the run off from the chicken slurry polluting the north shore. The smell of chicken slurry was very noticeable some days.
Perhaps the authorities should look at local serial polluters before going on the rampage about the occasional bad tourist.

1 - Once the image was published on Chinese social media the firestorm began, and continues unabated nearly two weeks later.

2 - although some more vocal microbloggers have called for a police investigation and arrests.

I can teach reading and comprehension for a small fee.

Fuxian isn't the deepest lake in China (it's third). No way does it contain 10% of China's freshwater, considering the vast number of even larger lakes in Tibet, Qinghai, and central China. It's not even bigger than Dianchi or Erhai in Yunnan. But it is clean.

Strikes me a warranted attention to a serious problem (the general lack of concern for practicing environmental responsibility, not the specific incident), not a lynch mob. I think this is a plus, whether or not the hairwashers in question are found.

Voltair is 100% correct...
THE NATIONAL GOVERNMENT SHOULD SEND A TEAM OF INSPECTORS AND RESOLVE THE PROBLEMS, THE LOCALS ARE INCAPABLE.

In addition..
it was common to find open/ empty pesticide envelopes and bottles on the lake shore prior to having garbage removal system from creeks and ditches flowing to the lake. so now you cant see the garbage but the poison runoff IS there.

The local officials are filled with greed which makes income from friends more important than protecting the water quality..

The situation in Dali is the same.

Chinese citizens look forward to a bright future? not so with the middle tier corruption.

This furore exemplifies several things: entrenched sexism in Chinese society; contempt for "low quality" people from those who consider themselves their betters; highlighting the trivial and ignoring the important; making gestures and moralizing as opposed to taking effective action to solve problems; the real polluters will be laughing heartily at this "story" .

If she's a tourist, why couldn't the lardy blob wash her hair in the hotel?

Big fuss about this and yet people leaving their car engines on while parked, smoking in public places including enclosed ones like lifts, throwing litter on the ground or into rivers all go unnoticed, and not cared about. Note: most of the offenders of these other environmental/health misdeeds are men. Cloud is right.

*I should have typed 'male', as many are boys too.

Anything anyone knows about this is derived from one photograph. The one woman being metaphorically 'lynched' and personally insulted (see disgraceful comment from Pooliekev above) has, thus far, been found guilty of .........nothing. If and when she is ever held to account and found 'guilty' it will quite possibly be nothing more than contravening something akin to a local 'by-law'. In no way do I dismiss the importance personal responsibility in terms of environmental protection but this situation is absurd. I would seriously like to meet this woman to find out how much this has affected her life and those around her. Meanwhile, if I was given a choice between going to dinner with this lady or Pooliekev then the lady with the clean hair wins. And is that 'shampoo' or a new brand of Fuxian Environmentally Friendly washing liquid? I don't know and neither does anyone else. Meanwhile GoKunming is allowing this website to be used by one member of the mob to personally insult this lady because of her physical appearance. This is one of the uglier aspects of social media in action.

Totally agree nnoble. You said it all.

Mike and I have both lived there for extended periods, so we are very aware of the general situation.

The lady is not the problem, it's the ineffective bureaucracy where nobody is willing to take charge or devote time, effort and resources towards migrating the uneducated local agriculturalists, industrialists, property developers and military toward environmentally sustainable farming, building and navigation.

Beijing needs to get involved.

If this bathing carries on unchecked it'll be so sad as the water in that lake is one of the cleanest in China. I spotted cans, bottles, plastic bags and other waste along its banks last time I was there. Oh dear......

'I'm surprised nobody issued a flood warning'. Couldn't resist being puerile and offensive.

The law is quite clear, Beijing owns FuXian lake, while the managing of this resource is shared. Half of the managing is accomplished by the uneducated and corrupt local government, while the other half is Beijing.

Corruption to some extent, probably; but why 'uneducated'?