An astronomical monster grows in Guizhou 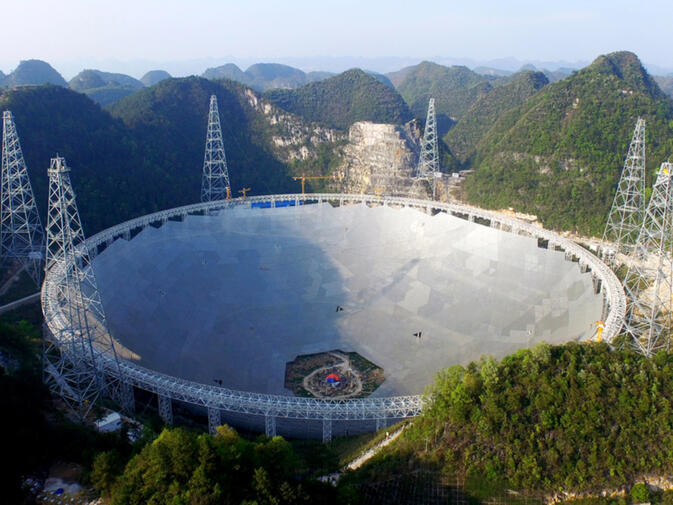 In a country where bigger often equates to better, a truly massive science project is about to go online in Guizhou. Approximately 170 kilometers southeast of the provincial capital Guiyang, within a Karst depression in Pingtang County (平塘县), construction is nearing completion on the world's largest radio telescope. At 500 meters in diameter, the telescope, which has been dubbed the 'Five-hundred-meter Aperture Spherical Telescope', or FAST for short, dwarfs all predecessors. In Puerto Rico, the 53 year-old Aceribo Telescope comes in next at 305 meters.

In this case, such gargantuan size works to the project's benefit. Radio telescopes, as opposed to standard optical variants, rely on the absorption of radio waves to gather data. This is similar to how ears take in information versus eyes. As such, the bigger the radio telescope, the greater its volume of input, and thus the higher potential for discovery.

This helps explain why Guizhou was chosen. With an average of only 1,150 sunshine hours per year, Guizhou is the least sunny region of China. While an optical telescope would be laughably inadequate for such conditions, it is perfect for radio telescopes, which do not require clear skies to listen to the universe. Guizhou's fairly sparse population and stable Karst topography were other major considerations.

Heading the 700 million yuan (US$106 million) project is Professor Nan Rendong of the National Astronomical Observatories at the Chinese Academy of Sciences. He envisions several important tasks for the telescope — which is made up of 4,600 triangular sensor panels — once it goes into operation in September. With its immense size, FAST is expected to be able to 'listen' to previously unstudied parts of the universe at distances of hundreds of millions of light years.

First and foremost among these will be the search for an understanding of the nascent universe, particularly as it relates to ancient traces of hydrogen. The second priority will focus on the research of pulsating radio star, which emit enormous, and potentially destructive, amounts of radiation. Lastly, the development team headed by Nan hopes that the telescope will become a crucial component in the search for extraterrestrial life.

Such experiments are not without a human cost, however. In order to construct the telescope, the village of Daowodang was summarily demolished, and its residents relocated. Unfortunately, radio telescopes, especially ones of such colossal size, are extremely sensitive to interference. As such, every additional village within a five kilometer radius of the project site has been subject to a mandatory 'radio quiet zone'. This means no wireless networks, no cell phones or any other technological item that has the potential to interfere with the telescope's data gathering.

Resulting reports indicate that an estimated 9,000 villagers have been affected by the regulations. In response, Professor Nan has stressed the telescope's long-term potential, saying, "It will attract a lot of scientists and tourists, and it's also a very good model for education, for the next generation, and for Chinese industry".

There's an excellent "interactive" report on this hereL

+1 For that BBC article, reading it the other day and thought it was one of those that can catch lots of peoples interest in a subject. Not just the telescope but the rest it goes on to discuss as well.

I wonder if tourists are allowed or is it going to be considered military?

Thanks for the BBC link. Really nice pictures in that article.

To piggyback Guizhou giveaway post, which has disabled the comments, just last week Guizhou government officials have signed a 50/50 joint venture deal with HyperloopTT to build China's first Hyperloop in the city of Tongren, which is located in eastern Guizhou.

This airless, levitation tube transport system is designed to travel faster than commercial airplanes at top speeds of 1,223 km/h. Both Elon Musk and Richard Branson are racing to be the first to implement their versions of the hyperloop abroad, besides their space race to Mars.

The Hyperloop construction is set to begin next year. Tongren transport & tourism ministries plan to connect to Mt. Fanjing (50 km northwest of Tongren) via this open-source, vacuum transport technology... hopefully linking up with our Yunnan down the line.

This thing may well contribute to the solution of serious problems on earth, but I have a strong feeling that the really serious problems will be given a rather low priority by those who have the power/influence to assign priorities.

Guizhou is one of China's poorest provinces. I'm pretty sure there are better things to spend its money on than a 50 kilometre hyperloop white elephant...

It's why the state and provincial governments are trying to attract foreign investments here by setting up high-tech, infrastructural launchpads in luring human capital. Behemoth data storage centers for Apple's iCould and Tencent's WeChat are also both cementing their presence in Guizhou,

They're borrowing from the playbook of Deng Xiaoping's SEZ reforms. Transforming a rural fishing village prior to 1978, to the global powerhouse that is modern Shenzhen. In this case, promoting Guizhou as targeted, tax-incentivized FDI zone of strategic technology, in hopes of trickle-down spillover growth throughout the province and beyond. Long-term foresight from the lessons of hindsight.

@bilingualexpat:I wouldn't call trickle-down 'long-term foresight' - yeah, it happens, but it's pretty minor in comparison to both needs and the amount of capital that comes in.
@cloudtrapezer: the 'thing' I was referring too was the radio telescope, not the hyperloop, which I agree could be called a white elephant. I wouldn't call the radio telescope a white elephant', although its construction, despite the fascination of expanding knowledge of the universe, doesn't represent the very reasonable priorities of most people

In comparison, short-term assistance for the poor would be giving them fish, whereas medium-term would be teaching them how to fish by ramping up budgets for their much-needed education & healthcare whatnot. Aforementioned "long-term" would be building them a fishing dock with radar-equipped ships so they could sail to the best fishing spots and eventually sell their catch; a wholesale industry ensues. A three-prong attack would be ideal.

Astronomical monsters are often built in the middle of nowhere. Less interference from human activity. Guizhou fitted the bill.

If I was developing super computers, I would expect to do it somewhere where I could work secretly. I would also want physical security for something that will become a vital part of the telecoms/economic infrastructure. Guizhou has a history of building secure facilities inside mountains.

On a slightly different note, Guizhou seems to be developing must faster than Yunnan and may even have overtaken it. Guiyang has transformed itself in the last 15 years, and seems to have already overtaken Kunming. Some people were obviously very hard at work, while others were resting on their laurels.

The 9,000 villagers from the article's last paragraph may disagree with your first paragraph.

do i trust the motives and reasononing of myown government at the moment? do i think they know what they are doing? probly a lot less than i do the chinese gov at the moment, esp given the recent purges

try and find a valley anywhere this side of the gobi dessert without a few thousand people in it.