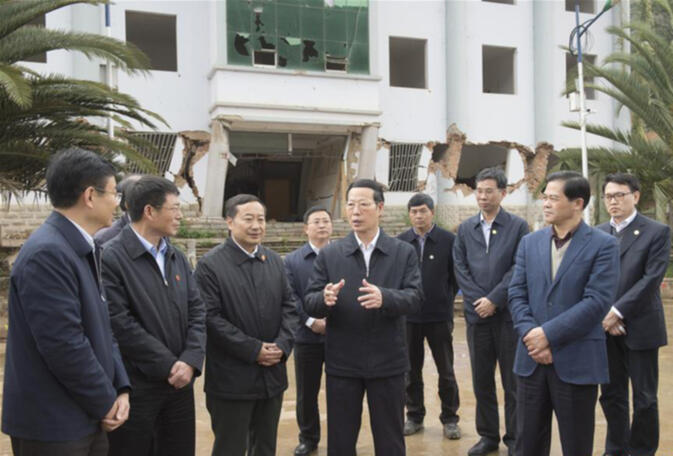 The mountains may be high and the emperor far away, but that did not stop Yunnan from hosting a high-profile visitor this past week. Zhang Gaoli (张高丽), China's senior-most vice-premier, visited the province on an inspection tour of green industry growth and tourism development in the region. Water resource protection and rural construction were also included on Zhang's busy agenda.

China has not one, but four people acting as 'second in command' in the event of the premier's incapacitation. Each one has different responsibilities. For example, the second-ranked vice-premier is meant to be responsible for education, health, sports, and culture, while the third focuses on agriculture, water resources, commerce and tourism.

Each sitting vice-premier is nominated by the premier — in this case Li Keqiang (李克强) — for a five year term, with the option of a one-term renewal. In addition, all four vice-premiers are granted positions in China's politburo. The topped ranked vice-premier — today, the position held by Zhang — is also given a place on China's elite Standing Committee.

Honing in on the man himself, Zhang entered politics in 1984, following his matriculation at Xiamen University and a fourteen-year stint at a state-owned oil company in the Guandong city of Maoming (茂名). He later left the company to become Party secretary of Maoming.

Rising through the ranks, by 1998 Zhang occupied the dual role of deputy chief of Guangdong province, as well as Party head of Shenzhen. Once decade later, he held the dual roles as both Party secretary of Shandong province and the megalopolis of Tianjin. In 2013, Premier Li appointed Zhang to the position of vice-premier. Over the course of his political tenure, Zhang has overseen such projects as the Three Gorges Dam and the implementation of portions of China's ambitious Belt and Road initiative.

With a political track record such as his, Zhang's presence in Yunnan lent itself to an air of immediacy. During his three-day trip to the province, he visited villages and townships in Xishuangbanna, as well as the Jinghong Hydropower Station (景洪水电站) on the Mekong River. Zhang then traveled north to Ludian County (鲁甸县), which was devastated by a 6.5 magnitude earthquake in 2014.

While inspection tours rarely yield any tangible results, a high-profile government visit does help elucidate Beijing's vision for a given area. Zhang's trip highlighted the need for Yunnan to speed up the process of modernization, especially in terms of the province updating its high-tech and tourism sectors, both of which involve greater international interconnectivity.

Strategically located at the head of Southeast Asia, a socially, economically and sustainably developed Yunnan stands to become both a conduit and motivator with those nations it borders — namely Vietnam, Myanmar and Laos. Internally, one example of this development plan is being implemented in Yuxi, a recipient of vast funds associated with China's experimental 'sponge city' concept. It appears after Zhang's visit, that if all goes according to plan — with Yunnan more successfully integrated into the greater Chinese vision — then the mountains may remain high, but leadership from Beijing will be closer than ever.