By Jordan Steinberg in News on September 2, 2016 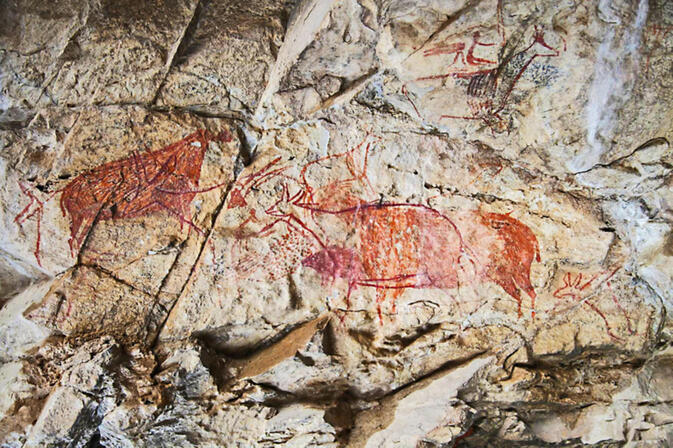 Earlier this summer, a branch of the United Nations bestowed one of its highest preservation designations on a little-known area of Guangxi province. The selection, which recognizes the importance of rock art some 16 millennia old, may have ramifications for younger but archeologically important sites in northwest Yunnan.

Beginning with Sumerian cuneiform script, recorded human history goes back roughly 5,000 years. Any further than that, the remainders of ancient civilizations and tribes are sometimes comprised only of rock paintings. At their most ancient, such as the Pettakere cave paintings on the Indonesian island of Sulawesi, some have been dated at 35,400 years-old.

In China, however, no painting comes close to rivaling that astounding age. At a comparatively young 16,000 years, the Zuojiang Huashan Rock Art Cultural Landscape is the oldest of its kind in the Middle Kingdom. Located in Guangxi province, the site encompasses a collection of rock art portrayed on limestone mountainsides. In July, the UNESCO World Heritage Committee recognized the cultural and historical importance of this region, inscribing it as the forty-ninth such site in China. With its ascendancy, the international organization described Zuojiang Huashan in the following statement:

Located on the steep cliffs in the border regions of southwest China, these 38 sites of rock art illustrate the life and rituals of the Luoyue people[...]. In a surrounding landscape of karst, rivers and plateaux, they depict ceremonies that have been interpreted as portraying the bronze drum culture once prevalent across southern China. This cultural landscape is the only remains of this culture today. 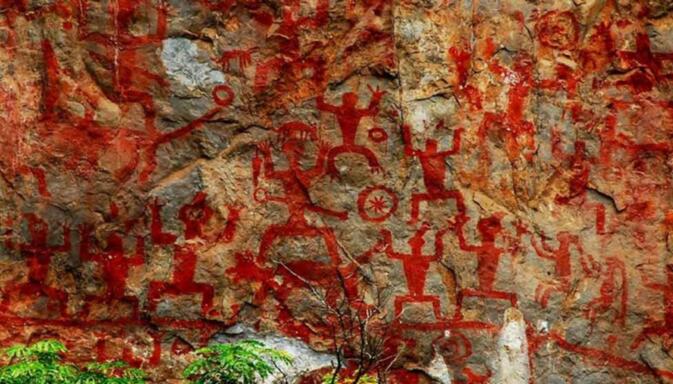 The newly-acquired UNESCO status has generated a renewed interest in similar locales around China. In Yunnan, the Jinsha River Rock Art (金沙江岩画) area is such an example. At 3,000 years old, dozens of similar rock paintings can be found along the Jinsha River where it demarcates the border of Yunnan and Sichuan. Depicting ancient dances, game animals and hunting rituals, the paintings are thought to have been the product of an ancient, but still mysterious, nomadic civilization.

As a result of the attention to ancient art in Guangxi, questions of preservation have come to the fore in Yunnan. In the case of Zuojiang Huashan, even with its newfound UNESCO protection, changing weather patterns and myriad construction projects — including dams, railways, and mines — are threatening the integrity of the ancient sites in a way the intervening eons never could. Due to its obscurity, Jinsha River Rock Art may be at even greater risk.

Considering the number of development projects along the Jinsha River region, the future of this art is in serious jeopardy. In particular, the Baihetan Hydroelectric Dam — scheduled for completion in 2021 — puts the entire area at risk. While the Yunnan Provincial Institute of Archaeology and the local cultural relics management department have attempted to implement a protection plan, tourists are reportedly taking the opportunity to visit the paintings while they still can.

In both Shangri-la and Yulong counties, Jinsha River Rock Art has been added to the list of national key cultural relics in need of protection. This makes the site eligible for preservation funds from national coffers, but those have not yet been forthcoming. Exacerbating the situation, the Jinsha River relics are located in one of the poorest regions of Yunnan — itself one of the poorest provinces in China. As such, any local funding has been scant, to say the least. At present, a mere two thousand yuan has been allocated annually, put toward the salary of a single man tasked with "protecting" paintings mostly hidden away on cave walls.

Check out what we found in Malipo, Wenshan last year: upload.wikimedia.org/[...]

Also nearby (also my pics on Wikipedia) was the amazing hanging tombs of the Ku people at at Bainitang (白泥塘): en.wikipedia.org/wiki/Hanging_coffins ... the Ku people are said to have moved down from the Jinsha River Rock Art (金沙江岩画) area, where the Bo people still exist but no longer have the habit of making new cliff tombs. This makes the Ku people the last cliff tombs builders in Eurasia, as far as my research can tell. Amazing stuff, and really out of the way / hard to find. Great adventure finding them!

Also note that the Bo people's area of the Sichuan/Yunnan borderlands was part of the culture the Chinese refer to as the Shu/Ba culture, which was a peripheral culture beneath the main Sichuan plains (various Shu kingdoms) that were conquered by the Han Chinese in the Han Dynasty. Period descriptions of Sichuan were essentially rainforested jungle with elephants, peacocks and other fauna... you can read more in the Classic of Mountains and Seas ... en.wikipedia.org/wiki/Classic_of_Mountains_and_Seas

Also in the Han Dynasty, onf ot the impassable steep rocky precipices of the area was bored through by a Zhuge Liang, thus opening a relatively direct and defensible route to Yunnan.

I really appreciate this article and topic-

Would be great to dig a bit more and do some follow-up. More media, interviews or developments from folks connected with the sites, protection agencies or the development projects that are posing the potential harm.

Only 2000 yuan per year because it's only ancient Chinese history.....