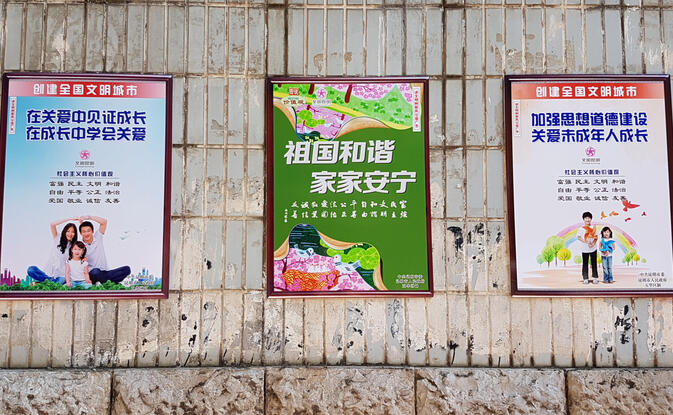 The posters, recorded messages and other constant reminders are pervasive. Thousands have been hired to tidy up, paint stuff, install things, repair ancient potholes, attempt to control traffic and otherwise look extremely busy. Something is very clearly up in the Spring City. But just what is this immense effort to create Wenming Kunming (文明昆明)?

Like a lethargic student preparing for an important test, the city is gearing up for a final exam of its own, one that has been in the making for nearly three years. Soon, or maybe even today, auditors from Beijing will arrive to poke, prod and inspect to see if Kunming cuts the mustard in terms of being a 'Civilized City' (文明城市).

The honorific is awarded by a government entity called the The Central Steering Committee for the Construction of a Spiritual Civilization (中央精神文明建设指导委员会). In the case of China's Spring City, all the current jockeying to receive the title may be an extravagant case of keeping up with the Joneses. Kunming, it turns out, is one of only three provincial capitals not to have been awarded the 'Civilized City' moniker, the other two being Haikou (海口) and Xining (西宁).

A municipality must meet a series of stringent criteria to garner the coveted name. These standards include, but are in no way restricted to, cleanliness, morality, understanding of common sense regarding transportation, prevailing levels of politeness, overall citizen satisfaction with government services, and the functionality of a city's utility service sector.

And so, beginning earlier this year, Kunming officials from seemingly every bureau imaginable rolled out extremely lengthy to-do lists. Woe-begotten city management officers were ordered to scrape years' worth of accumulated handbills from business and apartment building facades. Trash trucks across town were repainted, as were many overpasses, public restrooms, schools and hospitals. The bulbs were changed in thousands of streetlights burnt out long ago. The list goes on and on. 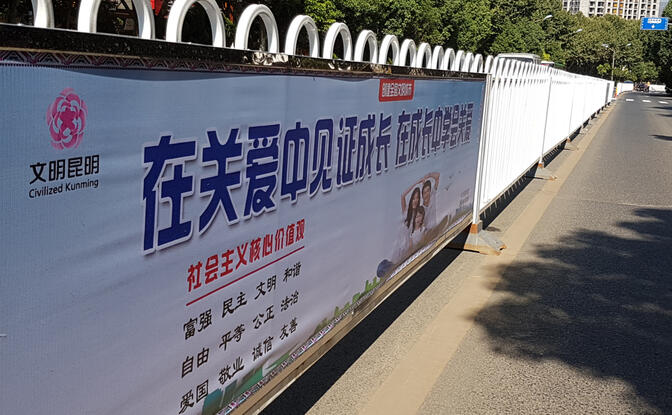 Beyond sloganeering, orderly traffic is also a serious point of concern. Over the past few months the Kunming traffic police have put up 28 kilometers of fencing designed to clearly separate car, bus and bicycle traffic. The city has also recruited more than 4,500 auxiliary workers and volunteers to tame sometimes unruly traffic until the end of July. Beginning in April, 1,100 railway police were deployed to streets around Kunming Train Station to stop people on bicycles and electric scooters from running red lights. This endeavor will also continue through July.

Military personnel are in on the act as well. Some 5,000 officers, soldiers, reservists and their spouses have spent the past two months working to clean up neighborhood dumpsters and corral stray trash. In total, they have reportedly collected 1,100 tons of garbage and cleaned up 198 kilometers of road.

And still the list of things to be done goes on. All 10,000 taxi drivers working in the city must be issued new uniforms this month. Meanwhile, every municipal government employee — as well as those in state-owned companies — was sent an identical text message. It warned of auditors riding public buses checking to see if the elderly who are given seats say 'thank you'.

The process of being inspected and scored as a 'Civilized City' candidate takes three years. For Kunming, steps were first taken in 2015, then again the following year, and now — at some unannounced point — in 2017. A given metropolis receives 15 percent of its total score the first year, 25 the next and 60 percent at the end of the evaluation period. The name is an honor only, and comes with no tangible rewards. No matter the outcome, Kunming's creeping nightmare of fastidiousness will come to an end soon. 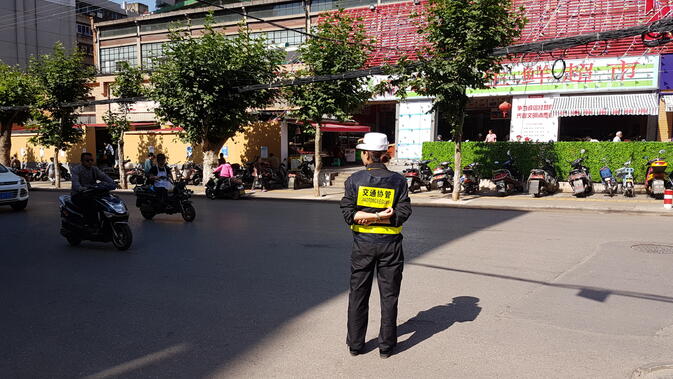 Wow. That explains a LOT! Thanks

The last sentence says it all;-)

It's all for show. Once there are gone, it will be the same old song.

Indeed more fenced off area but within days they have removed some poles and they are parking cars on the pavement again.

Culture takes generations to instill, generations to extinct. Let's hope this is a good, consistent, and sustainable start as opposed to an empty superficial gesture.

A pantomime. But I've noticed many seem enter into the spirit of the 'game.'

"checking to see if the elderly who are given seats say 'thank you'."

That's definitely a tough pass, I can't remember ever getting a thank you from an elderly person for any kind of polite gesture (holding doors, picking up something they dropped etc).

Overall, even if it all goes lax afterwards it must have some kind of longer term imprint on the city.

I rather think it will have a positive effect, especially on the traffic, but it may take awhile.

Well, they did fix a lot of potholes and repaved whole streets that were all cracks, so some permanent good did come of this.

"The city has also recruited more than 4,500 auxiliary workers and volunteers to tame SOMETIMES unruly traffic until the end of July."

Please cut the SOMETIMES, it just lets me lol and i can't stop it! ;)

I might also have had an impact on the clearing of traders, legal and otherwise, from some parts of town.

Unrelated, but funny. I saw a guy piss on the wenming chengshi ad in the middle of the day nearby Cuihu.

Civilization is a level of governmental complexity, not a moral category. That said, I will continue to say "thank you" when appropriate.

I hope the shi chang will not be abolished like street vendors have been, so that everyone has to shop at Walmart!

Probably this is why I can't rent the back seat of a scooter at a subway station any more. Too bad there are no taxi stands at the stations.

@Kongming: Yeah, but whether it's governmental (or corporate capitalist) complexity or a moral category, if or when Walmart comes to represent 'civilization' anywhere, we're in deep doo-doo.

Among other things, I'm guessing this explains why they revamped the previously lively bazaar and street food strip of a road behind Carrefour at Longquen Lu / Baiyun Lu intersection.

All pop-up establishments were removed, making the road more accessible to cars, and leaving only those shops and restaurants which have presence in the houses by the road.

It's a shame, in my opinion.

Can the title be lost next year if the city lapses back into chaos, or is it a permanent title regardless of what happens? It'll be interesting to see what happens after July.

Even our neighbourhood office has had a lick of paint!!
Next they'll even try and stop people spitting!!

surely stopping people spitting and pissing on the floor should be the first order of business, not filling a few junctions with cones and traffic nazis.

@Ocean: So has my stairwell, in a 25-year-old building. They did a sloppy job, however, although it's definitely better than it was.
Over quite a few years, I've seen public spitting reduced somewhat. I think this trend continues.

Great article explanation for foreigners living in Kunming! This is the best thing that has happened to KM in years, albeit for a limited time.

For those that frequent local vegetable & meat markets, a lot have changed for the better. Now they have verification stands with overhanging billboards electronically displaying updated produce prices as to protect consumers from getting ripped off by vendors. You can even re-scale your purchases at these check points by special personnel in uniforms.

You'd be surprise how much cheaper the groceries have become. Lets hope this cleaner and spacier shopping experience continues past July.

Is it all over now? Has the great audit happened? Can we go back to the normal chaos please?

They are still doing signage in our residential area. Maybe some remediation is required.

Oh yeah, the questionnaire was about Kunming wenming.

I think that they may be at it again.
We went to our open air market today and was told that it was closed until 16th, because of some civilized thing.
The workers are trawling through the local streams clearing out the weeds near where we live.
At 8am this morning there were uniformed traffic personnel along Dianchi Lu, and the uniforms looked bright/new.

Has anyone else seen or heard anything?