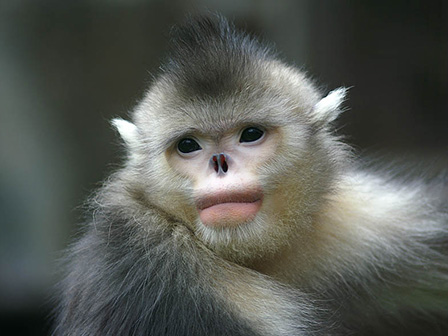 Rare black snub-nosed monkeys (滇金丝猴) are making a comeback in their native Tibetan habitats. The primates, called Yunnan golden hair monkeys in Chinese, virtually disappeared in the 1990s but populations have since rebounded significantly.

Forestry Bureau officials in Tibet assert that populations are growing due to increased ecological protection and strict anti-poaching initiatives in northwest Yunnan and southeast Tibet. In the past, population numbers dropped significantly when poaching snares designed to capture musk deer instead killed monkeys as they searched for food.

Twenty years ago fewer than 50 black snub-nosed monkeys were known to be living in the Himalayan foothills of Tibet. The primates — known scientifically as Rhinopithecus bieti — living in Tibet now number more than 700.

Their territory stretches from just west of Lijiang northward through Deqin to the Tibetan county of Mangkang (芒康) — roughly mirroring the Three Parallel Rivers Protected Areas. Little is known of black snub-nosed monkeys largely because they inhabit places scientists find difficult to reach.

The monkeys are adapted to living in evergreen and cypress forests at extremely high elevations and prefer to congregate on steep, wooded cliffs. Rhinopithecus bieti groups have been observed between 3,000 and 4,700 meters above sea level. The latter is the highest elevation recorded for any non-human primate species.

Population gains in Tibet mirror recent increases in Yunnan, although exact numbers remain unknown. It is believed that the total number of black snub-nosed monkeys living in Southwestern China now exceeds 2,000. Forestry officials expect that number to continue to rise.

Precise counts of individuals are made difficult not only by elevation, terrain and weather conditions, but also because black snub-nosed monkey groups tend to roam. An average group usually consists of 20-60 members and are known to inhabit territories of up to 135 square kilometers.