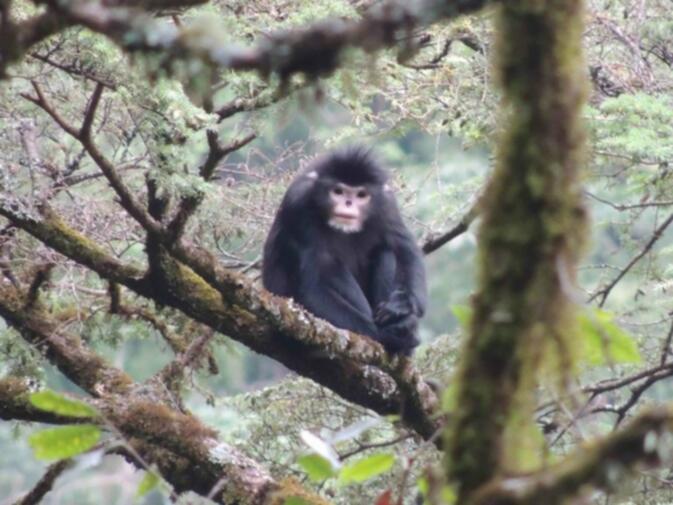 Even in a country as populous and enduring as China, pockets of undiscovered wildlife exist. This is especially true in the country's mountainous southwest, where primatologists working in Yunnan province's protected Gaoligong Nature Reserve have published a study on a previously unknown troop of critically endangered Myanmar snub-nosed monkeys.

The group of animals was spotted in the steep and densely forested eastern slopes of the Gaoligong Mountains largely by using automatic camera traps and infrared sensors. Researchers from the Institute of Eastern-Himalaya Biodiversity Research at Dali University, identified and then monitored the troop between 2013 and 2015.

Over the course of their three years in the field, researchers collected video and more than 200 still images of the animals — known by their scientific name Rhinopithecus strykeri — which live at elevations ranging between 1,700 to 3,200 meters above sea level. Study co-author Wen Xiao told conservation website Mongabay that studying the monkeys was trying work, saying:

Wet weather, steep terrain, dense forest and bamboo have been obstacles for us since we start[ed] our work on R. skrykeri in 2012. I have been working on the black snub-nosed monkey (R. bieti), which occurs at higher altitudes and latitudes for 16 years, and I will say that the difficulty of working on R. skrykeri is much [higher]. So any data we get is valuable simply due to its availability.

The data collected points to an apparently healthy collection of animals numbering at least 70 individuals. They are the first snub-nosed monkeys of their kind to be found living on the eastern slopes of the Gaoligong Mountians, although another separate troop had previously been observed living on the western side.

Only identified in 2010, R. skrykeri were first made known to scientists by trappers living in northern Myanmar's Kachin State. Local hunters described a type of monkey that was easiest to find and track during rainstorms, when the animals sneeze due to the shape of their noses. Originally estimated to number less than 400, the newly found population in Yunnan today brings the known number to around 900.

The discovery has encouraged wildlife conservation experts becuase the forests of Kachin State — where the vast majority of R. skrykeri live — are increasingly threatened by a combination of civil war, illegal logging and mineral extraction. For Yunnan, it is another encouraging bit of news as the province continues to make slow but steady progress protecting its indigenous species.