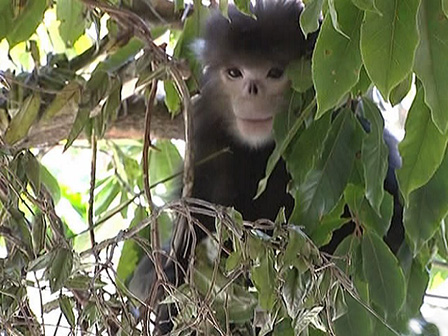 A juvenile monkey found alone and freezing near a nature reserve in northwest Yunnan has slowly been nursed back to health by conservation officials. Referred to as the Nu River golden monkey (怒江金丝猴) in Chinese, the species is one of the most endangered primates in the world and this is the first instance of one ever being kept alive in captivity.

The monkey was found in September in Lushui County (泸水县), roughly 150 kilometers northwest of Dali. A Lisu woman who was collecting herbs in the mountains came across the animal and, after realizing it was alone and hungry, decided to take it home. She then contacted local Wildlife Conservation Management Committee officials who then delivered the primate to researchers at the Nu River Nature Reserve (NRNR).

For the past two months the monkey has been under the care of NRNR workers, who initially struggled to find a proper diet for the animal. Apples and bananas were originally offered and subsequently refused by the monkey. Handlers eventually began offering a steady supply of different wild plants collected from the Gaoligong Mountains (高黎贡山). The number of plant species so far eaten by the juvenile have risen to 15.

The juvenile, which is estimated to be between two and three years old, is now reported to be in relatively good health, although zoologists are still concerned about its weight and growth. To make the animal more comfortable, the NRNR has constructed a 180-square meter enclosure and filled it with indigenous plant species. Researchers have not announced plans to release the primate and are reportedly concerned it will be extremely difficult to locate a troop of monkeys to adopt the juvenile.

Nu golden monkeys were unknown to science until they were first identified three years ago in Myanmar. Given the Latin name Rhinopithecus strykeri, the animals are referred to outside of China as Myanmar Snub-nosed Monkeys. According to conservation group International Rivers:

Populations were first identified in Yunnan in 2012 using DNA samples. Their existence in China was later confirmed when forestry workers in the Gaoligong Mountains were able to take photos of a group numbering between 60 and 80 animals later the same year. The Yunnan government, increasingly aided by both domestic and foreign conservation groups, has made sporadic progress with regards to wildlife preservation over the past decade.

Efforts such as these have resulted in some animals, such as the black snub-nosed monkey (滇金丝猴), rebounding from near extinction. Stronger ecological protection efforts, a more educated public and strict anti-poaching initiatives have been credited for advancements in Yunnan wildlife conservation.

Great article. Kudos to the lady who found the monkey and took the steps to help him.