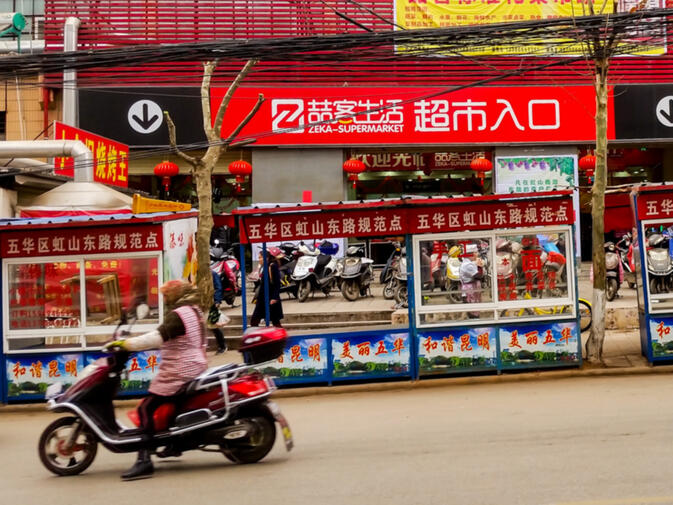 Like many foreigners in town, I live on Hongshan (虹山), a hill near Kunming's old university district flanked by Dianmian Dadao (滇缅大道) to the west and Jianshe Lu (建设路) to the east. The area has not been immune to the rampant destruction and construction enveloping vast swathes of Kunming, and for years residents have been subject to a constantly transforming urban landscape. A new and abrupt change occurred on the morning of March 1, when urban management officials began dismantling 200 roadside kiosks where people, including myself, have bought groceries for more than two years.

The small blue stalls — called Wuhua District Hongshan Dong Lu Standardized Booths (五华区虹山东路规范点) — now being torn down and thrown away were originally installed on Hongshan Dong Lu in 2014. They were licensed for use to vendors through urban management officials, or chengguan (城管). For a fee of 20 yuan per day, fruit and vegetable sellers, butchers, snack purveyors, clothing merchants and many others could rent the curbside stalls. Business was typically brisk from dawn to dusk, as the Hongshan area is home to about 20,000 people.

In my personal experience shopping on the street, the conglomeration of vendors sold an enormous variety of seasonal fresh foods and homemade staples. Some 'shopkeepers' adapted quickly to the variety of different requests made by foreigners living in the area. Ask for avocados, raspberries or mala peanuts (麻辣花生) one day, and chances were by the end of the week they would be available.

But the outdoor market's success ended up being its eventual undoing. An increasing number of pedestrians, coupled with the coming and going of innumerable delivery vans, brought vehicular traffic to a standstill for hours every morning and evening, rendering navigation of the street a nuisance and hazard. 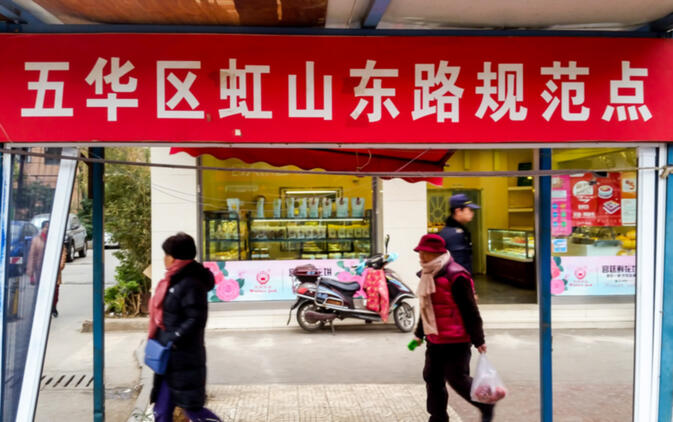 City officials decided to close the outdoor bazaar down two weeks ago, and gave vendors notice then. People renting the kiosks were also given options — move to the Zeka Supermarket (喆客生活超市) in a converted factory on Hongshan Dong Lu, or to the covered Yonghexing Wet Market (永合兴农贸市场) 500 meters away on Hongshan Nan Lu. Renting a space in either location will cost between 260 to 400 yuan (US$38-58) per month, prices roughly comparable to renting the old street-side booths.

I spoke with two vendors who are moving their shops to the Zeka Supermarket later this month. They are among the estimated 80 percent of street-side merchants who have signed contracts to move to other markets. Both seemed unbothered by their evictions. A woman whom I've bought vegetables from on a daily basis for more than a year said of the move, "At least now when it rains or snows, I'll be inside."

The decision to shutter vendors stalls stems from daily traffic jams along the road, and officials feared without removing the booths, things could get even worse in the near future. Hongshan Dong Lu connects the major thoroughfares of Dianmian Dadao and Xuefu Lu, the latter of which will convert to a two-way street later this year. Traffic through the Hongshan area is expected to increase significantly because of this change, while new high-rise apartment blocks being built nearby will undoubtedly stress parking arrangements and traffic conditions significantly.

The move to clear kiosks off the road is scheduled to be completed by March 15. The plan seems to be a fairly reasonable one, especially considering vendors were given options. But I will miss shopping on the street at what was one of Kunming's more colorful, vibrant and interesting markets. 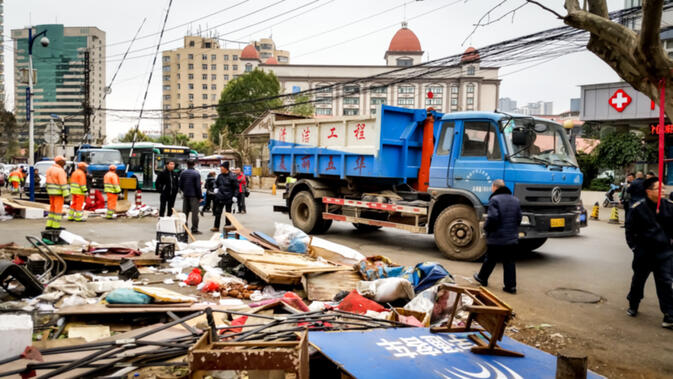 This is the more bold face of gentrification. Looking at the pattern in other cities, the next step, in a year or so, will be to close the wet market as well. A sad but inevitable part of progress.

Seems to me the problem with street markets is not that they exist, but that there seems to be a lack of control over how large they grow. Licensing of marketers should be able to control this, if there is a will to do so.

I am surprised that the article does not include the back-story for this market. I will give my own account from memory.

Until about 2007 or so, there was a very large covered market next to the railway tracks at the bottom of Hongshan Dong Lu in the corner of what is now the Banzhucuiyuan development, stretching back to approximately the modern location of McDonalds. It was also in what appeared to be a (roughly) converted factory.

When that market was closed down to make way for the Banzhucuiyuan development (stretching all the way across to Jianshe Lu), the vendors emerged along both sides of the Hongshan Dong Lu hill, and over the last few years the market grew up to its significant size.

At about the same time that the old market by the railway was shuttered (~2007ish, give or take a couple of years) a similarly locally significant market in Sujiatang (beneath the north-eastern end of Hongshan) was also shuttered. That market was (almost) on the corner of Jianshe Lu and Xuefu Lu.

With no real markets available, locals are being force to travel longer distances for their fruits and vegetables. This is compounded by the fact that Hongshan is ringed by one way streets - Dianmian Dadao and Xuefu Lu - and is probably a significant burden on older people who cannot easily carry large amounts of food.

The market at the top of Xuefu Lu has probably been one beneficiary, and was itself renovated and greatly improved last year (2016).

As a result of this market's removal, I would not be surprised to see the Hongshan Nan Lu market renovated this year as it's not really up to standards as far as cleanliness and drainage go.

There is some speculation that the removal of the Hongshan Dong Lu market is to prepare the road to be a larger thoroughfare from Xuefu Lu which is alleged to be under the process of being converted to a two way street (as well as having a metro line installed beneath it). Who knows how many years until this is all complete?

MY STREET IS RUINED.

Everything for the cars, nothing for ordinary people.

"A sad but inevitable part of progress."

There's no such thing as progress, only change. Nothing is inevitable save death, either.

Outdoor markets obviously meet needs or they would not exist. Walmart/Carre Four are not likely to eliminate them soon, save by force.

Thanks for the report, Patrick.
The street market that's disappearing was just a blip on the timeline. I think given the narrowness of Hongshan Dong Lu the street market was unsustainable. I still miss the old wet market that was located at the bottom of the hill, next to the train tracks in that big old brick building, which is now 版筑翠园。Relocation to Zeka Supermarket sounds like a good option. Do you know the exact location?

@Matt according to Gaode the address is 112 Hongshan Dong Lu. West side of street about 70m downhill from the Hongshan Nan Lu intersection.

In the article, Zeka has a hyperlink to the listings:

As someone who regularly uses that road by car, e-bike and foot (though not to shop). I'm pleased the sheds going. They made the road an awful and dangerous place to traverse.

it will also make it easier for the water trucks to get up to the hill when the pressure is low ;-)