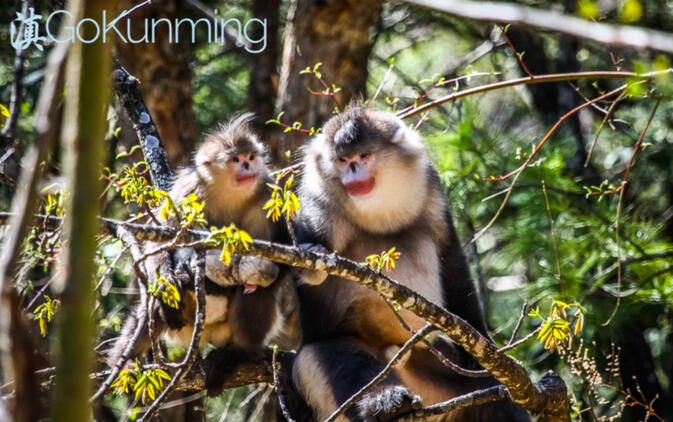 A female monkey clutched her little white baby to her chest with one arm while the other stroked the infant's back. The baby stretched out his white hand and grabbed a handful of his mother's fur. The monkeys' faces were startlingly human-like with their dark eyes, small upturned noses, and smiling red lips. Suddenly the leaves quivered and the tree shook as a huge black and white male clambered up the tree to join the mother and child on their branch. The little family nestled together and bent their heads, falling asleep in the late morning sun.

This scene unfolded while we were volunteers for The Nature Conservancy (TNC), an environmental non-government organization based in the United States. After over a month of working in the office on projects designed to help conserve the Yunnan snub-nosed monkey — also called the Yunnan golden monkey — we were excited to finally have the opportunity to see them with our own eyes. 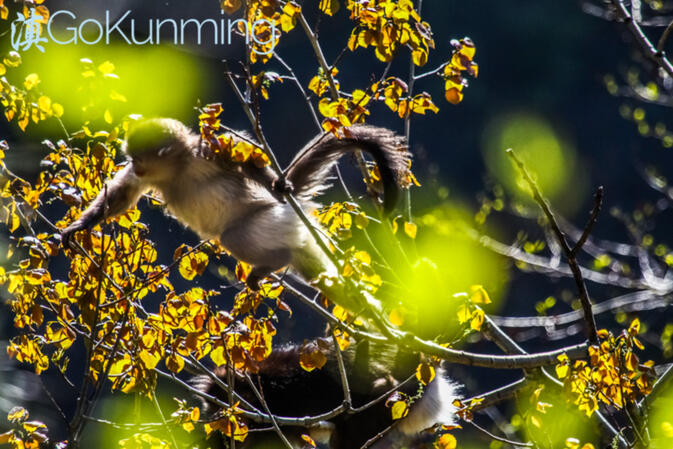 The monkeys of Baima Snow Mountain

Yunnan snub-nosed monkeys are highly endangered, shy, and very difficult to see in the wild. Our best bet to catch a glimpse was in the Baima Snow Mountain Nature Reserve, where a small population of monkeys are fed and monitored for both scientific and tourism purposes. Located in Weixi County, Diqing Tibetan Autonomous Prefecture, the nature reserve covers over 180,000 hectares of steeply forested slopes and snow-capped peaks.

When Baima Snow Mountain Nature Reserve was first created in 1983, Yunnan golden monkeys were on the brink of extinction. After decades of land conservation, wildlife research, and intensive community education and development, the monkeys have made an impressive comeback. There are now over 1,500 monkeys living in the Baima Snow Mountain region, and a total of 2,700 monkeys thought to be spread across northwest Yunnan and parts of Tibet.

We arrived in the small village of Xiangguqing (响古箐), where we checked into a guesthouse at the Lisu Culture Experience Center. The center has hosted TNC countless times throughout the years, helping to launch the monkey protection project that has saved the species from extinction. Set into a steep side of the mountain, the center's multiple buildings utilize traditional Lisu architecture while featuring enough modern amenities that the average eco-tourist can stay in comfort. 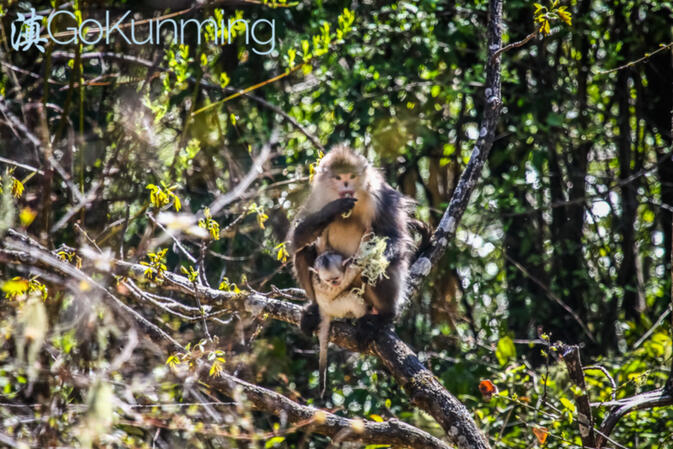 We spent the evening sipping tea and chatting with Mr Zhong, who heads all of Baima Snow Mountain's monkey protection and community development programs. Mr Zhong explained that the nearby monkey group contains six family units and numbers approximately 50 individuals. Local staff feed the monkeys twice a day, a practice that started many years ago when a particularly harsh winter forced the starving monkeys closer to the village.

Today, these monkeys have lost their fear of people and happily accept offerings of dried apple slices, eggs, and Chinese Usnea (松萝) — a pale green, fluffy lichen that is the monkeys' preferred food in the wild. The local staff tries to control the population to prevent crowding, occasionally using food to lure a few monkeys away to join other groups living deeper in the forest.

Many of the local people from Xiangguqing Village who once made a meager living logging and poaching now earn salaries from protecting the monkeys. Some work at the guesthouse or at a nearby wildlife rescue station. Others are members of the local patrol team, which traverses the entire nature reserve to monitor the monkeys while simultaneously discouraging illegal human activity. Mr Zhong stressed to us over and over the devotion of the locals to their newfound jobs. He described how Mr Yu, the leader of the patrol team, was distraught with worry when a child accidentally started a fire in the forest near a group of monkeys. Although the fire was put out and no monkeys were harmed, Mr Yu literally pulled his hair out in anguish. 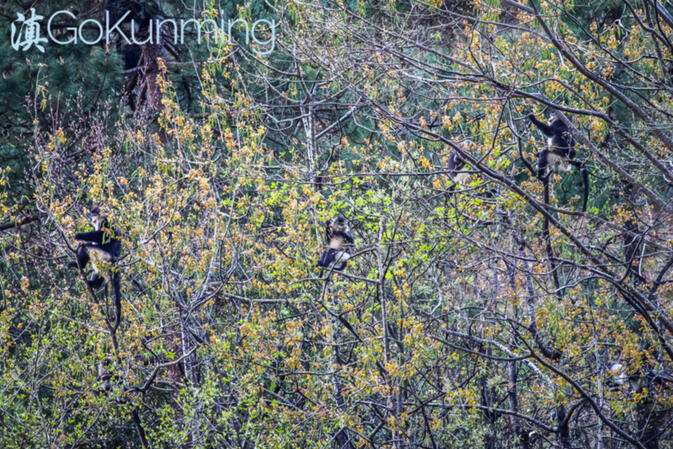 The morning following our arrival, we woke up early and followed Mr Zhong across the road and up the mountain from the monkey feeding station. A string of red banners prevented tourists from getting too close to the monkeys' favorite grove, but we still had a clear view. They were very active. Adults and juveniles alike were jumping and swinging in the highest branches of the trees.

Despite having seen many photographs of the monkeys, we still had no idea what they really looked like. We thought they'd be golden in color due to their name. In fact, the infants are white, young monkeys and adult females are gray or slightly brown — which we had mistaken for gold in photographs — and adult males are black with white bellies, faces, and hindquarters. From a distance, the males — who can grow to over twice the size of females — look much more like giant pandas than monkeys. We also had no idea the wide variety of sounds the monkeys make — sometimes squeaks, whines, or cries that almost resemble those made by house cats.

A local man ducked under the red banners lugging an enormous sack of Chinese Usnea. It was feeding time. Accustomed to the routine, the monkeys clambered down from the trees and followed the man on all fours, stopping to collect the stringy lichen that he dropped on the ground or strung across the lower branches of nearby trees. In their natural state, Yunnan golden monkeys spend approximately 20 percent of their time on the ground foraging for food. They sleep high up in the trees, clustered together along the same branch to conserve heat. 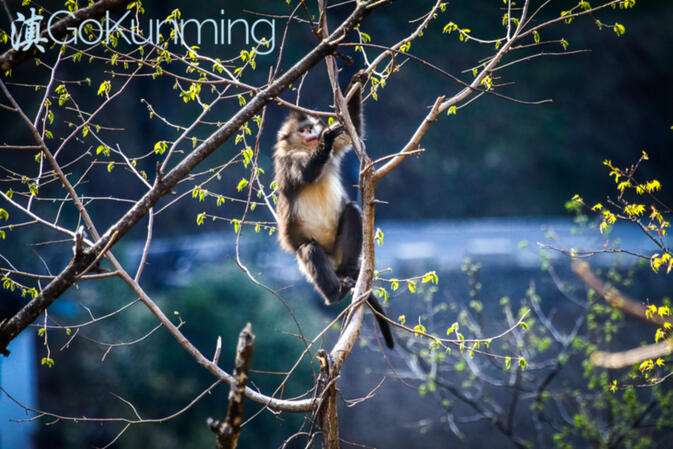 As beautiful and rare as they are, the Xiangguqing monkeys are not truly wild. At one point, we had to step away from the red banners and clear a path to make way for a farmer and his herd of cows. One cow wandered under a fence, mooing loudly. The monkeys on the ground scampered away in a flash, but the ones sitting high in the trees simply stared, unflinching. We never thought we'd see a cow and a Yunnan snub-nosed monkey in such close proximity.

Although the monkeys appeared healthy and happy to our untrained eyes, there is concern among wildlife experts that their situation is far from ideal. For one thing, the monkey's semi-domestication means that they've all but lost their scientific value. Their social structures, communication, and feeding patterns have been so influenced by human contact that researching them is of little use.

In addition, and perhaps more importantly, some experts worry that the monkeys suffer from poor nutrition compared to their truly wild relatives. Although their feedings are based as closely as possible upon habits observed in the wild, the food that staff feed the monkeys has nonetheless been chosen by people, and thus lacks the variety that monkeys would forage for themselves. 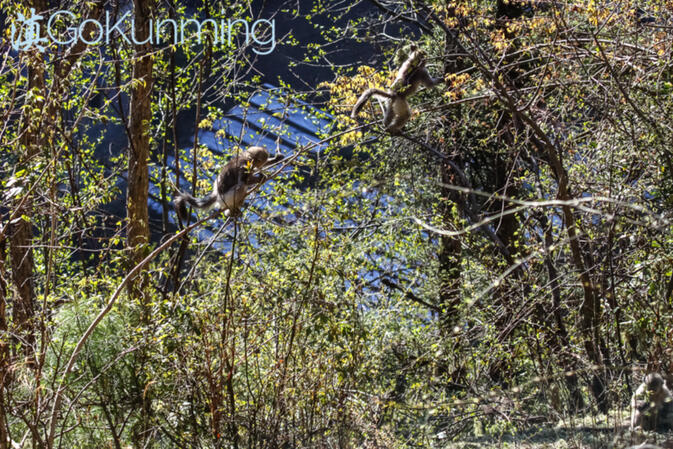 Is it possible to develop a rural community and encourage wildlife tourism, while at the same time truly conserving the wildlife in question? In many cases around the world, sadly, the answer seems to be no. An influx of tourists and researchers bring crucial income to impoverished communities, but the resulting development almost by definition affects the natural environment.

The key, we at TNC think, is to educate tourists and developers to minimize their impact on wildlife as much as possible. To this end, Baima Snow Mountain National Nature Reserve seems to strike a good balance. Because tourism and development are centered on one group of monkeys, this means that the others living in the wild can survive deep in the forest with little human contact. To casual observers like us, this seems like a reasonable compromise between the normally conflicting goals of conservation and development.

The Nature Conservancy stopped working in Baima Snow Mountain in 2013, when the monkey population stabilized. The area and surrounding facilities are now completely locally run. Currently, TNC is focusing its energy on community development projects in Laojun Mountain National Park in Yulong County, where a small number of Yunnan snub-nosed monkeys are threatened by habitat loss from illegal logging. Hopefully, in a few years, conservation and development in Laojun Mountain will improve to the point that it too can support sustainable wildlife tourism. Until such a time, the monkeys of Baima Snow Mountain provide a fascinating glimpse into the lives of one of China's most endangered primates. Two minibuses run between Lijiang and Weixi (维西) daily and cost 70 yuan. They depart from Lijiang Bus Station on Kangzhong Lu (康仲路) at 7:50 and 9:30am and the trip takes rougly six hours. From Weixi, you will need to arrange your own transportation to Xiangguqing. This can be done by paying for a seat on another minibus for around 10 yuan per person.

We would also recommend booking a tour with an ecologically responsible tourism company to ensure that you are helping the local community and not causing unnecessary disturbance to the monkeys and their habitat. Xintuo Ecotourism Company, based in Lijiang, was founded with help from TNC, and can arrange English-speaking tours.

Great article. Will definitely be heading out there sometime soon. Do you know if there are any volunteering opportunities out there working with the monkeys? This is something very dear to my heart and I would be very honoured to be able to help hands on.

I don't know about hands-on working with animals, but you might try getting in touch with The Nature Conservancy in Lijiang.They sometimes need volunteers working on projects related to the monkeys. You can send me a private message for more information!

Did the author talk to Lisu People in Xiangguqing, or just accepted inputs of TNC or National Park? How much ticket fee goes to community? How much loss of locals as a result of aforestation in the name of protecting the habits of monkeys？I bet most locals would say"Except loss, We got nothing from the monkey park"