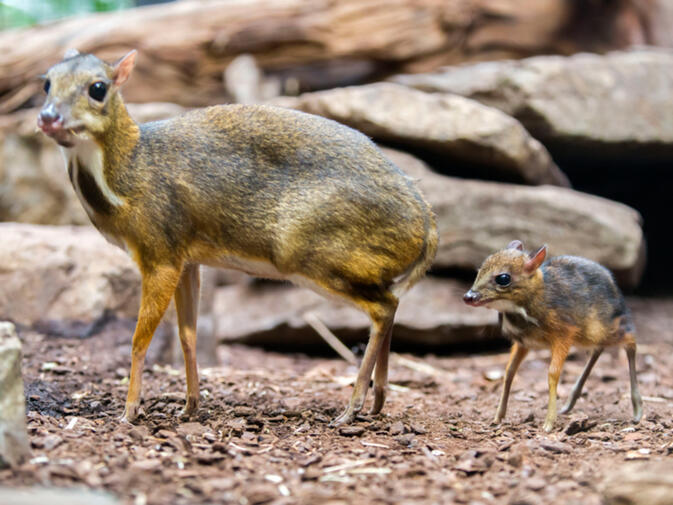 Zoologists working in the Xishuangbanna National Nature Reserve are in the process of conducting a months-long study to more accurately determine animal populations living along the Yunnan-Laos border. Their findings so far — especially concerning rare and endangered animals — have been encouraging, according to research scientists involved with the project.

The most notable discoveries made during the survey — first begun in mid-2015 and continuing today — have concerned several mammal species, including species of bears, deer, and wild cats. The animals were sometimes observed in person, but more often captured on film by motion-sensor cameras equipped with night vision capabilities.

Researchers have focused on Mengla County (勐腊县) in southern Xishuangbanna, which contains part of a cross-border nature reserve jointly managed with Laos. The surrounding region faces a litany of threats to its biodiversity, with the largest dangers posed by deforestation and the spread of rubber, fruit and tea monoculture plantations.

However, the Xishuangbanna National Nature Reserve (XNNR) encompasses 3,000 square kilometers of land, 500 of which are classified by the Chinese government as virgin forest. It is in this pocket of undisturbed wilderness where scientists found black bears, palm civets and Asian golden cats. The presence of these three species, all of which are carnivorous, is a good sign, according to XNNR director Yang Hongpei (杨鸿培). He explained to reporters that large carnivores indicate:

...biodiversity in the region is still fairly-well preserved, with a more complete ecosystem and food chain [than previously thought]. This indicates that the region has a high scientific and conservation value, and also shows that the tropical rainforest in Xishuangbanna contains many scientific discoveries yet to be made.

While the presence of predators is an encouraging sign, other finds made during the survey may point to the effects of climate change. The sightings of mouse deer in southern Yunnan were all made above elevations of 1,000 meters, marking a first in the world. The diminutive ungulate — called shulu (鼠鹿) in Chinese — typically grows no larger than eight kilograms. Populations of the solitary animals exist across South and Southeast Asia, but have never been observed living at an elevation higher than 600 meters.

Xishuangbanna National Nature Reserve scientists have yet to determine why Yunnan's mouse deer have moved to higher ground, or for that matter, what population sizes for any of the 23 endangered animals observed in the survey may be. Director Yang said the findings should be a call to action, stressing the need for urgent investigation and "emergency protective action".

yes i am sure some restrant owners are getting very excited

Sounds good, but Dazzer's reference to 'some restaurant owners' is also relevant.

Way back in April 2002, 14 years ago, I recall seeing a deer wandering on to the road ahead of me while cycling from Simao (now renamed Pu'er, the original Pu'er now renamed Ning'er) to Jinghong along the old highway. I stopped and watched it for awhile, before it bounded up the embankment and back in to the forest. Those days are gone.

any one else noticed the sudden abundance of mouse-looking ground squirrels in the south of the city?

We've got a lot of those. We call them rats where I come from.

Is it true? Yes, I think so. We at CERS have been doing wildlife surveys in Luang Namtha Nam Ha National Protected Area on the Lao side of the same border since 2014, also using camera traps. We have found many of the same species mentioned (and also Gaur and Clouded Leopard). So there is much left to be protected.
However, the densities are very low and the distribution is very patchy. The problem is pretty obvious – hunting. While subsistence hunting of squirrels, wild pig and munjac is legal in Lao PDR outside of Protected Area Core Zones, market sale of wildlife is totally illegal. But we see wildlife of all kinds for sale in the market every day, including totally protected species. And now we have a new probem. With the boom in Chinese investment in northern Lao and the new border traffic comes even more demand for wildlife as food and medicine.
Please, don't buy wildlife.

Bill: have heard of a place, about an hour north of Hueisai I think - gambling operation, attracts many Chinese and has all sorts of wildlife in cages that you can eat - true?

Interesting Bill. Another anecdote since you're working in the area. About 2006 I caught a succession of buses down from the back of Yuanyang to eastern Xishuangbanna. Where the road runs very close to Laos, a local villager got on who was also heading toward Jinghong. We had a chat, and I asked her whether they eat any animals from the forest. She said "yes, they are way tastier than animals reared in the villages!" All the while we were passing no hunting signs...

When you visit markets around Luang Namtha and Oudom Xay, some locals quickly put banana leaves on some animals, and also dont allow photographs to be taken.

The situation is of course more complex than on the surface, since Lahu, Khmu, Akha and Hmong have been hunting for ages. You could say its part of their culture. And Lahu are notorious for hunting. Theres a great book on this by Gordon Young, "Journey from Banna: My Life, Times, and Adventures". Gives insight into Lahu hunting culture. Any laowai staying in Xishuangbanna should have read it (which they, of course, havent.)

Laos is a place today where you must be politically correct in your opinions, and Aliens question may have crossed the line.

Another good book, which really brings out the character of Lahu hunters, is Gordon Young' "Tracks of an Intruder". Young is an American son of missionaries who grew up among Lahu, & Lahu is his first language.

Very interesting topics. The survey seems didn't get any data about tigers, correct?

Thanks for sharing the book information. like to get one.