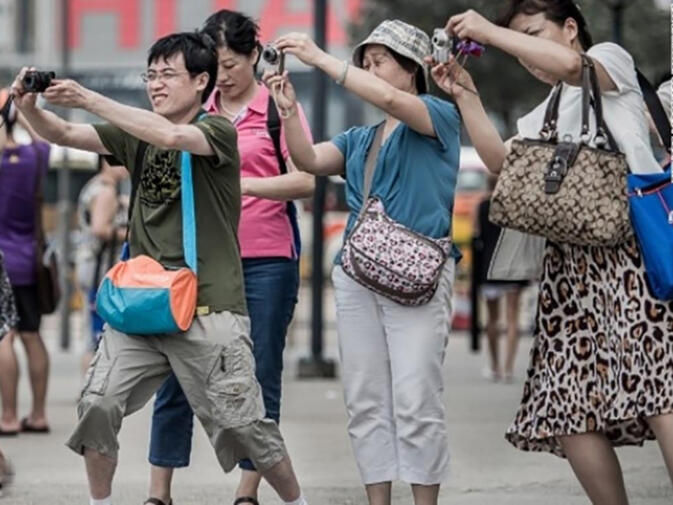 Disrupting order on buses, trams, trains, ships, aircraft or other public transportation; the destruction of public bathrooms or other facilities; violating social customs or habits at sightseeing destinations; damaging or destroying items of cultural heritage; participating in gambling or pornography [prostitution]; and other circumstances that seriously disrupt orderly travel.

The NTB will compile dossiers on people who violate the new regulations or otherwise exhibit "poor moral quality and habits" while on vacation. Records will be kept for a period of two years, although what punishment serial violators may expect to face has not been made public. However, when necessary, individual 'uncivilized behavior' files will be shared with law enforcement, transportation and immigration officials.

Establishment of the list came hard on the heels of internationally published accounts of Chinese tourists exhibiting questionable behavior while traveling during Tomb Sweeping Festival. The most sensational of these were reports that three Chinese men were arrested while on vacation in Japan for taking "up-skirt" photos of women on the subway.

It is not currently clear if the national database of bad behavior covers actions inside China or is only international in scope. If it does include domestic actions, it may grow long indeed. In just the past two years, Yunnan province alone has witnessed a slew of bizarre and unscrupulous outbursts — many of them centered on Kunming Changshui International Airport.

These include a Kunming Airlines passenger jokingly telling stewardesses he had a bomb, 30 angry travelers storming a runway and, most infamously, a Yunnan official caught on camera demolishing a check-in kiosk after he and his family arrived late a second time for their flight.

How the database is used and how effective it proves to be will go a long way in addressing a problem experienced by other countries ranging from the United States to Russia. Even Xi Jinping has expressed frustration. In a public admonition made recently to tourists, China's president was quoted as saying "Don't throw water bottles everywhere, don't destroy people's coral reefs. Eat fewer instant noodles and more local seafood."

Some of this behaviour is due to a lack of 'mindfulness'. If people had to leave a security deposit at the Entrance/Exit Bureau, that they would lose if they are reported for bad behaviour, then they would be more mindful.

I'm glad that this is being discussed. Awareness is a good start. But they have to start doing this at home and ENFORCING it.

It's going to be a REALLY big data base.

Ha.Ha. No doubt about it!

Would be interesting if the Dai, Naxi, Uyghurs, Tibetans and other minority peoples in China kept such records.

On those who visit them, I mean.

Why would they? They don't find many of the behaviors unruly. In fact many engage in them.

You been to Lijiang? Lots of Han tourists.

Who hasn't been to Lijiang. Lots of Han shops, cafes, bars, and hotels too.

I'm not clear in my head, one way or the other, about what I think about the Chinese state deciding on a new way to monitor people.

Bottom line is that there is no constant enforcement. They'll do it for a month and then tired out. All the campaigns like 'no smoking', 'don't drink and drive', ' don't spit' fizzle out. They need to keep it going and enforce what's already there.

shanghai are pretty rigourous enforcers could be why it was one fo the first cities to civilize. as for big databases, rekon the are experts in those. rekon were are all on a few of them

What does 'one of the first cities to civilize' mean?

@Alien
You know exactly what Dazzer meant you are just trolling for a verbal fight. Civilize in the context of thread topic.

Stop being a pedant. You know.

Figured it out. Enforcement of laws against such public anti-social behaviour in China is a good idea, as Liumingke says. But I'm still not sure what I think about state monitoring of citizens traveling abroad.
Comments?

I say monitor the hell out of them, then ban them from travelling if they do anything wrong, and fire them if they work in the public sector. As for bad behaviour in China, it would be so easy (there are already loads of security guards, police, chenguan) they just have to start doing their jobs

this blind begger is an unruly tourist, we bette beat the crap outa him

This is one issue that I think the Central Government is totally correct about. Bad tourist behavior gives the Chinese people a really, really bad image around the world. I've seen thing for years. On my last return trip from China, I saw this kid on the plane who learned how to unlock the restrooms from the outside. Several times, he did this while people were in there. He ignored flight attendants and his parents didn't seem to have control of him. This is so typical of the type of disregard for rules that a lot of travelers have.

I think the first thing that the government should address is air safety. They should impose fines for people who unlock their seat belts before they get to the gate. I've often wondered what an emergency evacuation of the plane would be like with a plane load of people who don't regard instructions.

@Haali: Should same be done for British tourists raising hell in Amsterdam every weekend and chasing prostitutes in Bangkok - i.e., monitor them by their home government, have Dutch (or Thai) authorities prosecute them if they do anything illegal and then have home government ban them from travel (e.g, take their passports away) and then fire them from the public sector when they get home?
If every nation's governments monitored their nationals abroad, their would be even more monitoring of people all over the world, plus restrictions on right to travel, etc.
Alternative: leave the Thai and Dutch governments to enforce their own laws in the territories they control.

it's like minority report. trying to prevent crime before it happens.

what about employers behaving badly towards their work force, which is 1000 times worse than anything tourists do on vacation. is that going to be addressed at some point?

@Magnifico I think it was addressed by Vietnamese workers awhile back.

@Alien. It's a Chinese proposal. It's the Chinese government that is embarrassed by it's citizen. You're a hypocrite. When it suits your ideals, you harangue others, when not, you defend China pulling the culture card. China enjoys being a police state and enjoy living in it.

is someone who loses their temper at changshui airport a 'tourist'? and does acting out of anger after arguably being provoked by incompetence fall into the same category as rape?

and....what do instant noodles have to do with acting civilized?

so many questions. and more holes than swiss cheese.

@Alex: I didn't intend to pull any culture cards and don't think I did - but if you want to claim that Chinese people want to be monitored etc. then I think you're pulling a culture card (i.e., this is what Chinese people want and we shouldn't interfere).
I'm not attacking you & don't want to go on about this, but I think that's, in effect, what you have done in your last post.

@Alien. You seem to speak on behalf of the Chinese people? Do you see mass protests against this law? You, with your western ideals dislike this law. Don't presume you know what the Chinese people want. I should of not even bothered with a reply. Anyone who doesn't consider China a police state is mentally defecient.

my chinese uncle wants rice his son wants noodles. so what do chinese want, rice or noodles

I think that there is nothing wrong with eating noodles in those bucket containers but have you seen how they eat those things and then dispose of them? They make these loud slurping sounds and many of them don't dispose of them properly.

Disposal and slurping are both Chinese culture - I think poor disposal is something to be corrected, as it causes collective problems; slurping does not, within China, except for many of the relatively few foreigners; internationally it may be a pain to see it in many foreign countries, but you can't learn everything about every foreign culture all at once - I've been in China awhile and, hopefully, am still learning. Learning about foreign customs is something that people might be taught, however. In case anybody's interested, I generally don't slurp, and my non-slurping doesn't seem to offend anyone here.

@Alien
Inside of many Asian countries like Japan, China, South Korean slurping is accepted and encourage as a sign of how delicious the dish is. However, outside of these countries is another story. Same thing with language. For example in Mexico the spanish word 'bicho' is a type of bug but if you you that same word in America it can mean 'dick' which is an offense word to most. So my point and I think the point of this hold thing is that you have to take time out to learn and observe customs from other places you are visiting.

maybe chinese people wouldnt think they have a right not to be monitored. may not like it but is happy to see others monitored for the general good

Yay! Amazingly, a Beijing policy that actually has teeth AND is enforceable. Wow...Fantastic! Great! Amazing!