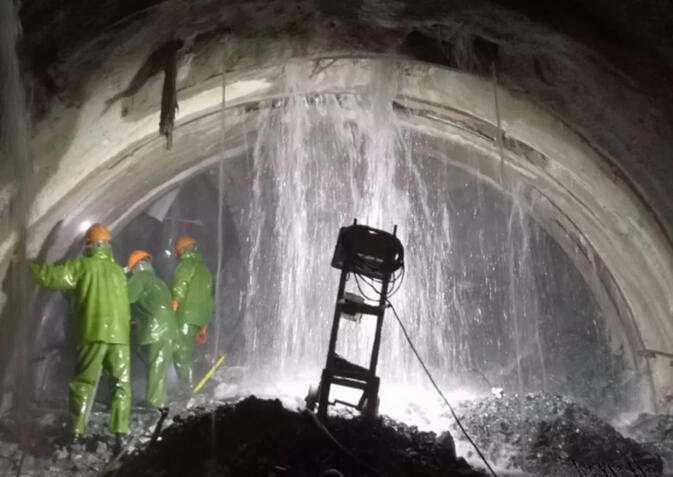 Two years ago, we covered the story of a group of engineers and construction workers involved in a nearly impossible endeavor. Their attempts to carve a single railway tunnel through one small mountain in Yunnan had, according to the project foreman, "tortured me for nine years". By finally solving longstanding ventilation and drainage challenges, the tunnel now has a clear completion date, something it has lacked for more than a decade.

The Dazhushan Tunnel system lies beneath a stretch of the Hengduan Mountain Range about 20 kilometers north of the city of Baoshan (保山). Workers there have been toiling to finish a 14.5-kilometer series of passageways through bedrock since the opening ceremonies of the 2008 Beijing Olympics. A combination of impenetrable geological formations, underground rivers and minor fault lines all conspired against much progress.

The most challenging of these obstacles were a constant inundation of water coupled with extreme temperatures. The construction crew labored in ambient temperatures regularly above 40 degrees centigrade and suffered through constant relative humidity of 85 percent for three years, according to official news accounts.

The "breakthrough" announced June 26, involves the installation of proper and permanent ventilation, alongside a complex water drainage system able to deal with up to 78,000 cubic meters of water per day. Additionally, "micro-faults" in the surrounding rock have been sealed with chemicals. With such improvements, the construction crew will no longer have to don raincoats underground or require five tons of ice each day to help keep them cool.

The Chinese press has dubbed this stretch of tunnel "the world's most difficult", and for those who have spent the past 11 years building it, the moniker is apt. Official estimates now say the dedicated men and women struggling to finish the underground passageway will finally be done as of late 2020. But this Herculean task is only one part of a much larger undertaking — the Dali-Ruili Railway (大瑞高铁).

Once finished, the line will connect central Yunnan to the border with Myanmar, and maybe one day to railway systems in Bangladesh and India. Following the June 26 announcement of tamed water, officials are hopeful the Dali-Baoshan portion of the railway we be in service by December 2020, and that the entire railway from Dali (大理) to Ruili (瑞丽) will go into operation before the end of 2022. Patience is a virtue.

Perhaps foreigners will be travel to Myanmar by land. That would be an improvement

Here's the thing: in Burma the route will go through territory under the control of the northern Shan state army, whose relationship with the Myanmar government is dodgy, thanks to the complete nastiness of the Tatmadaw (the 'Myanmar' military, who run the government of the country, despite what you may believe about Aung San Su Chi, who has pretty much proved herself as not being the savior of the people).

@Ishmael Are there actually plans for it to continue into Myanmar at this point?
I thought those plans had been abandoned, at least for now...

So where's it going then?

I miss the old road to Jinghong, when it took 22hrs on a bumpy ride. Peolle drinking baijiu on the sleeping bus, sunflower seeds piling the bus floor, and smell of dirty socks in every corner. People chatting, gossiping, making friends, and a laowai who speaks sone chinese was a big deal on the bus. Then the military stops came, bus was searched, ppl interrogated, and you could cut the tension with a knife. Then lunch and all was relieved and laughter again. All in all, there was something intimately human about it. A feeling of the destiny of being a human.

I know what you mean Peter. Unfortunately the world is getting blander.

Geogramatt, eventually it may cross into Myanmar. However, given how it will only be finished as far as Ruili in 2022, there's still many years before it ever makes it into Myanmar. Hopefully that will be enough time for Myanmar to end it's wars in the northern part of the country but that's wishful thinking at this point. After all, the Kachin Independence Army or KIA broke a 17-year ceasefire back around 2011 and fighting has actually increased in the meantime.

'Myanmar' shouldn't be thought of as a single agency that can end or not-end anything.