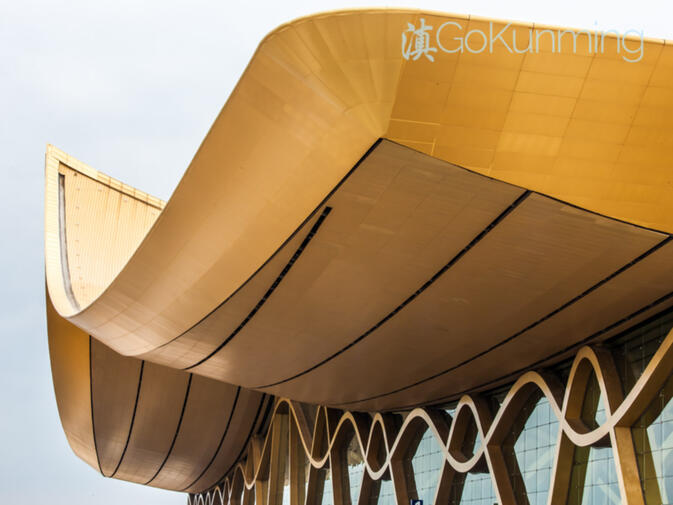 One of the biggest and busiest airports in China is set to grow much larger. Kunming Changshui International has only been open for six years, but it recently received national approval — and presumably state funding — to increase its ability to handle passengers by nearly 300 percent over the next decade.

Today, Changshui is the country's sixth busiest airport based on a matrix involving passengers, aircraft 'movements' and cargo handled. In 2017, the facility handled 44,727,691 passengers, trailing only Beijing, Shanghai, Guangzhou, Chengdu and Shenzhen, according to statistics compiled by the Civil Aviation Administration.

The newly approved 2018 Changshui Airport Master Plan eyes a day in the not-so-distant future when the facility will see passenger traffic exceed 120 million people each year. In order to meet such demand, Yunnan province's main travel hub will add additional 4,000-meter runways to augment the two that already exist.

A previous expansion plan first outlined in 2015 — a mere three years after Changshui first opened — called for the construction of a second major terminal and two extra runways. Already underway, that scheme has since been updated and was given the green light by Beijing in mid-October of this year. No verifiable cost estimates for the expansion have yet been made public.

Under the 2018 Master Plan, Changshui's future runway count has risen to five and two 'satellite facilities' are scheduled for construction to supplement terminals 1 and 2. Work on Terminal 2 broke ground in 2015, and is expected to be completed sometime around 2020, as is at least one of the auxiliary runways. All construction detailed in the 2018 Master Plan will reportedly be finished by 2030.

Changshui was opened in 2012 at a cost of 23 billion yuan (US$3.3 billion) as a replacement for Kunming's outdated and inadequate Wujiaba Airport. At that time, the facility was included in the 'Go West' development program (西部大开发), an enormous domestic economic policy designed to boost development in western China. Today, that strategy has been subsumed by the country's Belt and Road Initiative.

It has long been rumored that Kunming would land contracts for an ever-growing number of intercontinental flights. And while connectivity between Yunnan and the countries of South and Southeast Asia have jumped significantly since 2012, consistent direct links to Europe and North America have not been so quick to materialize. With the addition of even more airstrips built to handle the world's largest passenger planes, Changshui may finally be on its way.

I hope this means direct flights to Europe (well, UK!).

Anyway, note the ecological damage of airports in general, and also of the whole Go West campaign over the years - 'development' can be fine, but it's a term with an irresponsibly vague definition.

Lot of competition from Bangkok airports.

@ocean I've been dying for the day I hear of a direct flight to London lol. How much time and stress will that knock off the odd trip to see friends and families...

Oh they do have direct to Paris already. Not quite London but close with the channel tunnel.

Someday the whole world will consist of cities attached to airports through which people wearing breathing devices will be shuttled on work/leisure schedules designed according to computerized efficiency programs created by bureaucrats paid competitively according to numbers of people moved on schedule.

I wonder how that someone got to Chinainthe first place, certainly wasn't by walking or bicycling. nor by ship. And unless there is a secret trans-Atlantic or trans-Pacific railroad, not by train either.

And what kind of renewable, non-environment harming energy he is using to fire up all those electronic gadgets he uses to go online.

Ya know, my pa had a sayin, don't shit where you eat and most certainly don't complain about The smoke if you want a BBQ rib.

How many ribs you need?

I'd tell ya but wouldn't want to go off topic. Suggest you do like wise.

Since many Chinese tourists will not stay in Kunming, but head to more touristy places in Yunnan, I'm wondering how many will change plane at Changshui to get to their final destinations, and how many will take subway or other transport downtown and then to other travel nodes - like the high speed train terminal.

I'm thinking that for many the latter option would give a chance to see at least a bit of the provincial capital, and also some countryside from train or bus that they wouldn't catch from air.

Thus the question is, how rest of Kunming's transport system is up to take this expected increase in air passengers.

Changshui already has two full size runways with a length of 4000 and 4500 metres thus can handle the largest airplanes in the world. Now Changshui is mainly handling single aisle planes (Boeing 737 and Airbus 320 types) which require at this altitude a runway of 2150 metres. So most likely they will add some shorter runways.

I'm just curious what the expect all those additional passengers to do in Kunming. Kunming is not exactly full of interesting things for tourists to do and its hard to see that changing in the next few years.

The interesting stuff is elsewhere in the province, and the provincial airports in those regions are already expanding themselves, with more and more direct flights to bigger cities in China bypassing Kunming altogether (e.g. Wenshan to Guangzhou, Lijiang to Chengdu, Tengchong to Beijing, Zhaotong to Chongqing).

Especially as the Chinese population begins to decline, foreign tourist arrivals continue to decline (as they already have started doing), the national high speed rail network continues to expand, and the national airspace gets more and more crowded, one would expect overall air traffic to decline, not rise.

China's airspace is already maxed out to capacity, and significantly strained by military drills which often force civilian flights to divert from their normal flight paths. China's domestic flights are already some of the most delayed in the world. Expanding the airports on the ground does nothing to solve the problem of congested air space.

I would guess that the number of people who will be able to afford to travel by air will continue to increase, even if the population declines.
As for there being not a lot to do in Kunming, it has always been the springboard to other places in Yunnan. I just see more people using the springboard.

Indeed tripling passengers to 120,000,000 is quite a lot and is more than the largest airport anywhere in the world at this moment. As a hub Kunming is not very suitable either at this moment because of the high fuel prices compared to airports nearer to refineries but when the oil pipeline from Myanmar comes up to steam this might change.

Part of the growth of passenger volumes could be explained by the trend that more and more people nowadays fly and instead of having one longer holiday there is a tendency for more frequent shorter holidays.
A relative working in outbound tourism here is quite busy with flights out of Changshui to tourist destinations which include now as well Sri Lanka. Apparently there are quite some charters now as well going to Siem Reap in Cambodia and Nepal. So part of the growth is not inbound tourism but outbound tourism.
The other trend I see now is that on major routes like Beijing and Shanghai wide body aircrafts are used instead of the single isles ones used before. These require some 3000 metres of runway so cannot land on any of the other airports here in Yunnan.
The Chinese airspace is congested but they are working on modernising the air route system.
Kunming itself might not have too much to offer but one of the largest tourist attractions in Yunnan, that is the Stone Forest, depends on Changshui airport.

Geogramatt, who says the Chinese population is declining?

@Ishmael
The Chinese population isn't declining yet, but it will start declining soon.
This is common knowledge. Ask any Chinese demographer.
China is going the same way as Japan, Italy, Russia....
China is ticking demographic time bomb.
Soon, old people will outnumber young people by huge margins, and the traditional Chinese social system of the young caring for their elders financially will be overwhelmed.
The Chinese leaders realize this, and that is why they are now encouraging Chinese people to have more babies, like they do in Japan.
Unfortunately, young Chinese people just dont' want to have so many babies.
Yunnan is not a good example. The birthrate in Yunnan is much higher than in the coastal cities because of its heavy minority and rural populations.

Young Chinese people in the coastal cities view having children as a huge financial burden.

Well, now that I'm a prophet, I prophesize that the Chinese population will continue to increase, but at a smaller percentage growth than previously, at least until the planet dies. But this doesn't mean that we need all these new airports & airport expansion, or that getting everybody in the air alla time is likely to improve the overall situation.

@Ishmael
The only way China's population doesn't start declining in the next 20 years is if China starts welcoming millions of immigrants from foreign countries, and I don't see that happening soon.

@Geogramatt: Interesting about the population, maybe the article is correct, thanks.
Still doesn't necessarily justify all those airports, though.

according to a forecast by global research company Euromonitor International, China will surpass France to "become the world's most visited country by 2030... the most popular holiday spot in the world with the largest number of both inbound and outbound travellers... overtaking the US and Germany, with 260 million outbound tourist trips by 2030."

Changshui expansion may be a good idea after all.

A thought on the aging population in China. We should not forget the economic changes that have occurred in the last two generations.
The people of retiring age over the next 10 years (50-65 now) are the generation who made the big money. What will they do with the money when they have time on their hands? One of the things they will likely do is travel.
This generation of middle class retirees is not the poor, financially dependent, aged who rely on their children for support. In fact many of them are supporting their children financially.
These people are mobile and rich enough to travel in a way that their parents could only have dreamed of. There are millions of them.