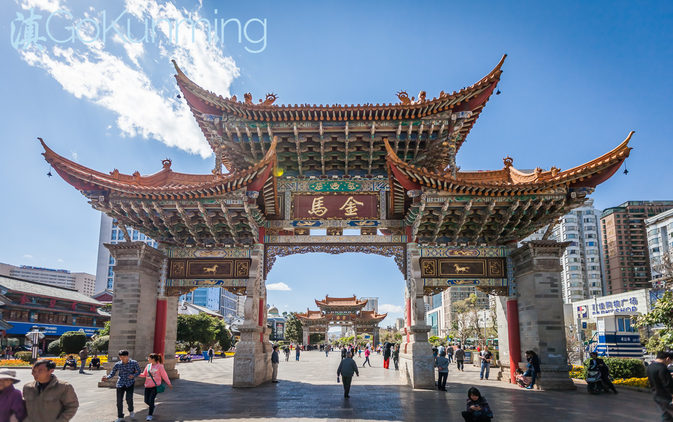 At around this same time last year, Kunming urban planners announced plans to create an "air defense shelter" under one of the city's major thoroughfares. History appears to be repeating itself, as the pedestrian street just north of the iconic Jinma Square (金马坊) will soon contain a multi-use underground area capable of housing civilians in times of war.

The walking street Sanshi Jie (三市街) runs north to south between Zhengyi Lu (正义路) and Jinma Square. That entire stretch of road will be converted for use by cars, buses and bicycles, with pedestrian traffic directed underground. When completed, the below ground facility will feature an assortment of small retail spaces.

Although Sanshi Jie will remain open to foot traffic while the project is being built, the path will be significantly narrower and businesses flanking it will close. Construction is expected to last through 2020 and plans include much more than just a new subterranean walkway.

For reference, the image below shows the project's scope. The section in green represents the 17,000 square-meter underground passageway that can be used as an air raid shelter if Kunming is ever bombed. The yellow portion of the map is Jinma Square, under which a new shopping mall is being built. To the west, the blue part is an currently under-construction subway stop on Metro Line 1. The red area is a large hall that will connect the individual parts. 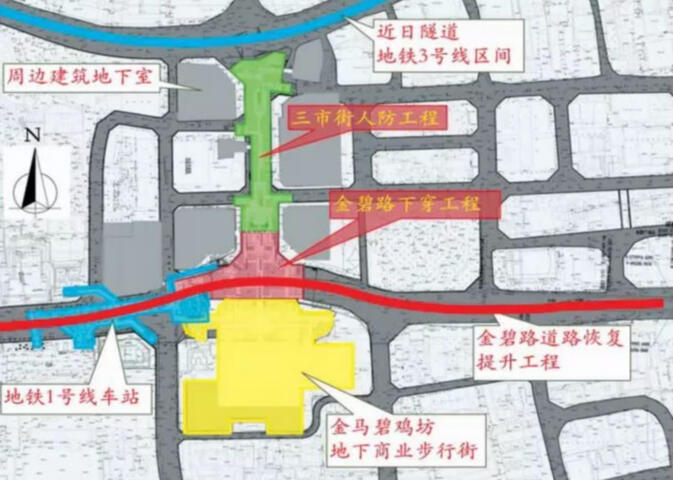 When completed, it will be possible to walk from the future subway stop on Dongfeng Xi Lu to Jinma Square while underground, a stroll of about 400 meters. The estimated price tag for the 'Jinbi Road Recovery and Improvement Project' is 588 million yuan (US$89 million).

Before 1949, the public area that is today called Jinma Square, and its famous pair of gates, sat along a busy road through which much of the city's traffic heading east and west had to pass. Since their original construction nearly four hundred years ago, Golden Horse and Emerald Chicken gates have become the defacto symbols of Kunming.

Sanshi Jie, under which the bomb shelter will now be built, possesses a slightly more prosaic history. Literally 'Three Market Road', the name comes from a time in the past when cows, sheep and pigs were all sold from separate retailers up and down the street.

I wonder how many other cities are preparing for war too.

National 'progress and development' have been coming around to hit us up backside the head ever since it got started.

Many years ago in Beijing on a very cold and windy winter day, I had to go to 中关村 (zhongguancun) to buy some camera stuff to take on Spring Festival. Walking out of the campus I ran into a student who was going there as well so I invited him to join me in the taxi ride. For some reason we could not get closer than 3-4 blocks to destination and were left with a walk facing North into the biting wind. No problem as my student turned guide and led me into a building and down stairs deep underground. We walked through huge underground rooms with high ceilings. I was amazed so the student took me down another level as we walked North,

My guess, after checking a map, was the we walked about 700 meters and the voids were about 80-100 meters wide. My guide told me this was a bomb shelter.

A few years later, these spaces were, in true Chinese style, were bustling with businesses. All partitions and fixtures were movable and temporary so it wouldn't take but minutes to restore most of the empty space. In some areas, escalators descended and rose and it seemed as if the buildings above expanded downward. In other areas, the huge void spaces remained empty.

Clearly a plan was in effect. I have no idea what it was and I had no interest in asking questions.

There have been bomb shelters below many Chinese cities for many years - like, half a century. This is true of Kunming.

And now we also have metro stations

For the life of me I'm having trouble reading the above map.

I thought Line 3 & Line 1 are perpendicular from one another, not parallel.

My bad, after careful reading, the "red" line isn't the actual Red KRT Line 1 that goes North to South. It may help to zoom out the map with actual KRT Lines we are accustomed to seeing as reference.

@bilingualexpat yeah, that future part of the metro line 1 under construction is doing a 90° turn from the Tangzi Xiang station on Beijing Lu on the project map.