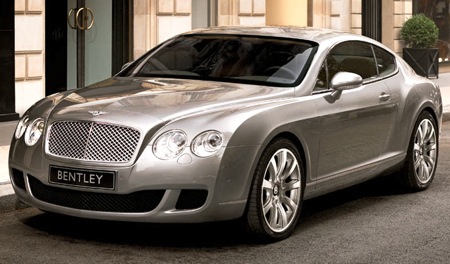 A Bentley Continental GT, similar to a 5-million-yuan hybrid model purchased on-sight last week by a customer in Kunming

Undaunted by ubiquitous traffic jams and parking shortages, Kunming's car owning class is going upmarket, spending large sums on luxury cars as well as underground parking spaces that cost more per square meter than most apartments in the city.

On Friday a man walked into Kunming's first Bentley dealership, which opened on Dianchi Lu in April. He immediately paid deposit on a new hybrid version of a Bentley Continental GT, one of only 30 such cars in the world. The next day he completed payment for the almost 5 million yuan (US$738,000) vehicle and drove it home.

Sales at the dealership, Bentley's tenth in China, surprised even the general manager for China, who said, "Kunming is going to become a big base for Bentley in Southwest China, driving sales volume in the whole country." The dealership sold 10 cars during its first three months of operation.

On Sunday the developer of of a new high-end housing complex in Kunming's Guandu District began selling 12-square-meter parking spaces in the complex's underground garage for 110,000 to 150,000 yuan each depending on location. After selling 52 spaces before noon, the sales office unexpectedly increased the price to 180,000 yuan.

Such anecdotes suggest that wealthy Kunming citizens are willing to pay large sums for the status, convenience and sense of freedom offered by private cars—despite ongoing congestion issues.

If Kunming continues its strong economic growth and adds significantly as expected to both its physical area and population in coming years, such anecdotes may also belie hopes that new highways and construction of a six line metro system that began in May will eventually ease congestion on Kunming's streets.

Vanity of vanities, all is vanity, and especially car ownership!

Where does it all stop? Kunming is a jungle, inhabited by animals who care only about themselves. Overcrowded, filthy, stinking ... the Chinese citizen (male especially) is the epitome of selfishness.

There is never going to be any relief from the congestion in Kunming. Get out while you can!

if the local authority would make laws to ban anything other than a Bentley in the metro, or better still within the 3rd ring like it did with the motorbikes, ok ok ok maybe the rolls, mercedes or lamborgini might also apply just in case you lot protest, problem solved!

I think the problem is that this city wasn't build with the thinking that it would ever afford cars so little to no parking spaces were made. Now we are having to many cars blocking "sidewalks" and we the pedestrians have to walk on the streets with the bicycles, e-bikes, motorcycles, cars, truck, buses. So terrible! There's no solution. Even with the light rail and the subway, it will be as if no change was made.