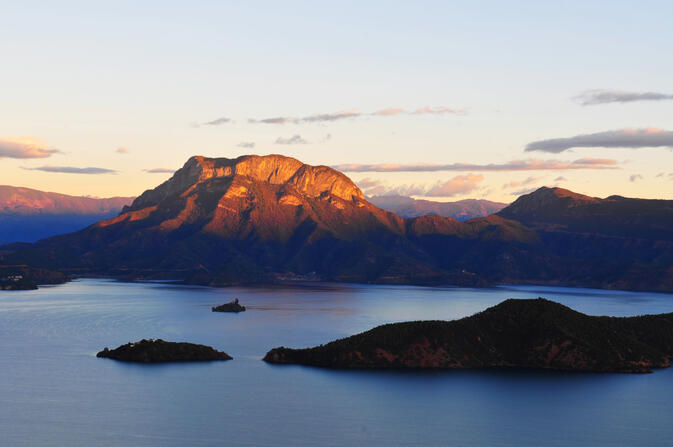 A video of a short-lived brawl in Yunnan is making the rounds on social media and microblogging services, causing a stir even though not much happened. It was filmed in all its pixelated glory over the National Day holiday at Lugu Lake in the northwestern portion of the province.

The scuffle — video of which was published online by news website The Paper — broke out after local vendors repeatedly admonished a group of tourists for throwing garbage into the lake. After one final round of rebukes, the two sides erupted into a short-lived skirmish in which at least one participant picked up a boat oar and began swinging at other people.

In total, the video filmed at the Sanjiacun Pier lasts only four seconds, although the fracas may have been longer. At one point it shows a group of three people lying on the dock where the fight started. The combatants were reportedly separated before law enforcement personnel arrived. Local authorities in Yunnan's Ninglang County issued a statement naming the litterer as a Chinese national surnamed Chen. He — along with several other people with minor injuries — was taken to a nearby hospital where he has treated for a dislocated finger.

The police report ended by saying "The case is being investigated further". Mr Chen was throwing sunflower seeds into the lake, which may be an offense that goes unpunished, although it is possible his participation in the fight may land him on China's ever-growing travel blacklist.

While the event itself will no doubt soon be forgotten, it briefly highlighted the ongoing evolution of Chinese public consciousness regarding garbage disposal and social responsibility. Several comments left on QQ's streaming service — where the video has been viewed a somewhat astonishing 44 million times — called for a travel ban for Chen, while others deemed him "low class" and "lacking morals".

Lugu Lake straddles the border of Yunnan and Sichuan. The area is known for its beauty, as well as for being fairly well managed in terms of pollution prevention. This year over the National Day golden week, a reported 88,000 people visited the lake, drawn by local Mosuo minority culture and pristine natural views. In a China where environmental consciousness has taken on patriotic importance, it appears locals are willing to fight to keep what they have.

the 57th minority in China is the 垃圾族. Whenever wherever I am trekking I never get lost since I simply follow the discarded trash. I used to stop the fiendish culprits but they seem to consider national scenic areas as giant trash bins. Of course, not all of them. Often other Chinese hikers cheer me on as I shout at the miscreants using bad words and bad grammar. Sure the next generation will be pristine.

To be fair sunflower seeds don't sound like the worst type of litter. Aren't they organic? Don't they just return to nature?

I love the way the four guys are just lying down at the end of the video, Playing the victims no doubt. What are they waiting for, compensation?

might be organic, but so is paper. someon still needs to pick up the litter. if you think seeds insignificant, suggest you go to a chinese wedding and see the mess of shells under the tables when people have finished, multiply by number of coachloads of tourists. that is a lot of crap to pick up, and still disrepectful if people ask you to stop and you just flip them off

There's industrial pollution, plastic bags in landfill and floating round the ocean, traffic fumes, raw sewage dumped in lakes, global warming etc eyc and you really want to see people beat up for chucking a few sunflower seeds around? Bizarre

Lugu Lake, known to the local people as Motherlake holds special religious significance for the local community. Any form of littering therefore is not acceptable however biodegradable that litter is.

poop is natural and a useful fertilizeer, i wouldnt want it on the carpet, or on a public path

LOL. I like your first sentence, and your penultimate one. I'll cheer you on too!

Well I still think sunflower seeds are no big deal and neither is a sprained finger. As for foreigners shouting at Chinese litterbugs ... it isn't likely to be very effective. Lugu lake has become a bit of a tourist trap and has attracted a fair number of idiots hoping to experience a walking (or perhaps walk-in) marriage. Let's hope it's remote enough and high enough to avoid the fate of Lijiang. I read somewhere that lugu means fall in. Carefully fall into the lake.

Rich tourist arrogance is most likely the trigger.. Farmers in Mercedes.

Well that may well be true in this case. Put a peasant on a horse as my mum used to say. On the other hand I've come across very intelligent, sophisticated and liberal minded people whose hotels spew raw sewage into lakes. Lugu lake suffers from this problem not sunflower seeds. I wonder if The Paper would be so keen to report on it.

sewage in the lake stories are nice and now fuxian hu is outlawing swimming (a bit over the top, perhaps, but seems to be an effort to keep one lake in China clean)

In this dispute, I'm with the local vendors. Tourists often act like a-holes away from home, and relatively well-off hotel and business- owners who provide them with their tourist experiences are much to blame as well. Tossing sunflower seeds is pretty minor, but I'm with the local vendors, and the incident seems to demonstrate the very real growth of environmental consciousness in China over the past 15 years or so... well, among some, anyway.

Alien mate, I thought you were non-violent. If sunflower seeds merit a beating, what should happen to my cultured hotel-owner acquaintances? Heads down toilet and flush?

the beating wasnt about seeds. the beating will be about what was said in the aruguement. the arguement started over seeds

So you were there?

@cloudtrapezer: For some reason I imagined it was the tourists who started it, after being 'rightfully admonished' - anyway, I'm not necessarily endorsing oar-swinging by anybody, but it sounds to me like the tourists are the problem that needs to be worked on, not the local vendors.

An example of tourists damaging what they came to see.

Who are the local vendors' customers if not tourists?

I think most of us have come across customers we would rather do without. The idea of "firing your customers' has been around for at least 20 years now. www.customerexperienceinsight.com/[...] The days of 'the customer is always right'are long gone.

OK, cloudtrapezer, agreed. Tourism is an industry run on an absurd basis that produces contradictory demands in the promotion of profitable businesses dependent on catering to rather absurd (especially in the case of ethnic tourism) dreams of a relatively new tourist industry, and I agree with what you say about the Chinese media. The contradiction evident in this recent scarp between local vendors and, apparently rather arrogant, tourists. The route this kid of development is taking, however, is not likely to get less contradictory as the tourist industry become less 'new' - the best you'l get is a 'PC', smug, attitude among those who benefit from it and still consider themselves above it all.