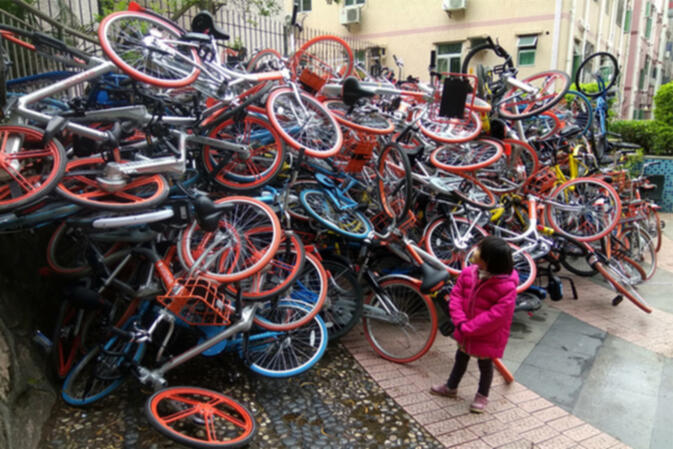 Patience with an excess of shared bicycles has come to an end within Kunming city management circles. An edict issued on July 20 states that no new public bike companies will be allowed to start up operations in the Spring City and no additional bikes will be added to bolster existing ranks unless they clearly replace outdated ones.

In explaining the need for such a law, municipal officials cited the unending work of looking after discarded bikes, as well as a glut that far exceeds need. Before any shared bikes arrived in Kunming, the city conducted an assessment of how many might be necessary to effectively cut down on traffic congestion. The agreed upon number for the entirety of the Kunming municipal area was 300,000.

Start-ups such as Hello-Bike, ofo, Mobike and other companies first introduced the "shared transportation economy" to Kunming in the spring of 2017. Since then, more than 350,000 multi-colored bikes have flooded the streets and alleyways. According to officials:

The rapid expansion of the number of bicycles, the chaos they cause, the lag in operational and maintenance capabilities, the accumulation of vehicles during peak periods [in key areas] and the occupation of public spaces have created a difficult problem for urban managers.

The new rules surrounding shared bikes go into affect on August 1. They also restrict children under 12 from taking part in ride-share transaction. A spate of regulations spelling out exactly where bicycles can be dropped off — and more accurately where they cannot — is also included.

Each of the six businesses currently licensed to rent out their fleets of bikes will now be audited and ranked according to unspecified "scoring criteria". Those performing well will be allowed to increase the number of bikes they have on the road, while those receiving poor grades will lose corresponding market share.

Underscoring the drawbacks to Kunming's shared vehicle market, three days before the new law was issued, a man made news for calling the police to inform them of a shared bike graveyard. The dumping ground near Xiba Lu is reportedly a jumbled mountain of discarded and mangled bikes covering 750 square meters. Speaking of the pile, one local resident told reporters, "This is not only a waste of resources, but also an obvious safety risk".

At last, some common sense effort to rein in the madness.

Seems to me there should be a law requiring the companies to repair all bikes that are reparable.

uworkable. who decides if bike if repairable? the ownder does. poacher gamekeeper scneario

dazzer, got a point there. But what if the bike companies were restricted as to the number of new bikes they could put on the street, per month or year?
It just seems to me that in a world where the human species produces increasing amounts of junk, a bit less imagining that NEW is necessarily GOOD would be a worthwhile idea to implement.

Taxis running around the city empty looking for trade. Bikes laying broken and stolen in every alleyway and river. It's a total Fxxk up. Who is actually in control? I thought Kunming was supposed to be improving in efficiency and within the environment. What a mess!

There is a silver lining though. I heard they are coming up with a brain-sharing program.

Anything that discourages the gas-guzzlers is good.

Hummmmm comments mysteriously disappearing, must be a glitch in the matrix

Nice set of pictures on this topic here:
www.theatlantic.com/[...]

Looking at the link in the last post. Really got me thinking about the carbon footprint of all the share bikes in China. Following on from that the footprint of all of the disposed of share bikes. If we remember these bikes are mostly steel, the production has a considerable environmental effect. These bikes seem to be disposable, which begs a question about the sustainability of the business model as well.

Steel and aluminum can be reused by melting it down again. This takes quite some energy and will create quite some pollution of the burning paint and plastic parts but especially the rubber tires which are not removed from the bricked up MoBikes in one of the pictures.
Indeed cycling looks to be less environmentally friendly if it goes this way. The electronics in these bikes contain lead-tin solder and copper and the material from which the battery is made all ending up as waste.

Beats building and junking more cars. Like I said, there needs to be a system which leads to having the ones reparable repaired.

Many of these bikes aren't broken. Chenguan confiscate even new ones just because they aren't parked within the designated yellow lines forming a rectangle with a bicycle logo painted in it. I've seen Chenguan carry them onto the back of their trucks even though the assigned parking for shared bikes are just a few meters away. Moreover, public parking attendants throughout the city would misplace them on purpose to make room for their ebike spaces. The penultimate destination are mass bike graves similar to the ones seen in The Atlantic link shared by lemon lover. Their ultimate fate, it seems, is to be destroyed.

Being carried away by chengguan doesn't necessarily equal being junked. Anyway, if this is what happens, it shouldn't be hard to have them put up for resale, or have them returned to the company that owns them at low cost - finance the chengguan that way.

dazzer, I agree with you. Know any useful alternatives?

How else do the bikes get dumped in that great heap if not via chenguan? Osmosis? The invisible feet of Adam Smith?

All right, so even more reason for instituting a system like the one I've mentioned - junking all these bikes is ridiculous. Or are you suggesting that the chengguan. are making money by junking them?

I say yes, until carcasses of share bikes start floating on Panlong River.

Mobike ought to repaint in Man United red & gold, to at least for a moment pander to their FC hooligans.

Manchester United ranks #1 in the Premier League for...

Most fans arrested for alcohol offences:

Most fans arrested for public disorder:

Conclusion: Kunming is more civilised because they don't play football here.
Wait a minute; Xi Jinping wants to expand football in China. This country is going down down down...........

At least Manchester is leading in all the statistics ;-)

Tongue-in-cheek jab at Man United Red Devils alludes to grains of truth. Beyond high tea and croquet, northern UK is plagued by rough neighborhoods, particularly in the Greater Manchester region where football is their main source of escape & pride.

However "uncivilized" Kunming may be labelled, it's a much safer place to dilly-dally after midnight than over there, not to speak of vulnerable targets like shared bikes.

manchester needs the civilizing influence of Chenguan,, or are the thugs in manchester carrying out the same role in disposing of bike litter but before it becomes an issue,, like here?

And MoBike pulled the plug:
www.theguardian.com/[...]

Gosh. Rough neighbourhoods in the north of England. Who'd have thought it? Some people run a long way to find a comfortable suburb.

I had to visit a couple of the areas just outside the north and east of Manchester city centre 20 years ago, and I was shocked by the levels of poverty. In the last 20 years it has not got better.

On my Mobike app, there's a section displaying your Mobike score. In it, a link to a description page on "How can I increase my Mobike Score?" In the second part on "Safe Riding," item three caught my attention:

"3. Cooperate with traffic police; do not abandon the bike and run if approached."

I shite you not.