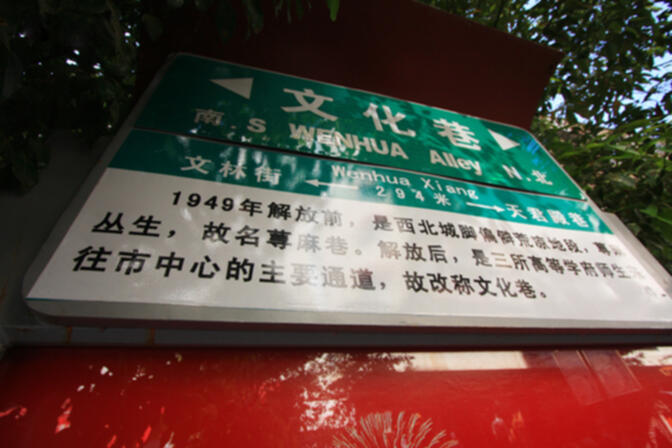 For the past six years Wenhua Xiang (文化巷) and several other central Kunming alleyways have filled up each night with vendors selling a wide assortment of goods. Relations with brick and mortar stores whose owners pay sometimes astronomical rents have been at times testy, while the presence of so many peddlers and shoppers has created something of a daily traffic nightmare. The situation appears to have come to an end this past weekend.

On the afternoons of January 17-20, large groups of chengguan (城管) — or city management officers — began unceremoniously clearing unlicensed merchants off of Wenhua Xiang. Similar actions were reportedly carried out on Yuanxi Lu (圆西路) by the zoo, Sanjia Xiang (三家巷) in the city's west and Tangshuang Lu (塘双路) near the Panlong River. Once the roads cleared, 'patrols' remained in place to make certain no one returned.

The chengguan — who it bears noting have looked the other way regarding street vendor activity for years — confiscated carts, display tables and merchandise. All seized property was immediately deposited in garbage trucks and crushed. Stores and restaurants with any signs, refrigerators, chairs or other effects on the sidewalk suffered the same fate. 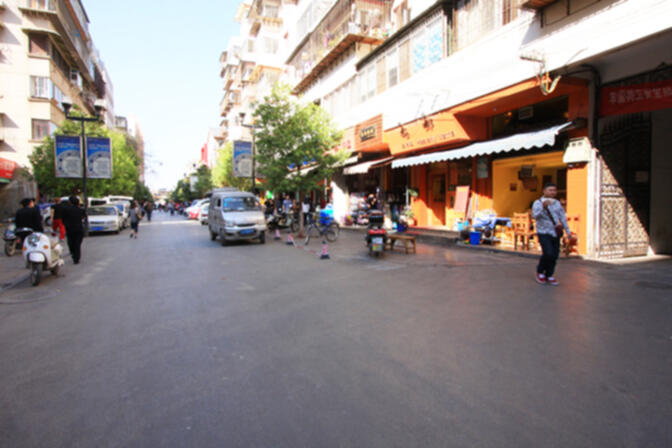 Once the streets were clear, collections of urban management officers began playing a recorded announcement declaring "Street vendor activity is no longer allowed". Local newspaper Capital Times also published a public notice, which reads in part that the effort is meant to clear space and alleviate "traffic chaos". In the case of Wenhua Xiang, such concerns stem from nearby Yieryi Dajie being converted into a two-way street, presumably in early March.

The three-day clean-up on Wenhua Xiang saw the eviction of 98 now-illegal street stalls and the ticketing of 146 cars for parking violations. In the future, according to the Capital Times report, those parking on the sidewalk or otherwise blocking pedestrian traffic in the area will be fined 150 yuan. Furthermore, they will have three points deducted from their yearly twelve-point driving record.

Many of the shop owners on Wenhua Xiang are approaching the disappearance of the nightly market with cautious optimism. After years of expressing frustration over lost revenues amid skyrocketing rents at community meetings and impromptu police station gatherings, the situation appears to have finally been resolved. Said one business owner who asked not to be identified, "This has happened in the past right before Spring Festival or big government meetings. We'll just have to wait and see if it's permanent."

Although the street markets were somewhat interesting - I'm actually glad they cleared them off the sidewalks and are also clearing the streets of illegally parked cars. The area around wenhua xiang looks and feels much more relaxed now.

I am happy to see the street cleared in the pic above, also looking forward to not dealing with that annoyance when I return next month. I do fear, however, this will lead to cars driving faster/less responsibly in this area.

Seems to me that the clearance of this market is, on balance, a good thing, but such determined activity by the chengguan, apparently carried out in the unnecessarily rough manner which has been their trademark, must have been at the orders of some serious source in government or Party, at some level. Would like to know what level that was, and why it all seems to have come down so vigorously and all at once (the timing, just before Chunjie, doesn't strike me as odd - there's usually a coming-to-an-end and then beginning-anew theme around this time of year)?

I hope it sticks. Street venders are nothing but a nuisance.

Interesting observation, Alien. One has to be around a while to understand these tacit signals. Similarly I was thinking about VPN shutdown, I dont necessary buy the official line. There can be other reasons too.

Things could heat up pretty fast - in already hot waters - with the new administration, right. Are you thinking along these lines, like I do, A? :) Its great to watch this drama from abroad, how does it feel over there A ? :)

Okay, but it should be consistent, cos its not just vendors, who are only trying to make an honest living, blocking the roads and pavements. The parking in the middle of the road, across junctions, across pavements which I see nearly everywhere everyday is ridiculous. Once in a blue moon you see a traffic officer putting a ticket on them, but it clearly isn't frequent enough or severe enough to deter dangerous parking. If you are happy to let people buy cars (and accept huge revenues in taxes on said cars), you have to manage the problems that come with it. As well as law enforcement, that means a proper place for the cars to be parked. Multi storey car parks with cheap rates would probably do the trick. Or those vertical lots you see in London and NYC that can somehow shuffle the cars.

The problem with providing convenient parking for everyone is that more people will choose to buy cars or drive into the city when they would have otherwise taken transit.

The standard fine for illegal parking is 150 RMB. Problem is, it's very poorly enforced. The streetside parking is also poorly managed. Those people are supposed to be keeping a lid on bad parking, but they will often direct drivers to double park, blocking the street, or even park on the sidewalks, so they can collect more money.

As for Alien's comment, I was told that this raid was directed by the city government, while previous enforcement was done on the district level.

This next part is speculation, but I bet someone is in hot water right now for taking money to look the other way. All the vendors on Wenhuaxiang used to pay each night for their slots, and I'm pretty sure a large cut of that went upstairs somewhere, probably to the district chengguan.

I think street vendors are fine, although not nearly so many together as are on Wenhuaxiang.

As for the chengguan, I hope enough get in hot water to eliminate the pay-to-look-the-other-way syndrome.

Happy to see that mess gone. Parking problem? Move out of the city.

The street traders in and around wenhua xiang were complete pests with a strong thuggish element. They deliberately encroached on almost the entire pavement to force people to slow down and look at their tat. They were the main instigators of the xenophobic attack on Salvador's a couple of years. Many of them were second generation rich idlers driving fancy cars. About time they were cracked down on. Shame it wasn't harder. Good riddance

I take cloudtrapezer' comment, or anyway most of it. As for moving out of the city, another choice would be to use public transportation or a bicycle within it as much as possible.

I hope early morning food vendors are not eliminated. I've bought jian bing & wu da na bing from the same people for 12 years, now, & the sky has not fallen yet.

Wouldn't worry about that happening, Lester - I've seen no indications of it around town.