No end in sight for Xuefu Lu traffic upheaval 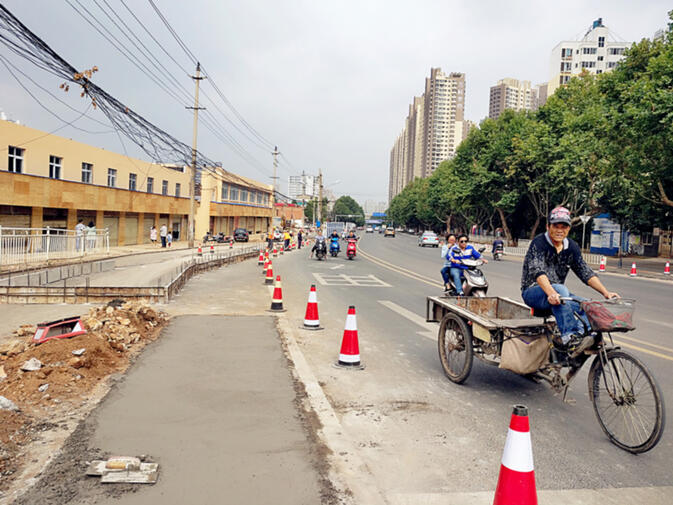 The major Kunming thoroughfare of Xuefu Lu (学府路) is a bit disordered these days. Shops have been shuttered or torn down entirely, bus stops have moved or are missing, and work crews are busy digging ditches and ripping out trees. So, as GoKunming user Ocean asked late last week, what exactly is going on?

It turns out there are several contributing factors, the largest of which is the construction of Kunming Metro Line 4. Planned to be finished and in operation sometime in 2020, Line 4 is the longest of the city's six approved subway routes. The 43-kilometer track will eventually connect the southeast portion of Chenggong (呈贡) to the area around Haitun Lu (海屯路) in the northwest. In preparation for a rise in expected foot traffic, sidewalks are being repaved and bus stops set back from the street on Xuefu Lu.

Upon completion, Line 4 will encompass 27 stations, the largest of which will be located at the intersection of Xuefu Lu and Jianshe Lu (建设路). The work crews currently tearing up the former are preparing to lay new electrical, water and internet infrastructure before work on the Jinding Shan Station begins in earnest, perhaps as early as this year. When construction does commence on the stop, the current state of Xuefu Lu may be preferable. Eleven exits are planned, making the station one of Kunming's largest. 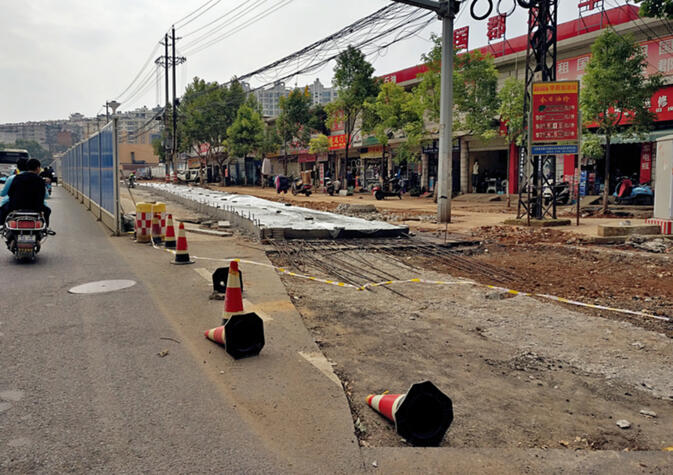 Besides periodic gas, water and electricity outages in neighborhoods around Xuefu Lu, trees are receiving the most attention. Several hundred of them have been removed over the past few weeks, and area residents have taken to the mayor's hotline to complain. In response, city officials issued a statement over the weekend explaining the trees have been taken away to recuperate after being damaged by a cold snap last winter. Once recovered, the trees will be replanted along the road.

Another contributing factor to the general chaos on Xuefu Lu is that more than 30,000 households are currently being switched from meiqi (煤气) — a form of dirty-burning gas created during the production of coal — to tainranqi (天然气), or natural gas. The neighborhoods affected by this change are clustered around the Hongshan (虹山) and Jinding Shan (金鼎山) areas. The infrastructure necessary for the switch was delayed in certain areas around Xuefu Lu because of recent rains.

Longstanding rumors that Xuefu Lu will revert to a two-way street — as it was until 2008 — remain unmentioned by local media outlets. Regardless, it appears the current condition, or one similar, may be the new normal. Not only will building the Jinding Station throw two major traffic arteries into disarray, but another subway station will be under construction at Xiaocai Yuan soon (小菜园), perhaps rendering traffic patterns around Kunming's university district a complete mess for quite some time. 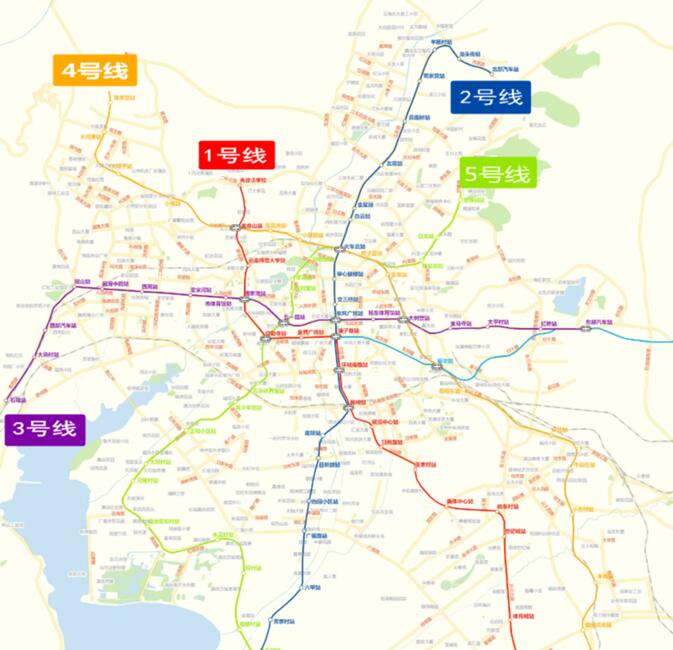 Kunming's planned and existing subway lines. Line 6, to the airport, is not shown fully.

Excellent article and very informative. Thanks.

Are there any approximate dates for finishing the other subway lines?

according to the illustration though, line 4 will not go through xuefulu, it will be the line 1 starting/finishing there

ah no, my bad, it indeed goes through xuefulu of course!

I was told that Xuefu lu is going to revert to two way on Jan 1st. I thought the source was reliable. It also looks to me like they're widening the road which would support the two way theory. But I guess I may be wrong. Which is a shame because the one way system means traffic is diverted to the perennially blocked Dian Mian da dao.

"Taking the trees away to recuperate." I didn't see them taking the trees from Xuefu Lu, but I've seen them removing them from other parts of town, and the workers were basically just chopping the trees to pieces.

Based on what we've seen for the other metro lines, Xuefu Lu is going to be a mess for years. All of the problems they have complained about: bedrock, difficulty managing traffic, etc, are going to hit them at Xuefu in spades. There are also, if my sources are correct, extensive bunkers down there from WWII, which were probably expanded (without maps) during the CR.

If they don't revert Yi Er Yi to two-way, that whole quadrant of the city is toast.

No need to worry @Xiefei. In my rush to get the article out, I didn't do enough digging. Xuefu and Yi'er-yi will revert to two-way streets on January 1, 2017. Sorry for the misinfo:
m.kunming.cn/kmart-4302851.html (Chinese)

It'll likely be a real mess for years, as has been, and still is, the case with Renminnanlu.

I second Liumingke. Excellent article and very informative. My old neighborhood. Not regretting at all that I'm not there now.

All these big wide streets should be two way. It's ridiculous that they're one way. It increases total km driven, increases traffic, and makes the streets less pedestrian and bicycle friendly, and furthermore it is bad for the local business owners and economic development. The only reason xuefu lu was a one way in the first place is because a lingdao thought it would be a good idea. My friends in the planning department advised him not to do it, but do you think the lingdao listened to the planners?

Xuefu lu can be made two ways without widening it. DON'T widen it. Terrible idea.

The subway building works won't be anywhere near finished by Jan 1st 2017, surely?

Subways are scheduled to be finished by 2020. The 2017 date is for when Yi'er-yi and Xue Fu will become two-way, but the subway construction should be chaotic for both streets for the next few years.

As far as I can see there's two separate things going on. Conversion of Xuefu Lu to two-way traffic and construction of a subway station. I was told the disruption on Xuefu Lu was due to the former. Not sure where the subway station is going to be but not on Xuefu Lu according to what I was told. Anyone know definitely where it's going to be?

There are already signposts up on XueFuLu pointing to the station locations.

Nice article me love it thanks gokunming for the info

I'm now told the signposts I referred to before might be fake ones put up by real estate companies in the area to encourage people to buy flats nearby. Whatever next?

From what I can gather from various websites the Sujia Tang station is going to be on the corner of Xuefu lu and Jianshe lu. There'll be another station called Baini Shan near one of Ligong Daxue's gates on the corner of Xuefu lu and Lianhua zhengjie. The Jindingshan station will be by the (disused?) oxygen factory halfway round Jindingshan beilu which loops between two junctions with Xuefu lu. If anyone has better info please let us know.