By Vera van de Nieuwenhof in Features on September 16, 2019

A while ago, just before one of their uplifting gigs, we caught up with the animal-friendly band Puddles. Coincidentally we met with them when it was raining cats and dogs, at the tail-end of the rainy season. We talk to them about the trials and tribulations of life as career musicians in Kunming, and the deeper meaning behind the lyrics.

How did the band come to be? A long time ago, now lost in the mists of time and many beers, Tom Carlier started playing the piano at the age of seven and guitar at 15. Ever since he has been touring as one-man-band Kettering Bug and in different band formations in his native Australia. 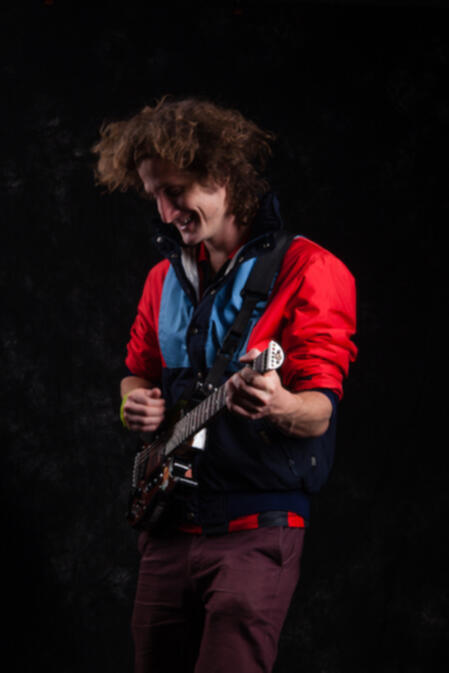 Dan Scott (better known as Danjo) learned to play the guitar from his dad and played in a post-rock-punk band called Bear Jam during his college years. He eventually found his stringed fate when he stumbled across a banjo in the middle of a Michigan forest where he was participating in a three-week storytelling class in the wilderness. However, his life as a full-time musician didn't start until he moved to China for study and work. He brought his guitar with him. 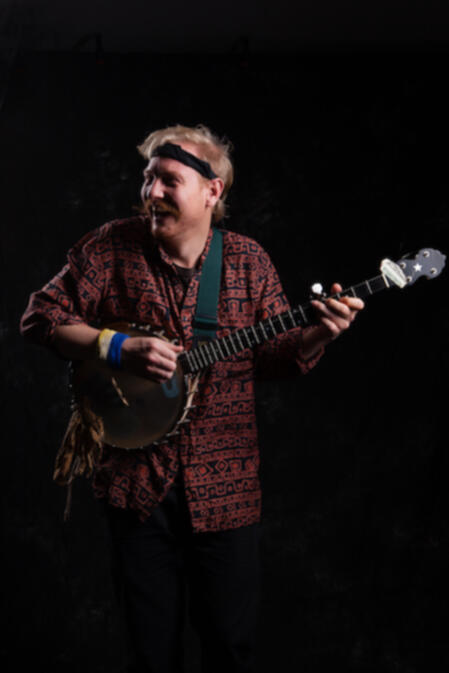 Tom and Dan first clapped eyes and ears on each other when Tom came to visit his brother in Dali in 2015, where Dan was often found playing at Bad Monkey. Tom went back to Australia but returned a year later, realizing that in China he could play more gigs than would ever be possible in Australia. He also didn't want to play on his own anymore.

We're curious about the band name. Tom tells us it comes from an Australian book: I can jump puddles. It's about a kid with polio, which inspired him - how to dance in your own pain. Happy music, with sad lyrics.

For the first few years, they were an itinerant band. Moving from China, they tried to break into the Vietnam music scene in 2016. After a short stint in India they realized that China offered them the musician lifestyle they wanted, without the necessity of a job on the side. 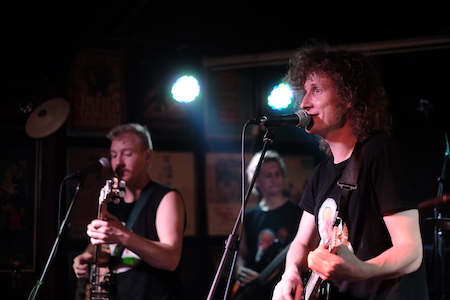 In the Bad Monkey days in Dali they were called Mud Butt, and played with narcoleptic bass player Andy who often fell asleep on stage.

They have mixed feelings about Vietnam. It's a beautiful country, they had some great bandmates. Mary, who joined the band in Hanoi with a broken leg in a moon boot, still plays with them here in Kunming. The clubby venues and EDM and trap taste of the Hanoi crowd were not really suited to the sweet Puddles tunes. On top of this, they were hit with a period of bad luck. Their guitarist broke his leg, money was running out and Dan and Mary contracted dengue fever. 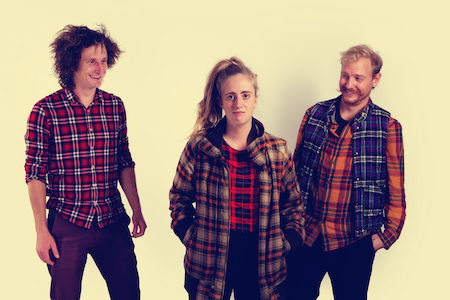 Bandmate Dirty P hitchhiked back to Kunming with US$50 in his pocket. After a brief stint in Arambol (Goa, India) the rest of the band also made it back to Kunming. In Goa some of the concepts that have come to define Puddles saw the light, such as Have You Seen This Chicken. This later evolved into Chicken Shit Bingo: introducing live chickens during the shows. We can't vouch for people, but no animals were ever harmed during a Puddles gig.

In Kunming, they were taken under the wing of Sam Debell of production label Sea of Wood and otherwise known as Shanren percussionist and for promoting Yunnan minority bands and music festivals. He offered them recording time in a studio and got them into the festival circuit. They put some tours around China together and haven't stopped playing in the Middle Kingdom since.

Puddles' most recent exploit was the recording of the video for their song "Animals". Eight days of shooting involving lots of people and buckets of fake blood were smeared out over two months due to bad weather. This resulted in 15 minutes of storytelling that had to be compressed into a three-minute music video. The overall impression is akin to Buster Keaton and his fast-forward silent movies. Watch the Animals teaser here:

By now we can say that Puddles is an established band on the Yunnan musical scene. They have international and Chinese fans, who are attracted to their gigs through personal and persistent outreach by Dan and Tom. The Chinese audience likes the music but does not always understand the lyrics. Luckily, there is a lot of la-la-la to sing along to in the choruses. Puddles wants to take this opportunity to give a shout-out to their biggest Kunming fan: Kasey has been to every single Puddles gig, and is also in the Animals video - look out for the owl.

About Animals, what do the lyrics actually mean? All of the Puddles songs have an innocent and fun vibe to them, but is there a deeper meaning, a hidden layer? Tom, who writes most of the lyrics and music, says that they are more therapeutic than story-driven. The point of a Puddles song is that it has to make you feel better. A bit of sweetness. When he first started composing they were mostly spontaneous spur-of-the-moment songs, now they are working on more orchestrated tunes.

It is no surprise that their biggest influence is the band Animal Collective. 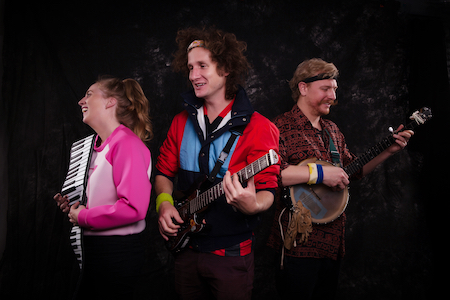 Dreaming big and a reality check

When I ask where Puddles is going to be in ten years from now there is no hesitation. In a mansion by the ocean and the mountains, with a big studio and a farm.

Unfortunately, it is getting much harder to earn money as a musician in China. In March this year in Chengdu new rules came into effect that mean that for every gig at a large venue a costly performance permit will need to be acquired. Recouping the cost of these permits make it very hard to earn money with touring. However, playing at smaller venues is still worthwhile. Also, a lot of musicians outside China don't get the experience that Puddles has had, with lots of opportunity to play and grow as a band. They say that China is the only place where you can live of music without a job on the side or busking. All in all, China has been very good for Puddles.

We would like to add that Puddles has been very good for Kunming, bringing their cute tunes to venues around town. Puddles runs the weekly Tuesday open mic at Turtle and this is also where you can catch them live every Sunday. Follow them on their official WeChat account: 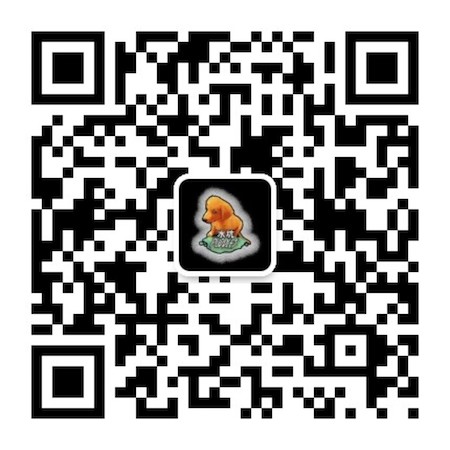 You dont need to hear this music to know this stuff is a good way to castrate yourself both intellectually and physically. Please dont torture us, oh, modern men.

Bit harsh Peter. Would you prefer if they played the lyre?

18 days without P99. What a blessing that was. But he's back in his usual offensive way commenting a music he never heard.

Im making a rock song called "Beta males in China", got plenty to pick up inspiration to lyrics from.

Btw great to see the thriving creativity there, hundred flowers blooming. When they gonna have a gig at some camp?

Yeb we all know P99 likes Alpha males like Alex Jones and the likes and we are all looking forward to his performance of his rock songs.

For those not familiar with P99 lyrics I like to point you to this earlier work of him called 'Bakery 88'
Oh,....the ciabatta with cheese.
Theres so much cheese on the bread,
(and enough butter too),
that you almost feel guilty being treated with it for 26 yuan.
Its like buying a cheese with some bread.
Excellent place!

hahaha what? who is this guy? save it for the forums, hater. jeeez.
Puddles rocks 加油 hahaha

what is ironic/amusing/sad/disturbing/puzzling about this soap opera with peter is that the band has the word "nuts" behind them ... am I the only one who noticed?

Don't have a soap opera with Peter here, please.