By Patrick Scally in Features on November 8, 2017 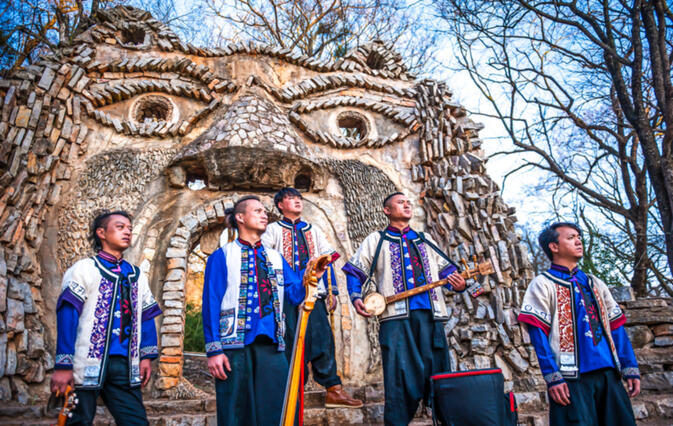 The Yunnan band Manhu — The Fierce Tigers (蛮虎) — have been performing since 2003 and have kept a fairly low profile for most of that time. All the members are from villages in Stone Forest County (石林县) and are Sani people (撒尼族), a subdivision of the Yi minority (彝族). Most of their songs are representative of a distinct Sani style, but also feature other Yi traditions from places like Chuxiong (楚雄) and Weishan (巍山). They are scheduled to perform November 10 at the Turtle.

We spoke recently with Sam Debell and Josh Dyer about the band. Dyer recently spent the summer with Manhu in the United States conducting cultural exchanges at middle and high schools. He is also a musician, amateur ethnomusicologist and blogger who writes about Yunnan music at website Tea-Horse. Debell manages Manhu, and has been a member of another Yunnan band, Shanren (山人), for the past eight years as a percussionist. He is also co-founder of the promotional and festival planning company Sea of Wood Culture. 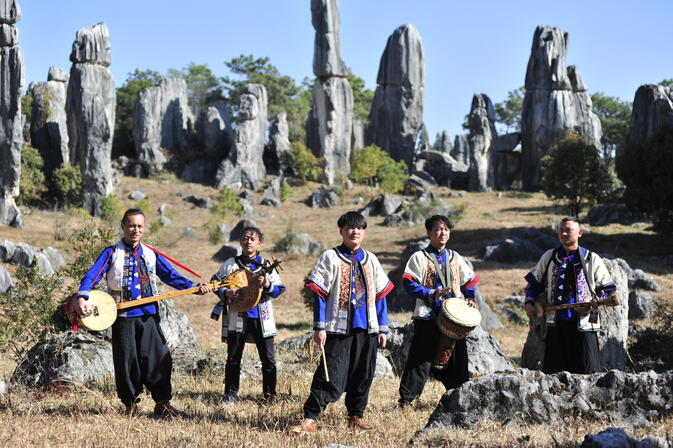 GoKunming: Can you describe a typical Manhu show? What can people expect?

Sam Debell: Manhu's music is an upbeat reimagining of Yi traditional music, modernized for a rock band lineup. Expect a lot of traditional instruments and singing styles but also a solid danceable stomp. Also expect to get involved in some of the traditional Yi dances that Manhu will teach the audience during the show.

GK: What makes the band, in your eyes, unique?

Debell: There are a number of bands that are experimenting with mixing Yunnan ethnic elements with modern music. Shanren, The Herdsmen, Yabaso, Kawa, Amei, Puman to name a few, but Manhu stand out from all of these because they are coming at it from a different direction — they are adding modern elements to traditional music.

Josh Dyer: I think Manhu provides a better focus and depth than most bands in the neo-traditional scene since they are all Sani, and grew up in villages where the traditional culture was still intact. I think you see the results of this in their arrangements, which show a greater sensitivity to the unique character of Sani music, and their use of a broad range of traditional instruments.

GK: The band recently spent time in the United States. What were they doing there and where did they go?

Dyer: The band just spent five weeks in the US on a cultural exchange tour through the northern Midwest. The focus of the tour was music and dance workshops for schools in smaller towns. You can imagine the looks of awe and wonder on the faces of these kids when Manhu showed up in full Sani regalia at schools in places like Prairie de Chien, Wisconsin — population 5,911! The band spent a week in each town on the tour, so there was time for real interactions to take place. By the end of the week people would be stopping the band in the street to say how much their kids had enjoyed the presentation at their school. Public performances and a few visits to colleges and universities were also part of the tour.

Debell: Basically, Manhu were cultural ambassadors to places that had really had no idea about the diversity and development of modern China. The program is called WorldFest, organized by Arts Midwest. Shanren actually took part in the same program a couple of years ago.

GK: Any cool anecdotes from the road?

Dyer: The most memorable occasion was the jam and after-party in the hotel lobby in Marietta, Ohio. Somehow, an incredibly unlikely combination of people had gathered in town to see the concert — two ethnomusicologists from Cleveland, a hippie banjo-player who used to live in Dali along with his globe-trotting brother, the Chinese professor from the local college — who happened to be a native of Kunming — and two American fiddlers who had collaborated with the band in China and drove eight hours just to see them again.

This motley crew ended up back at the hotel where much Sierra Nevada beer was consumed — the band's new favorite! — and a globe-spanning array of folk instruments was made use of. The hotel was incredibly tolerant of the impromptu chaos that ensued, and guests on the ground floor kindly came out to watch the scene unfold rather than complain to the management. Good thing too, because I think that night was a milestone in the ongoing evolution of Yunnan-American folk fusion, and probably a highpoint of recent Sino-American relations.

Marietta left the band with another special memory on the night of the local First Friday Artwalk. The band was set up to play on the lawn of the post office as the event got underway. Since Manhu had been doing workshops all week, all the kids in the town knew the dance steps to their songs. By the end of the show their was a line of about 30 kids doing traditional Sani folk dances on the lawn, while about 200 parents and other bystanders looked on clapping and cheering. I think this really showed to everyone how valuable this kind of cultural exchange is. Those kids probably saw a 40-minute workshop, but they were dancing at the drop of a hat as soon as they heard the band again. Given that southeastern Ohio is not a place known for its multicultural outlook, that seemed like quite an achievement. 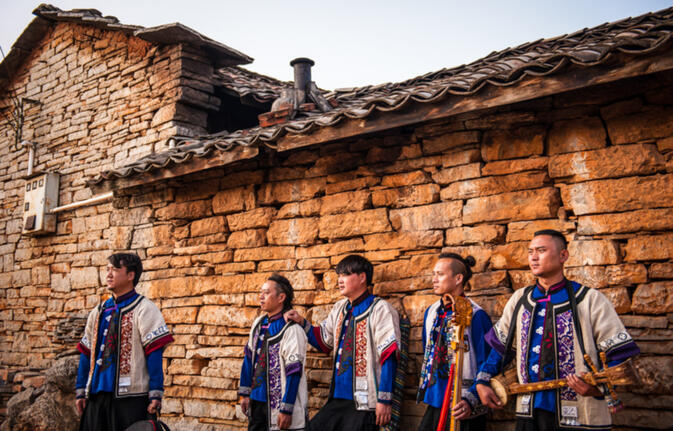 GK: What, for the band, is the motivation for spending so much time away when they could be touring, say in China?

Debell: Manhu have really only just started their international career. They played at an international world music festival in Bangkok in June and then America this autumn. For Chinese minzu bands that don't sing in Chinese, overseas can be an attractive market. The respect they get as cultural ambassadors overseas goes far beyond that what they get in China. Chinese popular culture really doesn't have much room for this kind of music, which is why Manhu been largely ignored for over ten years.

Dyer: In China it is easy to get lumped together with all the other folk and traditional acts. There isn't really an awareness of various types of minority music as distinct entities. However, overseas there is a market for world music, and there is a substantial cache associated with representing a unique and relatively unknown culture. For example, Arts Midwest, the American sponsors of our tour, specifically searches for bands that represent local traditions that have yet to break out into a wider audience. This need for unique cultural performances dovetails nicely with the band's mission of preserving their culture.

Debell: The time will come when the value of artists like Manhu will be appreciated domestically. But who knows if there will be anybody left to do it by then! 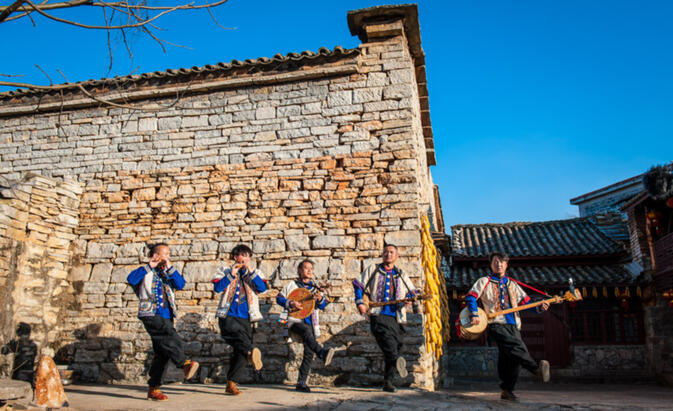 GK: I think for most bands anywhere in the world, the pleasure of performing, with the added possibility of money and fame, is the general motivation. Is this the case with Manhu?

Debell: Manhu have never really had unrealistic goals, which is why they have managed to stay together despite a relative lack of recognition. They have kept the typical personality of their Sani Stone Forest enclave: humble, uncomplaining, and enthusiastic, but not particularly worried about what anybody else thinks. Any success they have is seen as a bonus and not expected. They are essentially the minjian yiren [undiscovered folk artists] of their generation, just passing on the traditions as they learned them, and if other people are interested, then all the better! It's a kind of stability that you rarely see in bands nowadays and a rooted assuredness that you rarely see in ethnic minority people of their age. Hopefully it will allow them to go far.

Dyer: Outside of China, the Yi ethnic group is totally invisible, to say nothing of the Sani. Inside of China the situation is only marginally better. We would love to see this change, but the band has doubts about whether their music will appeal to outsiders. As Sam said, they are very humble about what they do. In some ways, I think the band is going out there to see if they can prove themselves wrong. It's like a crazy experiment to see if they can convince themselves, and the rest of the world, that Yi musical heritage has global appeal.

GK: What's on the horizon for the band?

Debell: Manhu have a follow-up US tour next September which will be planned to coincide with a number of world music festivals in Canada and the US. We are also looking at Japan in June and Bali, maybe in March. In the meantime the plan is to tour extensively to achieve the domestic recognition necessary to make it in to as many festivals as possible for the coming season. For the immediate future, following the Turtle show on Friday, Manhu will be playing at the Tuborg Music Festival in Pu'er (普洱) on Saturday and Sunday, and then at a Yi event in Xichang, Sichuan in December. 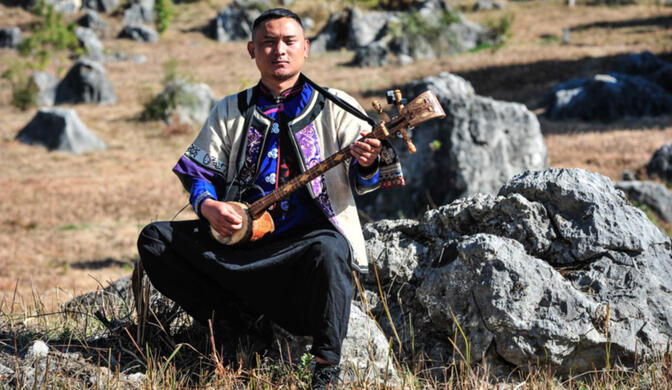 does somebody knows where is this park (with stone faces) located ? Somewhere around Kunming city?

Stone faces manufactured at Stone Forest to boost it as a tourist attraction?

@Annya: Danuohei village (大糯黑村) in Shilin, near the Stone Forest. It's a tiger...