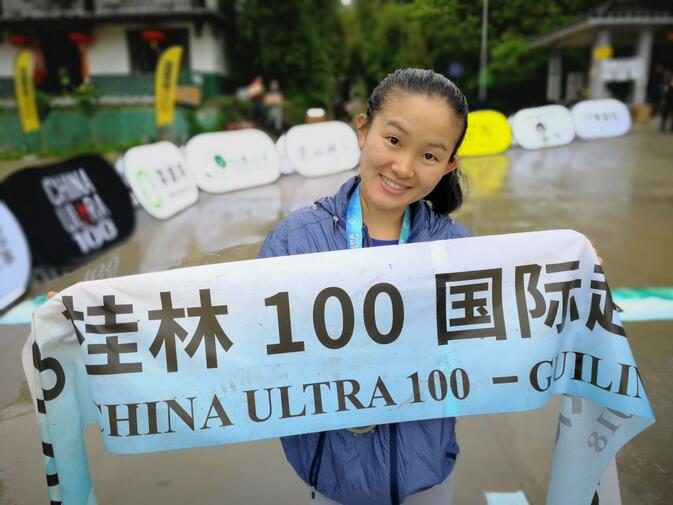 Spending a third of your income on a hobby means that the hobby is important, especially if the rest of your money is either saved up for your future education or sent to your family living in rural Yunnan. Li Zhaoyang (李赵阳), or Xiao Yang to friends, a manager at Salvador's Coffee House, spends at least a third of her monthly salary on her hobby — running. Race registration fees, hotels and travel tickets to races all add up.

She discovered running just three years ago at the age of 27 and, uncoached and running no more than 30 kilometers each week, has managed to notch up some very impressive results indeed. In March, she came tenth female in the 55-kilometer division of a major international trail race — Gaoligong by UTMB — in Tengchong (腾冲), Yunnan. A Franco–Sino partnership, this race is one of China's best attended trail events, a cooperation with Ultra Trail du Mont Blanc (UTMB), the world's largest and most popular trail race and the unofficial Olympics of trail running.

Xiao Yang's result is all the more impressive considering that this race was an ultra, longer than marathon distance, with a highly competitive line-up. Zhao barely trained for it, busy working double shifts back in Kunming. She says that it took a while for the result to set in, and she still shakes her head in honest disbelief at her achievement. 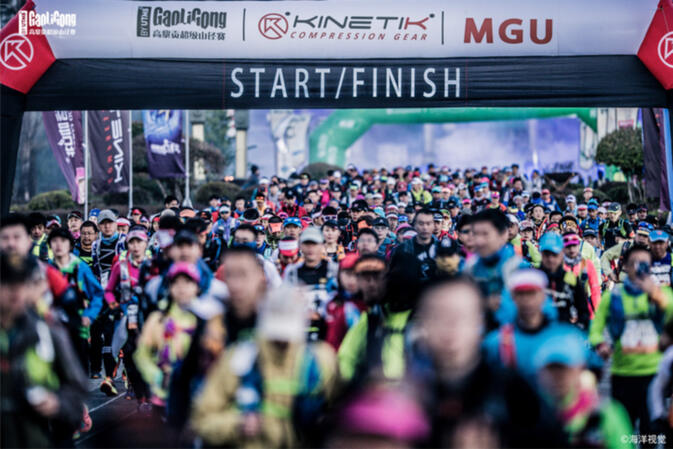 One of her rewards at Gaoligong was a pair of sponsored trail shoes, donated by the Chinese distributor for brand Altra, who brought professional athletes to Gaoligong and were left very impressed by Xiao Yang's result.

A few weeks later, wearing her new Altras, Zhao won the 30-kilometer division of the China 100 Series race in Guilin (桂林). When diminutive Xiao Yang arrived at the rainsoaked finish line in first place, the shocked reaction from one of the staff was, "Look, a xiaopengyou [little kid] won the 30-kilometer!"

Xiao Yang, who originally came from a village near the city of Lincang (临沧) to attend university in Kunming, started running with a belief that the exercise would toughen her up, a preventive measure to protect her health. "In this city, I don't have a family to look after me if I get sick. So I must look after myself and medical care is expensive." 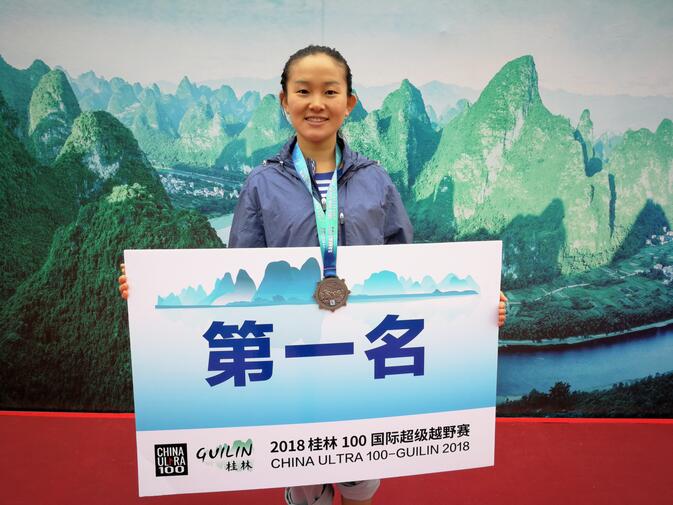 Since 2015 she has done more than 20 races, with the Kunming Half Marathon being her first. Finisher's medals take pride of place in her shared apartment, but her family, back in Lincang, do not share her enthusiasm for the sport.

"My family does not understand running," she says. "My mother just says that I'm crazy. My father says that running is nonsense." Ironically, it is probably from her father that Zhao inherited her running genes. "My father used to run to school everyday, as a kid. He ran, not walked, and ran fast, more than ten kilometers one way. Then back," she laughs. "But now he doesn't care about running. He says that I should just concentrate only my work."

It was at Gaoligong that she finally discovered family-like affection and support for her hobby when the elite invited runners — including some of the world's best like Jason Schlarb from the US and Nathan Montague from the UK — embraced Xiao Yang as one of their own, recognizing her talent and toughness. 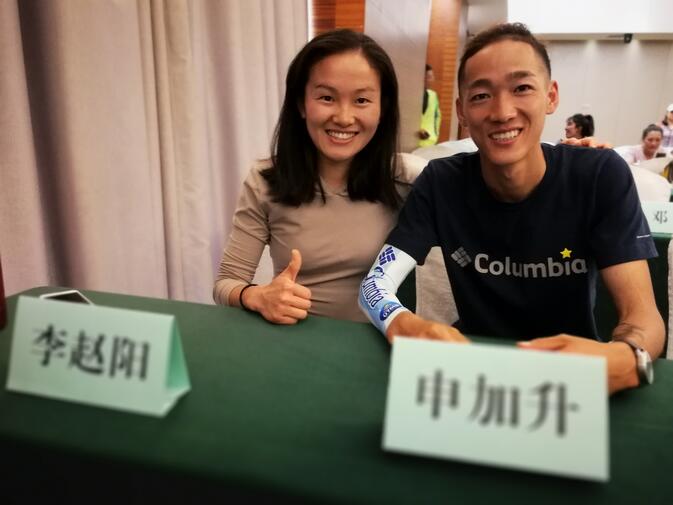 "Before Gaoligong I thought I was small, insignificant. Just a girl running slowly. Then, all these great athletes, people that I thought were so different from me, they were so warm to me, like family. It was great sitting with them at dinner, laughing, and it felt so natural. They were all amazing, but so humble and friendly. Samantha [Samantha Chan, an elite runner from Hong Kong] and Michael [Michael Wardian, world silver medallist over 100-kilometers]," says Xiao Yang, still starstruck.

The feeling of being cared for was especially welcome considering what Xiao Yang had to pull through to finish tenth on the grueling 55-kilometer course through the Tengchong mountains. "I started cramping, then I felt overheated, then I felt like throwing up, my stomach was hurting, then my feet really started to hurt. I did not have trail running shoes," she explains.

And now she has another goal. "I didn't finish my university degree. I need to do it. Now I want to go and study abroad to learn physiotherapy, and eventually help runners recover. And finish university." 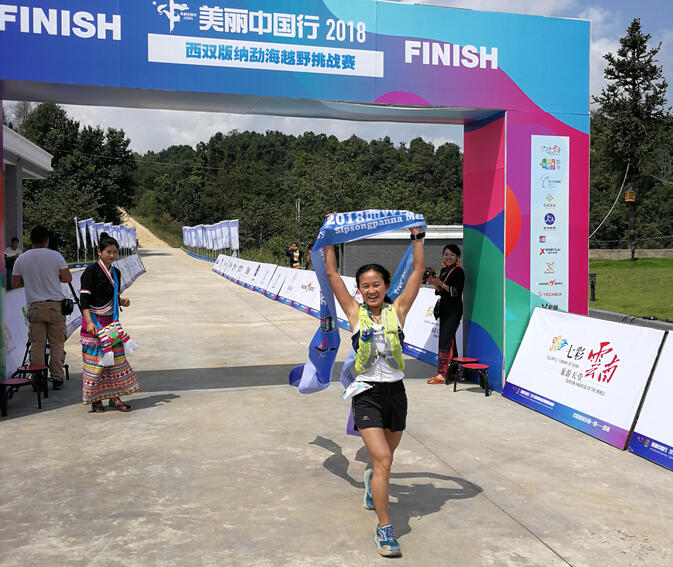 Xiao Yang is saving as much as she can, while battling with IELTS in what little spare time she has leftover. She has her eyes set on studying in Thailand, saying, "I have been there before and I like the climate and the people, I think they are similar to us Yunnanese. I can also keep doing yoga there, go rock climbing, and of course run."

She has a running ambition of her own too. "At Gaoligong, I heard about the biggest trail race in the world — UTMB. It looks incredible. The elite runners I met at Gaoligong — Samantha and Michael — they've all done it. I want to go there too one day and experience it."

Editor's note: Londoner Pavel Toropov is a former elite distance runner based in Yunnan, who has now made a transition from competitive running to race organization, sports media and tourism promotion in China. He is a frequent contributor to various publications on the topics of Chinese tourism, running and the outdoor industry, while also consulting for foreign tourism and sports organizations and companies. He also leads Chinese tour groups to the north and south poles.

Ms. Li took home the finish line ribbon. Not many among us can achieve such a monumental feet (pun intended).

She should kuaidi the ribbon back to her parents in Lincang. Typical, traditional Chinese parents will proudly brag to family & acquaintances of their daughter's running accolades, albeit disapproving in front of her for going off the beaten track so to speak.

Hopefully she'll garner greater visibility and sponsorships in the future!

It's great to have a hobby!