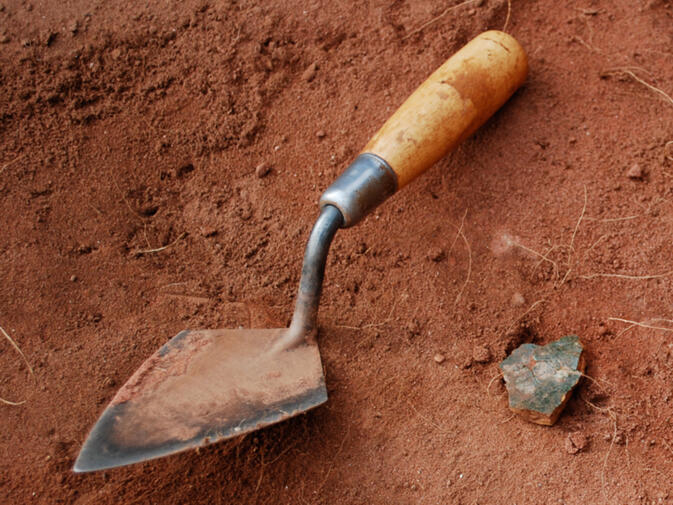 The discovery of an ancient wall in Yunnan may be the first step in unearthing the remnants of a city once thought lost to history. Archeologists believe they have uncovered an important relic dating back more than 1,000 years — a vestige of a country independent from Chinese rule that scientists and historians still know few hard facts about.

The find was made in Dali Prefecture, roughly 50 kilometers southeast of Erhai Lake (洱海) in the tiny village of Dayin (大营村). Researchers from the Provincial Institute of Cultural Relics and Archeology unearthed small sections of the wall earlier this month. He Jinlong (何金龙), who heads the project, believes his team has found the long-lost city of Baiya (白崖旧城).

Baiya means 'White Cliffs' in Chinese, and indeed the excavated area abuts a limestone escarpment in a somewhat remote and poor region of the prefecture. Archeologists have so far found what they believe is a contiguous wall between eight and fifteen centimeters thick, originally built from bricks and pounded earth.

He told reporters, "From what we've discovered of the city's size, location and distance [from other archeological sites], we can say with confidence this is the old city of Baiya." Very little is known about one-time urban center. However, it is mentioned in passing in the Tang Dynasty historical record An Introduction to Yunnan (云南志), penned 11 centuries ago by a scholar named Fan Shou (樊绰). The author, however, did not mention where exactly the city was located, and little else is known about its inhabitants or its rise and fall.

If the find is in fact Baiya, further excavations could produce new clues about daily life during the time of the Nanzhao Kingdom (南诏国). The small independent fiefdom spanned much of Yunnan 1,100 years ago. During its 200-year history, leaders of the Nanzhao gathered enough power to conquer territory in the present-day countries of Laos, Myanmar and Thailand, while also repelling two separate invasion attempts by enormous Tang and Tibetan armies.

For He and his team, the discovery is a tantalizing one that could help flesh out how people lived in western Yunnan a millennia ago — but one they caution may take years to properly excavate, catalogue and describe. Before any of that can happen, He told reporters, a proper survey of the area must be completed in order to best begin digging for ancient buildings the team hopes lay buried but waiting.

The last Mongols of Yunnan

We'll have to wait and see. News reports are pretty fuzzy, but the archeologists certainly seem excited.

Theres a missionary who witnessed end of Panthay rebellion. What he wrote is, that before Qing army arrived, Du Wenxiu hid/put all the treasures in a certain place. Now we are talking about treasures of whole Yunnan, as the Panthays were rampant all around. So theres still a lot to dig up around Dali soil. This is just a small cookie.

And the tomb of the Bai peoples "White King", while to some degree a legend, at least first protestant missionaries (Clark family) in Dali mentioned it. But its a mystery. Many mysteries and treasures around Dali. Still to appear. One of Buddhas teeth may also be in Dali - a legend almost totally forgotten - there used to be so many legends about this Buddhas tooth in Dali, all the way to Burma, (Glass Palace chronicle etc.). Some Dali monks know this legend, and say the tooth will show up when time is right. The tooth is a chakravati চক্রবর্তী by the way, i.e. whoever posesses it has the Heavens mandate to rule the world.

@peter99
Rumors have it as well that Indiana Jones has been sighted in Dali looking for the chakravati in order to keep it out of the hands of the Donald.

Yea, its said Roy Chapman Andrews was the "real Indiana Jones", and somewhere its also said that Indiana Jones character was based on him, and he DID visit Dali. Roy Andrews stayed in Yunnan for months, plenty in Dali - thats around 1920's. Just read his stories and compare it to the ganja trash today to get perspective. Roy Andrews influenced the US presidential family btw, and the Roosevelt family did a Yunnan expedition a bit later. All forgotten now. Jus like the Tooth of Buddha and the Treasure of Du Wenxiu.

My translation of the portion of the Manshu regarding Baiya over here: en.wikisource.org/wiki/Translation:Manshu/Chapter_5

Bái​yá​ City (白崖城; lit. 'White Cliff (Walled) City') is in Bó​lòng​chuān​ (勃弄川; lit. 'Flourishing Lane River-Plain'), which was loyal (to China) during the Tianbao era (ie. 742-756), and possesses cities and east-facing lands, and has five prefectures and cities in total.

It is built against the mountain to provide walled defence, with a height of 10 zhang (ie. 33m). All four sides channel water around the city, which only has gates opening to the north and south.

In the southern corner lies the old city, which is two li (ie. 700m) in circumference.

Inside is the official reception building of Gé​luó​fèng​ (閣羅鳳), with decorated corridors and crooked halls. Behind the main hall lies a courtyard verdant with orange trees and a view over the northern wall.

Beneath the Qīng​píng​guān​ (清平官; lit. 'Site of just and peaceful governance'), the government divides the land in to fields, all of which are cultivated.

The numerous kin of Nán​zhào​ (南詔) also reside near the city.

20 li to the south lies Mán​zi​chéng​ (蠻子城; lit. 'the city of the Barbarian (or possibly Barbarian prince)'), which is the former residence of the many younger brothers and extensive family of Gé​luó​fèng​ (閣羅鳳).

Directly southward is Kāinán City (開南城), which is 11 days' journey.

Yunnan is one the few regions where the ingredients for bronze, tin and copper, are both found. It's no surprise that the Yunnan Bronze Age was especially rich.

1100 years ago would 900s AD, well into the Iron Age. The early Bronze Age in Yunnan woukd be far older.

One of the most groundbreaking archaeological discoveries was published only last month, suggesting modern human ancestors evolved not from Africa, but from China. The "Dali Skull" dating back to 260,000 years ago:

Where would you start digging around for Buddha's tooth?

Well Vicar, you need to understand hindu and buddhist geography/cosmology to dig into this maze. But its just like the fake news today, you need to go beyond the veil to actually find something.

Yunnan had strong hindu-buddhist geography/cosmology before Ming, even called itself Gandhara/Gandalarit just like whole South East Asia has Sanskrit etymology when you wipe away the surface. And you can find this similar structure of an axis mundi symbolized with Mount Meru (Shibaoshan in Yunnan) and other places such as sarced rivers like Mekong (which etymology comes from Ganges) and such. Later - and especially during Dali Kingdom - buddhism came in here, and then we get places like Jizushan, which in fact also is copied from India (Kukkuṭapāda). So you need to dig into this cosmology and find clues. Places like Yogyakarta in Indonesia have similar tantric geography and can give clues.

So the Yuan started to throw sand on this already after they conquered Yunnan - thats when the moslems came in - and even the name "Yunnan" may refer to Ionian (Yunan) and thats the mongol connection. This same time burmese started call Gandalarit (which they used to call Yunnan) as "Turek". Thats part of the Yunan-Ionian connection. So from here on this start to get buried.

But we know legends about Buddhas tooth, that it may in fact have ended up in Pyu (todys Burma). And Nanzhao (todays Dali) raided Pyu and according to many burmese legends (even festivals) they stole the tooth. Thats not only in the Glass Palace Cronicles, there are even festivals and Nat stories today left when Anawratha went to Yunnan to get back the tooth.

We must remember faking things is not a recent phenomenon, and if there was a Buddha tooth put in the 3 pagodas, it was probably fake. When they found a hidden chamber in one of the 3 pagodas few decades ago there was a canine tooth which made them puzzled. Some Dali monks say the tooth has hide itself and will show up later. Maybe thats the case, who knows.

Do you think one of the reasons Aleister Crowley came to Southern China (including Dali area and Hanoi ) was to look for this tooth?

Smashed on opium half the time may not have helped his cause though...

I dont think so, Crowley was a mystic. Nothing in his Yunnan diary about this either.

English occultist Aleister Crowley writes in his autobiography that while studying meditation in Sri Lanka he was:

"permitted to be present at the annual inspection by the trustees. I believe the tooth to be that of a dog or crocodile, but though I got an excellent view at close quarters, I am not anatomist enough to be positive. I am, however, quite certain that it is not a human tooth."