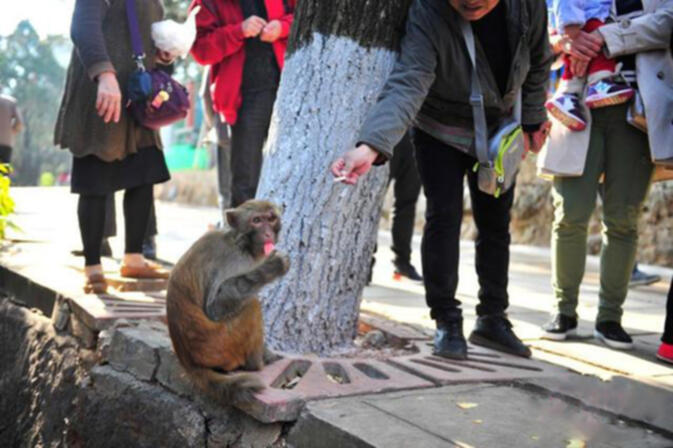 In a developing story that has been ongoing for more than a week, a group of monkeys are on the loose in downtown Kunming after escaping their enclosure at the Kunming Zoo. Despite multiple sightings and concerted capture efforts by zookeepers, the animals remain at large, with one solitary individual thought to have taken up residence in Green Lake Park.

The situation began to unfold on the morning of March 5, when primate staff at the zoo introduced nine macaques — called mihou (猕猴) in Chinese — from Guizhou into an established population of Yunnan monkeys. The two groups did not get along well, to say the least, and a struggle for territorial dominance broke out almost immediately after the new monkeys arrived.

Kunming Zoo staff have reported the older, established macaques won the skirmish, sending the eight male and one female Guizhou monkeys fleeing over a four-meter fence out of the enclosure and eventually, away from the zoo entirely. Zoo employees followed the escapees, but were unable to corral any of them. 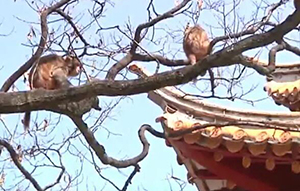 Now, nine days after the prison break, one of the male fugitives has returned to the zoo of his own volition, while the eight others remain at large. Seven of the runaways are believed to be hiding out near the zoo on Yuantong Mountian (圆通山), although their exact locations are unknown. A single male has made his way to central Kunming's Green Lake Park, where he is now thought to reside.

Zoo personnel are unsure how the macaque made his way to one of the city's most popular tourist destinations. Once there, the monkey was initially undisturbed by his interactions with humans. Local media have taken to calling the animal 'Dasheng' (大圣), an allusion to the Monkey King, one of the main characters in the Ming-era allegorical tale Journey to the West.

However, hundreds of photos and dozens of people eager to feed the animal later, the fugitive turned reticent. Zoo staff tasked with tracking him down believe Dasheng remains inside the park, although his whereabouts are not known. Spring City residents with knowledge of any of the eight escaped monkeys, or their locations, are encouraged to call 65164344 or 13619666263.

The account of fugitive macaques randomly scampering through the city is more humorous than upsetting, which is a nice turn of events when compared with a past Kunming Zoo tragedy that was completely avoidable. Additionally, the story raises the possibility, however slight, of wild monkeys becoming a permanent fixture in the city center.

One old Lonely Planet edition on China, with a Yunnan chapter - maybe around 1992 or something like that - can mention that Zhongdian is closed to foreigners, Kunming to Dali takes about 15 hour with bus, where to exchange FEC currency....and also a story about a lion that escaped the Kunming zoo. This took place in night and the lion was attacking people on Qingnian Rd early morning. Have tried to find this story with plenty keywords - Chinese and English - but the story aint on www. Old kunmingren remember the lion well, then theres the old LP of course, wherever it still stands.

Peter99: I remember reading that too. It was in a very old edition.

After all it is the year of the monkey.

Well, they caught one of them in a neighborhood near the zoo. So much for my envisioned monkey utopia:

I saw this in K6 yesterday. That monkey was not happy.

A troop of monkeys..

Are they native to Yunnan?

how's the monkey at green lake doing? has anyone heard anything, I hope he/she is ok! :)

ja, well, you can keep animals in cages where they dont have any freedom, that s ok with most, achso...