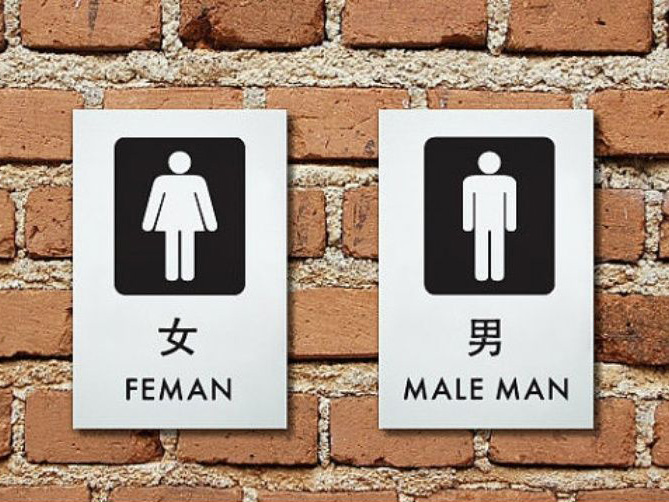 Yunnan's economy depends largely on tourism. Millions visit on an annual basis and every year record numbers of vacationers, both foreign and domestic, flood into the province. The diversity of cultures and gorgeous landscapes draw people in, but an all too common comment when visitors leave is something along the lines of "What is that matter with Yunnan's toilets?"

Up for special derision have been bathrooms on the ever-growing network of highways criss-crossing the province. Often little more than short cinderblock walls surrounding open pits, rest stop toilets, more often than not, are foul smelling troughs of nastiness. Provincial planners have finally decided such circumstances are unacceptable and earmarked 90 million yuan (US$14.4 million) to rectify the situation.

Beginning this year, the "Yunnan Tourism Toilet Rebuilding Plan" will continue through 2017. Each year, 30 million yuan is planned to be spent on constructing new bathrooms or renovating existing ones, mostly along highways. All told, more than 500 public toilets will either be newly built or revamped.

Yunnan is apparently not the only province with such problems, as the National Tourism Bureau has singled out 33,500 bathrooms nationwide that need such attention. Much of the funding for the upgrades in Yunnan will come from national coffers in an effort to "raise standards to A-grade" levels.

According to multiple media reports, Yunnan has perhaps the country's most acute version of this problem, wherein:

Observations such as this do not only come from tourists who visit the province. Three years ago, then-governor Li Jiheng (李纪恒) deemed Yunnan's public restrooms the worst in China. He also somewhat graphically related a story in which after using a highway bathroom in Mengzi (蒙自), the stink of the place remained in his clothes for hours afterward while he attended government meetings.

Hopefully the "Yunnan Tourism Toilet Rebuilding Plan" will follow in the footsteps of a similar, and quite successful, public bathroom remediation program started in Kunming in 2012. That effort was designed to update all communal toilets in the Spring City and bring them up to new standardized codes of sanitation. Spruced up toilets in Kunming are now easily recognizable by their distinctive green and white candy-striped façades.

twas the govornors visit to the bog that lead to the '2 flies' ruling. 2 flies rule just goes to show how out of touch some gov people really are with the real world

Beijing: Free public toilets that are by and large clean and well-maintained.

Why is it that state organizations, as well as private ones, don't bother to find a native English speaker and pay him 50 kuai or so before designing a sign? Note that toilets on all the trains I've ever been on (probably near a hundred) in this, the world's most populous country, have a sing reading "Please flush closet pot".

One doesn't need to be a native English speaker to know how to spell or use correct grammar in English.

Plus that sign doesn't look like it's from a photo (way too clean to be from outside Chinese toilets). It looks like a pic made from MS Paint or at best Photoshop. . Probably someone wanting to add even more fun to Chinglish.

OK but them sings are right there in the train toilet, and there are plenty of other ones that could of bing avoided in 30 minutes or less for less than a hundred rmb.

Our you shure their not from a native English speaker?

The toilets in Beijing are free because they follow national laws,,,Kunming toilets are not because...

@Yuantongsi: is there a national law on free public toilets? That's the first I heard of it.

Beijing's toilets got a big revamp and went free in the run-up to the Olympics. I always figured it was a cosmetic thing for all the expected visitors

During my time in Yunnan, there were a few things that appeared to be inevitable. Among them was the fact that the province would one day become a tourism Mecca. The weather, the natural beauty, the ethnic diversity, the location, the big international airport, etc...just makes this very likely. Also inevitable are the things that will enable this trend. Among them are the development of more Western-style hotels and other "accommodations". Among the latter are clean bathrooms.

I wonder if there is the potential for a new tourist industry here? In Kunming, you already pay 1-2 kuai to use one of their filthy public bathrooms. I bet that most tourists would gladly fork over 6 kuai to use a deluxe, Western-style bathroom.

@Shyam: I pay 5 jiao to 1 kuai for the public toilets. Most western tourist would probably do what you say, but 'western-style' toilets are not really designed to accomodate human physiology very well.

The photo/"photoshop"? Completely wonderful. Can we have some information please, Patrick. Who, where, wtf?

@Yuantongsi: That may have just been a local regulation. Beijing's public toilets have been free for a while, but I remember paying for them in Shanghai well into the 2000s.

As for tobacco advertising, take a closer look. You can't have ads for cigarette brands. Hongta and Hongyun get around that by advertising their mother companies, which are branded as finance companies. It's debatable how well that follows the spirit of the law, but it's right down to the letter of it.

The next step is to set up the bathrooms in wenlinjie-wenhuaxiang businesses to accommodate our number two needs.

@opper, the issue of the toilets in local businesses is the standard of the plumbing, which can be integral to the building and so it is hard to change.

Some of the older buildings would have had retro fitted plumbing, as they were built in the days of the communal toilets at the end of the street. As such the sewer system in the street is also not up to the job (no pun intended).

it's about time transgenders get their own dedicated toilets. a victory for femans.

And I thought it was about cottaging.

Wasn't this obvious 10 years ago?

I once saw maggots crawling out the doorway....I'm serious...

Typical comment from a Yunnan ren..
It's a toilet, it's supposed to stink!!!

This story kind of brought flashbacks to the "Hitchhiker's Guide", where an entire civilization disappeared after they decided to stop sanitizing telephone handsets.

When I read the initial version of this story - it seemed they also wanted to replace the public toilets with western style toilets - but without an associated change in behavioral modification, not to mention MORE frequent cleaning (which consumes more water and ostensibly more chemicals) - the toilets (at least the men's toilets) will be urinated all over.

Some of Kunming's public bathrooms - I wonder why they have urinals, since the floor looks like the men mostly missed the urinal and just peed all over the floor - which is another good reason to NOT wear your street shoes inside your home...in case anyone was wondering why we change shoes...

'I want that head so sanitary and squared-away that the Virgin Mary herself would be proud to go in and take a dump.' - Full Metal Jacket

@Barbara, that picture I found randomly with an image search. The source page is linked to at the bottom of the article and doesn't have any attribution at all, but I assume it is heavily photoshopped (just not by us). Thought a silly article like the one above should be accompanied by a silly pic.

got my letter? i am expecting one from france, there is a french letter machine in the bogs back home

It doesn't matter if the toilets are squats or western style. Yunnan toilets are on a par with rural India and are downright disgusting most of the time. Is it a culture of 'disregard for others'. This article seems to suggest so. metro.co.uk/[...]

Can't connect with the link, but I think it's a culture that promotes very high regard for those you know &/or identify with (begins with family) but not a lot of regard for anonymous others - e.g., 'the public'.

I was out in Phuket, on a lesser known, almost deserted beach by the airport. The toilet was walled, but had no roof. I thought to myself, here we go. To my surprise, the toilet was very clean.

Public toilets in UK are now slowly becoming a paid for convenience. However, the people who take the money keep them clean, very clean.
In China I pay, and some of them are not cleaned. The public toilets in the older parts of town can be the worst. I am sure that the 'keepers' who take the money are supposed to clean them, but if so, no one seems to monitor or enforce any standards.

I have been to a public toilet in a village, that seemed to be a hang out for youths, even though there were no lights. From the light of my phone it reminded me of the betting shop toilets in 'Train Spotting'.

If it's Mai Kao beach, it's hardly comparable to a frequently visited public toilet in a village, though Thais tend to be a lot cleaner than Chinese.

There were ads posted above each urinal at the airport in either Guangzhou or Shenzhen that said: "The civilisation in the restroom determines the level of a nation's civilisation". It was an ad for English learning.