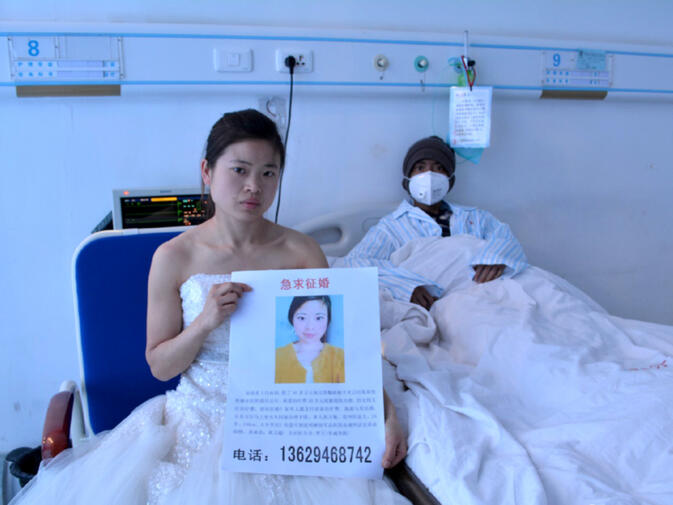 People coming and going at the Kunming Train Station this past weekend were greeted by a strange site just outside the depot's main gate — a young woman dressed in a white wedding gown. She is not married, but is instead looking for a man who will take her as a bride in exchange for helping to save her brother's life.

The unwed bride is named Huang Xiju (黄习菊), and she is offering her hand in marriage to anyone willing to give her 300,000 yuan (US$48,000) or more. Huang's brother suffers from leukemia — called baixuebing (白血病) in Chinese. Their family is unable to cover the cost of previous treatments or of the bone-marrow transplant he now needs to survive.

And so the 24 year-old Huang stands outside of the train station, explaining the plight of her sibling to anyone who will listen. She also carries a sign, which reads in part:

My brother suffers from leukemia, and he has more than 300,000 yuan in medical bills after a bone marrow transplant was rejected. With 300,000 yuan and new treatment, he can be completely cured. Due to insufficient money to pay the cost of treatment, I offer myself for marriage! If anyone is willing to pay the cost of treatment for my brother, you can immediately take me on the train home and complete the [marriage] formalities.

The sign goes on to explain that Huang is a native of Guizhou and that she has a college degree. When asked by reporters for the Yangzhou Evening News how she came to make such a drastic offer, Huang explained that her family is completely unable to pay for either their medical debt or new treatments.

Her brother, she said, has been fighting leukemia for three years and has not been able to work during that time. In addition, the siblings' mother passed away at the end of 2014, leaving Huang and her brother without many alternatives.

Bone marrow and stem cell donations for those suffering from leukemia are difficult to obtain in many countries around the world. An estimated 70 percent of all people in need do not have a family member that is a genetic match, meaning donor banks are incredibly important. On the mainland, the China Marrow Donor Program has a list of 1.83 million potential contributors, but as recently as 2012 supplied a relatively small 3,228 people with transplants.

That's a lot of money! Would never marry a woman because her brother is sick. That's not a good reason to marry. There has to be love in the relationship. I don't see this ending well. Good Luck!

money... i dont understand how can one support such system that creates millions of craziness

If his treatment fails again and he dies, then she will want a divorce. Marry into this family and you will be paying for every relative in the family.

Maybe only son in family and she sacrifices herself - as part of family - to some degree. Its like a classical drama - sort of. Hopefully she will be respected by new family - the respect she deserves - if she does marry. And be happy too. And why not, its not impossible. Saved brother, family, happy marriage, if someone handles the concept of prayer, that would be an aim.

Outside the TRAIN STATION?

Someone should tell her to go to the AIRPORT, an EXPENSIVE RESTAURANT, the BANK, or the GOVERNMENT ... people with a spare 300k don't hang out in train stations.

How few people who comments here can be so f**** cynical?
This girl is clearly desperate, the marriage is just a way to draw attention into her case, is it that difficult to understand?

Good point misfit - tho' its a family not only her.

And the marriage may be a real thing too. If so, its a sacrifice.

Some beauty in the tragedy tho', in a concept of human destinies - in a Modern World - with less and less destinies, anyway.

its easy for us to sit in our ivory towers and make cynical remarkes. the girl is desperate and willing to make a major sacrifice. someting the poor have to do all over the world. marrying for love is a modern concept and no gurantee of a sustainable relationship. making sactifices for family is very common all over the world. in the west we usually do ir for our kids. in the east the larger family is much more important. i hope the girl finds a good man who will be able to provide what she needs, for both her brothers treatment and for a happy life.

Lack of depth in the Chinese health care system.

very sad. How can people criticise the woman for trying to save her brother? It is astonishing that in a supposedly communist country, no money = no right to life.

i go with Haali on this one.
I would marry a lantern-fish to safe anyone in my family.

plus who knows if it works. i know people that were friends or partners for years and when they married, it didn't last for more than a few weeks.
...and...
i know people that met for an hour and knew they'd stay together forever.

and maybe she finds a smart, romantic fella and he gives her the money out of compassion and asks her to get to know each other first. A bloke having 300 thou flying around won't mind losing it over a girl he likes.

i agree with what walter said. the station is not a place for high fliers. but more people at the station being able to relate to poverty related problems.

i can only wish she gets the money for her brother and the bloke of her dreams.

Second that, if my sister/brother I'd follow whatever option available!!!

if she is willing to do something this extreme to save her brothers life, im sure she would be a damn good wife. its obvious she values family over her happiness.

No matter how you slice it, this article is a perfect example of the dysfunction that is now all over the world.

People often ask "why doesn't she/he do this or that". The answer is most times they don't have a choice. It is sad that this world is run by money or the lack of it. Many people stay in abusive relationship because they have no money to get out of it. Many people live in places that is not fit for humans because they lack the money to get out. Many people do things like this because they have no money. I hate this world at times. Nobody should have to do this to get medical treatment. If we stop making wars and wasting our tax dollars, everybody could afford healthcare.

Total Cognitive Dissonance - On one hand we value and cherish a single life with utmost sincerity while simultaneously killing hundreds or thousands without blinking an eye or shedding a single tear. The world is sick and confused. I pray I am not around for the reckoning that awaits all humanity because there will be no where to hide. Our collective sin is Apathy.

So, anyway. The Chinese newspaper - and T.V too - is quite abundant of these touching stories. The T.V. box thing, usually tells The End. But not always the paper (virtual) version. One sort of wonders - so what really happened in the End.

Since GoKunming has some connections to these medias, maybe a "Part 2" - some 6 Months Later?

Heres another great two week old story, of a 13 year old girl - parents no more - who takes care of sister, brother, and old sick gradparents. And she went to try to find work as a dishwasher to get money to be able to support family. But restaurant owners said, she still too young.

"Our collective sin is Apathy"

so how much are you donating then?