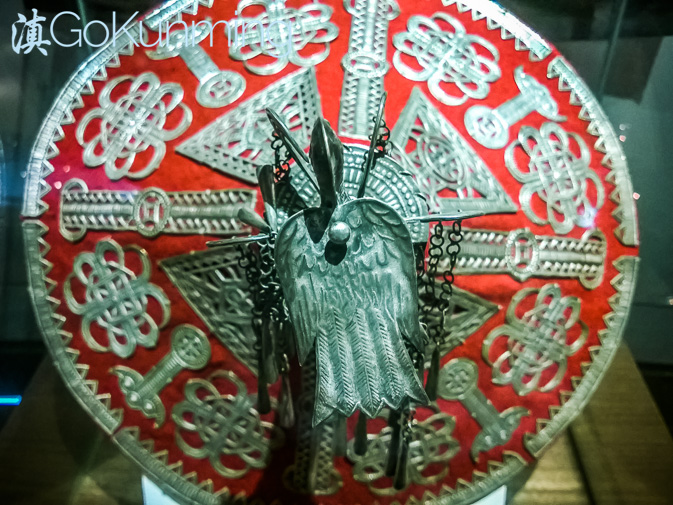 We've passed through the east gate of Yunnan University hundreds of times, and yet the building located directly beside the entryway never really caught our attention. For some reason, on one recent sunny day, it did. We descended the steep steps just past the university entrance and found ourselves in front of the Yunnan University Museum of Anthropology (云南大学人类学博物馆), an entity we had no idea existed.

The tinted sliding doors were locked until 2:30pm, according to a metal placard, giving us a half-hour or so to figure out just what we were looking at. We sat down in a shady spot and did a bit of online research to kill the time. 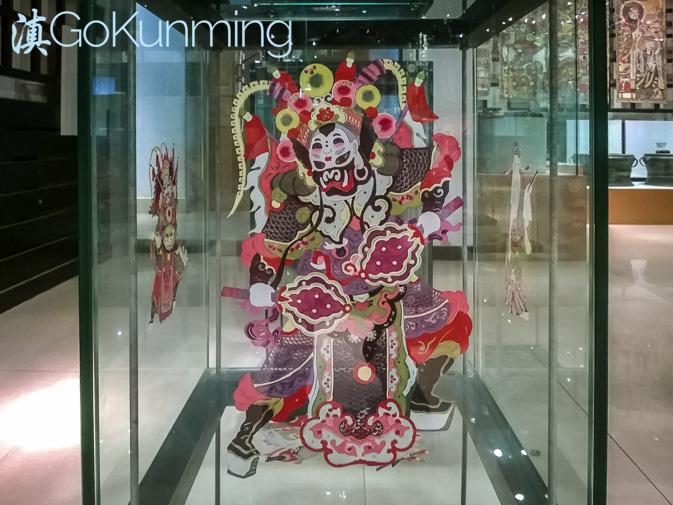 The museum, it turns out, was constructed and its collection established from a donation by Hong Kong industrialists Mr and Mrs Wu Mayao (伍马瑶). The couple contributed US$700,000 to Yunnan University when the institution celebrated the eightieth anniversary of its founding. Those funds were matched by the provincial government and one year later, in September 2003, the museum opened for the first time.

Today, the museum houses cultural artifacts representing the multitude of ethnicities peopling the provinces of China's west. The original collection numbered 800 pieces, items deemed representative of specific cultural groups, their traditions and societies. Over time, the selection of objects on exhibit has grown to more than 2,000, gathered from disparate regions ranging from Hunan to Xinjiang. 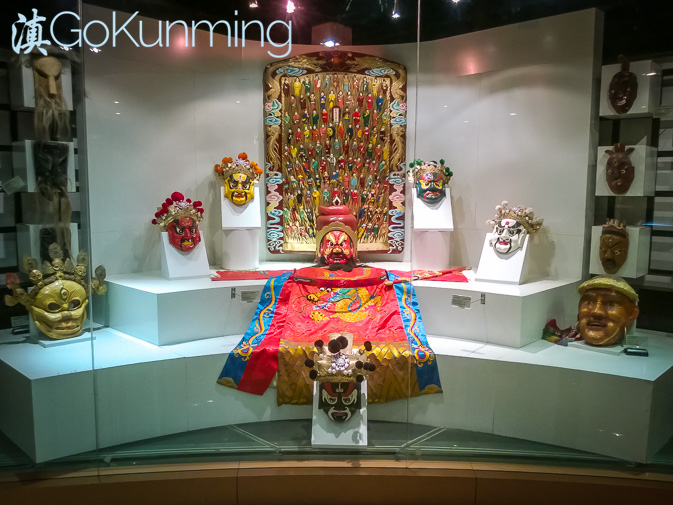 In addition to displaying an anthropological mélange, the museum's endowment provides money for the research and study of minority groups in Yunnan. The facility maintains six research bases in areas of the province with high concentrations of non-Han people.

Yunnan University faculty and students from the departments of anthropology, history and sociology conduct interdisciplinary studies in Jinghong, Mile, Qiubei, Shilin, Tengchong, and Xinping counties. The goal of such research, according to the museum's literature, is "to foster a culture of self-awareness in [minority] communities, and ultimately promote in situ conservation of cultural and ecological heritages". 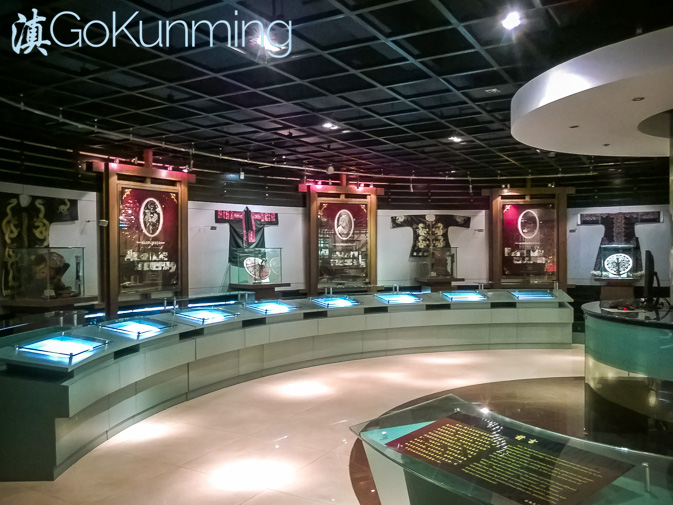 Our interest piqued, we approached the entrance promptly at 2:30, nearly walking into an automated door that didn't open. Through the darkened glass we could see movement and hear a few muffled shouts. Eventually, the doors parted and we walked into a silent entryway where the only light was provided by the sunshine outside. It smelled musty.

We followed a young woman towards an information desk while hastily glancing at tall posters introducing museum faculty and benefactors. "Are you here to take a tour?" she asked. We grunted affirmatively and she set about turning on lights in a previously benighted display room. Thanking her, we stepped inside, still a bit confused as to what we should expect.

It took a second for our eyes to adjust, but when they did, we found ourselves in a crescent-shaped room containing all manner of different artifacts, some of the more interesting odds and ends of China's minority populations. To our immediate left were examples of traditional handmade clothing. Shirts and hats made by Jingpo, Dai and Yao artisans hung on the walls. They adorned the floor as well, displayed under a glass walkway, curiously lying on beds of smooth stones. 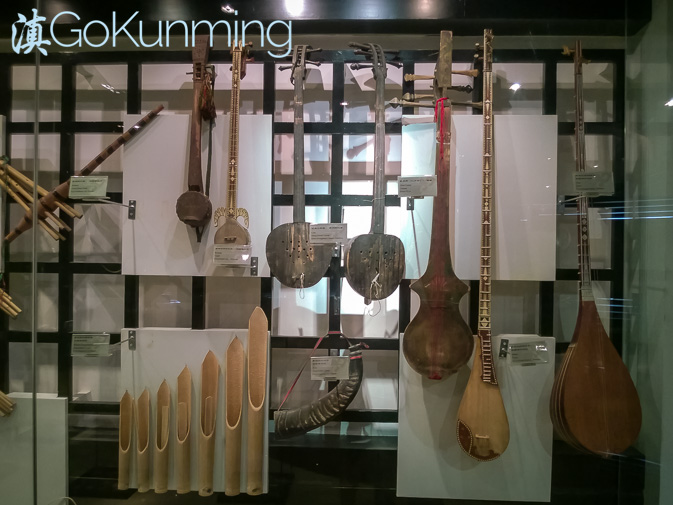 Several computers sat in the middle of the room, attached to large flatscreen monitors. During our brief bout of research outside of the museum, we had read about the museum's audio-visual archives, some of which have been digitized. In fact, the terminals inside were part of an interactive display installed a few years ago. Unfortunately for us, they were not hooked up to any power source.

Elsewhere around the exhibition space, we found a collection of masks used by different cultures for both ceremonial and operatic performances. Next to this hung stringed and woodwind instruments, some of them so outsized it was hard to imagine a single person playing one with any manner of skill. 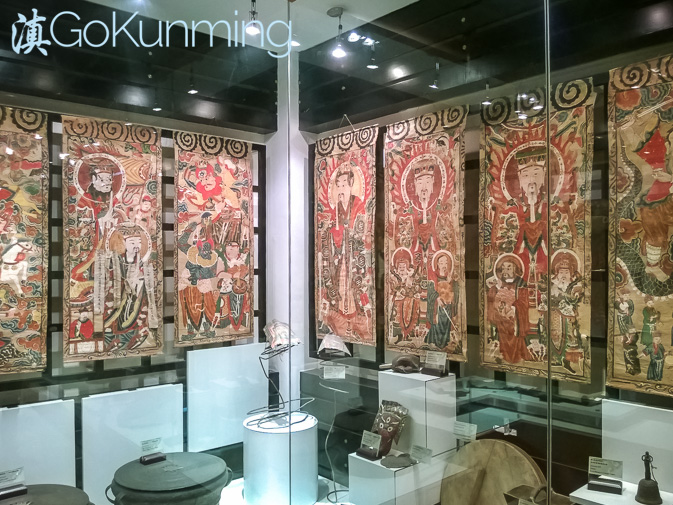 The most colorful section of the hall was arranged with hand-painted Buddhist and Daoist tapestries. Below the ornately decorated textiles sat a hodgepodge of paper, stone and metal objects — a bronze drum originally fashioned in Guangxi, a decidedly non-Chinese-looking bust made in Hunan, and a scroll covered in pictographic script attributed to the Yi minority.

There were woodcarvings and multiple examples of paper cutout art as well. However, the most remarkable display was a set of acrylic cubes suspended at eye-level, each containing pieces of hand-wrought jewelry. Of these, a half-meter tall silver headpiece from Guizhou stood out from the rest, hand-hammered with the delicacy of a spiderweb. We moved on to another exhibition area, passing a small selection of historical photographs. The black and white images were mostly taken in Yunnan during the 1940s and 50s and nicely captured styles of dress and some prominent cultural practices from those times.

While the first room had contained items used for entertainment, religion, and cultural rites, the museum's second hall was lightly stocked with objects of a more prosaic nature. Several looms sat behind glass and small arrangements of carved cooking and eating utensils were scattered around the hall. A time-worn leather saddle and rattan riding crop once used by Naxi horsemen was perhaps the highlight. We walked up a back staircase and found every room on the second floor locked. Retracing our steps to the information desk, we asked the lone employee what was on the upper story of the museum. "Books," she said. "But I've never actually been up there. Right now it's closed to visitors."

And so our accidental tour came to an abrupt end. Admittedly, the facility is not the most engrossing cultural attraction the Spring City has to offer. However, if you find yourself on the Yunnan University campus with an hour or so to kill, the anthropology museum is well worth a look.

Perhaps, if more people begin to explore the museum, curators will consider turning on the interactive displays, let alone the lights. Hopefully, they will also see fit to open the second floor archives — which contain hundreds of photo albums and books — to the public on a year-round basis. The Yunnan University Museum of Anthropology is open Monday through Friday, from 9:00-11:30am and 2:30-5:30pm. Admission is free. We arrived at the entrance inside the campus, but there is also a door facing Beimen Jie, just northwest of the campus gate. The nearest bus stop is Beimen Lukou (北门街口公交车站) and is serviced by line numbers 92, 139 and 187.

If you plan to visit during the summer months, we highly recommend calling ahead to make sure someone will be on hand to unlock the doors. As of this writing, tours in neither Chinese nor English are available.

Sounds like a worthwhile look around having a free entrance fee :o)

Looks like there are indeed some interesting exhibits. However, I get the impression that the focus of the museum is primarily on non-Han peoples and/or on somewhat 'exotic' practices, whereas anthropology in fact can and does include the study of any and all human cultural practices. It is often the typical behaviour and culture of 'ordinary' people, whenever and whatever that might involve, that is the least understood, perhaps because all too many of us assume that we already understand it.

The entrance to this place is weird. Like some waiting hall toa Bond villain's hideout.

@alexkmg
Well then - I'll just have to visit, just for that! Bond villains always seem to have opulent residences and offices - which perhaps goes to show perhaps international megalomaniac crime does pay - until one shows up on the British MI6 radar.

The USA is much less elegant - they just use drones to blast away - collateral damage to "innocents" notwithstanding.