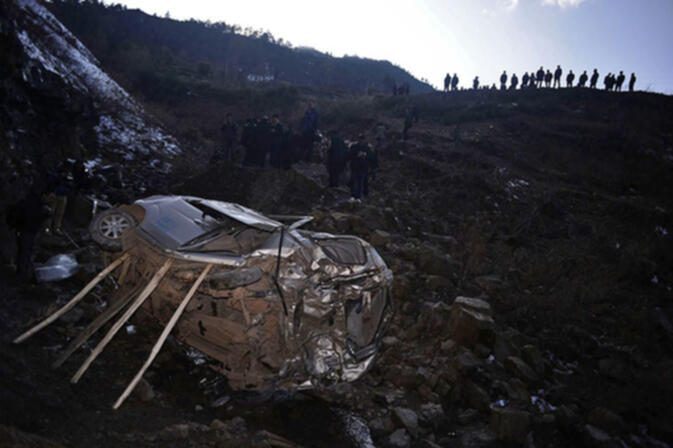 A single vehicle traffic accident north of Kunming has left twelve people dead this week. Icy road conditions have been blamed for causing the driver of a minivan to lose control and drive off a cliff, according to a report by Yunnan Daily.

The incident occurred on January 15 in Luquan (禄劝), an autonomous county roughly one hundred kilometers north of Kunming. A family surnamed Wang, accompanied by several friends, were driving through the mountains to visit relatives when their minivan is thought to have hit a patch of ice.

Arriving at the accident, police investigators and emergency workers found the seven-passenger van in a ravine 80 meters below the highway. Eleven of the passengers were pronounced dead at the scene and the twelfth and final member of the group later died at a nearby hospital.

An inquiry into the crash is ongoing, as is maintenance work on the stretch of road where the accident occurred. Yunnan's Deputy Secretary-General, Yang Bin (杨斌), was dispatched to Luquan, where he is overseeing the investigation and meeting with families of the deceased.

Like many of Yunnan's mountainous country roads, the stretch of tarmac where Wednesday's accident took place is cut into a nearly vertical cliff. Pictures clearly show there are no curbs, guardrails or any other safety measure that could prevent vehicles from leaving the dirt roadway.

A photo essay of the crash, published on website 163.com, reported the Luquan road is known to be treacherous, especially in winter. Several car rollovers along the road have been reported in recent weeks, although no fatalities.

Perhaps not coincidentally, hours after the crash, official provincial website Yunnan Net issued driving safety tips for travelers during the upcoming Spring Festival holiday. The article reminds drivers to obey speed limits, avoid overcrowding in vehicles, refrain from passing on blind curves and to "be courteous to pedestrians".

Kunming city road washers must suspend washing the roads when the temperatures fall below 0.

Up until now they have been completely unaware of their ability to create icy roads by spraying water when temperatures are below freezing.

How can we ask the local officials to make this change? I can't speak Chinese and this is could be a serious problem not only in Kunming but in other areas.

The street washing water is most likely so radioactive that it heats itself up, so don't worry about it.

I'm sure the overloading of the vehicle didn't help matters much...

I'm sure God deciding that it was time for these people to die didn't help much either.

No doubt the driver was speeding. Drivers here think they own the streets. They don't drive defensively. What a pity!

There are some articles where the comments section is unnecessary. This is one of them.

I agree with Heller.

No reason to assume the driver was speeding.

Come on, at least my comments were slightly entertaining (well, I thought so!). But you guys are right, god/speeding/overloading.... amazing all these foreigners that must have been at the accident site and saw what caused it after exhaustive investigation. And it all goes to show that the "ice" story must just be some big cover up by police.

Also no reason city road washing trucks were putting water on the roads in the hills north of Kunming.

Seeing humor or entertainment in the deaths of 12 people is sick.

Unless you didn't read my comment or are just obtuse by nature Geezer, you will notice my humour was not directed at the story but at the comment prior to mine, which also was not related to the story at all other than by the possibility of ice being on roads.

My comment was an observation on overloading. No humour or anything intended.