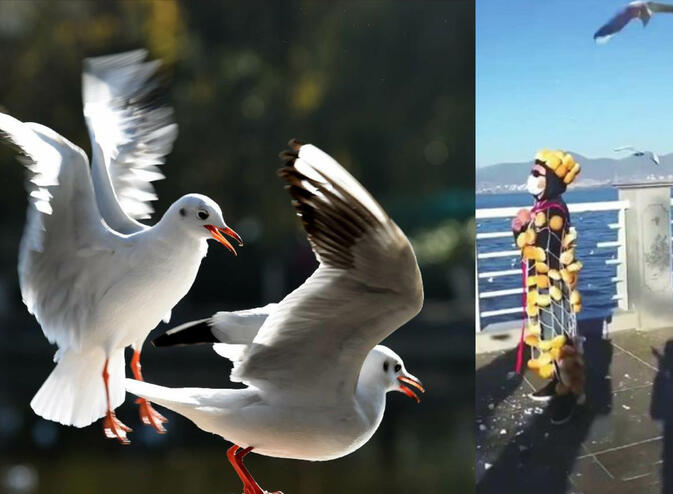 It just wouldn't be autumn in Kunming without a weird story about migrating Russian gulls. Luckily, someone always seems to step up their game, as one devoted man did more than a week ago when he wrapped himself in bread to attract the birds. Call it accidental performance art, a strange new fetish or a one-man flashmob. Call it whatever you'd like. But when the gulls wing into town, something unpredictable always pops up.

The event in question occurred on November 17 on Kunming's most famous walkway, Haigeng Dam (海埂大坝). Each year, tens of thousands of migrating gulls make the shores of Dianchi Lake (滇池) their home, congregating near the pedestrian street in order to snap up morsels handed out by locals and tourists eager to take pictures.

This year an enterprising young man sauntered across the dam carrying a large cardboard box. Upon reaching his chosen spot, he quietly began putting on a homemade, head-to-toe outfit created almost entirely out of string and bread. The man topped off the ensemble with a helmet made of what appear to be buns or dinner rolls.

The suit of bread attracted large number so gulls, which in turn attracted a crowd of people. Photos and video of the man began popping up on Chinese social media almost instantly, and a 15-minute celebrity was born. Online commenters have now taken to referring to the bun-clothed man as 'Brother Bread' (面包哥).

After throwing chunks of bread into the air and witnessing birds peck and otherwise summarily dismantle his cape and cap, Brother Bread conscientiously cleaned up whatever crumbs remained, spoke with reporters for a short time and then departed. According to the Daily Mail, the still-unidentified man told members of the media, "'I love seagulls and...just want to be with them".

The flocks of black-headed gulls first began migrating to Kunming in the mid-1980s from summer nesting grounds in Russia and Mongolia. The numbers wintering in the Spring City have continued to grow over the years, and their arrival at Dianchi Lake, Green Lake Park (翠湖公园) and the Western Hills is now considered to be the unofficial end of autumn by locals.

The birds not only signal the change of seasons, but also bring out some odd behavior. Last year a man was lambasted on social media after a video of him snatching a gull out of the air and breaking its wing went viral. And in 2014, well-meaning but possibly misguided municipal workers hosed down areas popular with the animals with a "guaranteed safe for birds and people" chlorine-based solution. The emergence of Brother Bread represents a marked upgrade.

Reading and reading... waiting for the Stephen-King-esque horror to unfold. Thanks Pat for click-baiting your followers. No entrails spillin' out this time. lol

For regular seagull feeders, bring your empty bags to 100 meters up South Gate of Green Lake to fill up on free gull food pellets (鸥粮) provided by the city government. Monday - Friday around 9am. The avian "man-eaters" will be waiting.

Yep. Thought my title was pretty tongue in cheek, a little click-baity, but done in fun for a generally silly story. :)

I thought he was going to be eaten, I guess i am pretty gull-able.

It's all fun and games until someone loses an eye.
That stunt seems dangerous to me and he is lucky a bird didn't swoop down and poke out one of his eyes.

That's why he is wearing sunglasses.