Report: Yunnan to have universal preschool education by 2020 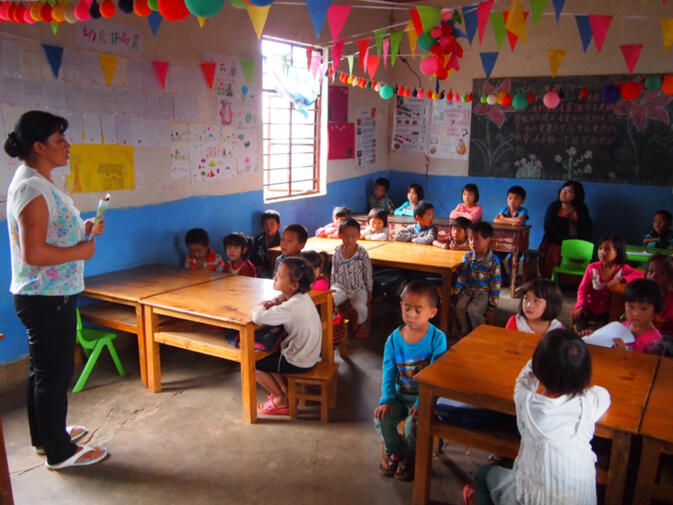 Yunnan as a whole is moving toward a future economy focused primarily on two things — tourism and emerging technologies. The latter will require a new generation of highly trained professionals. In an attempt to meet such demands — as well as bolster educational sophistication in general — the provincial government has issued an edict requiring towns, no matter how small, to provide kindergarten classes to all children by 2020.

A section of Yunnan's Twelfth Five-Year Plan — implemented in 2015 — outlines the need to make access to kindergarten a provincial priority. Official statistics show that over the past three years, total preschool enrollment across the province covered only 64 percent of all potential students. This level of registration and participation is 11 percent lower than the national average, and both rural teachers and children must often cope with deplorable conditions.

A new plan calls for the establishment of kindergarten facilities in all rural villages that currently lack them. The plan also includes sections of urban areas where children must currently be bused long distances to attend already crowded schools. In total, five billion yuan (US$759 million) is earmarked for the program, which planners expect to be completed by 2020.

Zhao Derong (赵德荣), deputy secretary of the Yunnan Education Bureau, outlined the policy — entitled the "Yunnan Preschool Education Achievement Plan" — at a meeting held June 14-15 in Weishan (巍山). He explained that the additional teachers required for the province-wide program will first be recruited on a volunteer basis.

As yet, no specific teacher qualification prerequisites have been made public. However, Zhao did elucidate the goal of having "at least two teachers and one nursery staff member" in each classroom by 2020. This aim, he said, will be facilitated by encouraging freshman attending Yunnan universities to pursue degrees in elementary education.

Some of the five billion in funds will be disbursed to existing preschools that accommodate students from underserved and far-flung rural areas. However, the bulk of the money will be used to accelerate the creation of new "countryside kindergartens". Some 2,083 of these have been built over the past year, and are teaching a standard curriculum once unavailable in rural schools. Additionally, an annual stipend of 300 yuan will be given to kindergarten students hailing from the province's poorest areas.

All sounds good. But the flip side to universal compulsory state-run education, in China and everywhere, is that the state wants you to turn over your kids to them, for longer & longer periods of time, so that they can be molded into members of The Nation - which is something that they, of course, are very interested in doing. Cf, for example, church education where it exists.
I'm not suggesting kids should be kept ignorant of the world they'll have to deal with, but it's still a global conundrum.

Right. Brainwash them while they're young.

Made a change, the pledge is to have 2 teachers and 1 nursery staff member in each class.

More preschools and more teachers always a good thing. Nothing wrong with a little nationalism and culture in todays's world. Free would be an amazing step forwards for a socialist country.

Just read the article about another murder in a Yunnan dormitory (GKM: under News Wire), now I read this and I can't help but feel concerned about the relationship between mental health and education. I'd like to see a long-term plan entitling children to a childhood.

@Michael: I think there's a lot wrong with nationalism in today's world. However, overall I agree that more preschools are good, and 'free' in a socialist country would not be an amazing step forward but would be what socialists are supposed to do. My point is just that the indoctrination is the downside, and requires more space for different opinions in the overall political/media/educational culture from which its shortsightedness may be counteracted, and on that score there's a long way to go.

Let us hope that pre-school curriculum is not just a preparation program for the mainstream curriculum. There would be so much scope to develop children's other intelligences, leading to more rounded individuals, who can better cope with the things life will throw at them. Just having more of the same, starting earlier, will only give you what you already have; which everyone admits needs improving.