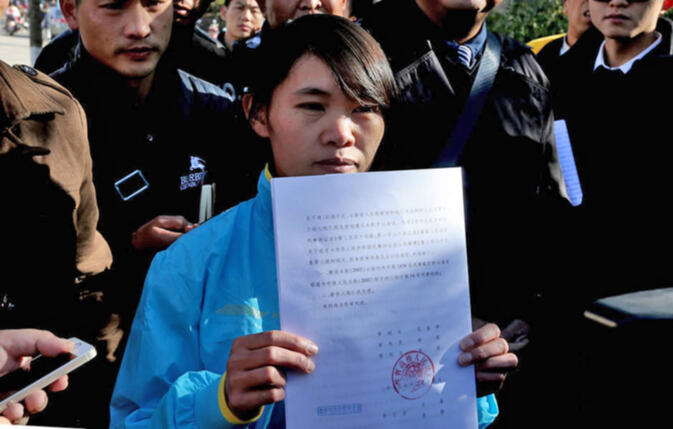 Freed from prison six months ago, a woman from Yunnan is seeking damages for wrongful imprisonment from the provincial government. Qian Renfeng (钱仁风) spent nearly half of her life behind bars for the murder of a two year-old, but was released in December 2015 after an appellate court threw out her conviction. She is asking for compensation totaling 9.55 million yuan.

Qian's lawyer, who is mentioned in online reports only by his surname, Yang, filed a compensation petition over the weekend. The document is wide-ranging in scope and, because it asks for the Yunnan government to admit wrongdoing publicly, is also quite bold. Not only is Qian asking to be paid a large amount of money, she is also demanding an apology from the province's highest court, which, according to her petition, "deprived her of her human rights". In addition, she is asking media outlets China Central Television, People's Daily and "any other mainstream news sources who reported on her conviction" to apologize publicly and retract their stories.

As if those requests were not daring enough, lawyer Yang and his client detailed how they came to a compensatory figure of nearly ten million yuan. Qian, they say, was incarcerated for 7.272 million minutes, and expects to be paid the sum of one yuan for each one. The remainder of her claim is made up of wages she theoretically would earned if not for the fact she was in prison for 13 years.

Qian was first arrested in 2002 while working as a nanny in northeast Yunnan's Qiaojia County (巧家县). Three children under four years of age were rushed to a local hospital after lunch while under Qian's care. One of them, a two year-old, died while receiving treatment. The other two recovered following prolonged stays in the hospital.

Prosecutors in the case portrayed Qian as a disgruntled employee who took out frustration with her boss by poisoning the three children. She was convicted of adding tetramine — an ingredient in rat poison banned in almost all countries outside of China — to the toddlers' milk powder. Because she was only seventeen at the time of her sentencing, Qian was spared the death penalty.

Following years of denied appeals, the Yunnan Provincial High Court agreed to review the evidence presented in her original case early last year. The tribunal then called for a retrial, which resulted in a judicial reversal that called into question almost all major points put forth by prosecutors during Qian's trial. She was released from prison on December 21, 2015.

Although Qian has already exhibited a penchant for beating long odds, her compensation petition faces an uphill battle. Not only is she going about the process in an extremely public manner, she is also appealing to the very court that once sentenced her to life imprisonment.

Yet another argument against the death penalty.

Yep, plenty of dead innocent people all around the world no doubt.

Does anyone know who poisened the baby?
As much as the article said, it still isn't clear who is the murderer.
Why exactly was she pardoned? Any new suspects or evidence?

@The Dudeson's Absolutely right. When writing this article I came up against the same questions. All of the sources i found never mention alternate suspects, theories or a continuing investigation into the poisonings.

As to why Qian was exonerated, it seems a forced confession and several other legal missteps by police paved the way. See here: www.gokunming.com/[...]

Not sure I like the tone of the article or the comments. Is GoKunming trying to reconvict her?

It is impressive that she thinks she can sue and win.

It is politically important that she makes the attempt, openly, and it takes guts to do so.

As to tone, I am impressed she is publicly challenging the high court, while my previous comment was meant to highlight how it seems very odd both the police and media have forgotten to mention re-opening the case. That is a very large oversight now that Qian has been exonerated.

Sorry, I misread the talk of police missteps as implying she had got off on a technicality. Actually, I don't find it at all odd when the local police and media don't announce things. They may well be re-investigating, insofar as they can with such an old case. There's also the possibility it wasn't a murder at all but an accident.

@scally
The article is great and thanks for putting it back into the view of the public. Yeah that girl and her lawyer, really have balls, to go against the people convicting her.

But these people don't like to be messed with. They will probably put her against bars again.

But I hope they also try to find the murderer, otherwise there is still a babykiller on the loose. See Steven Avery.

Props to her lawyer for being able to secure a retrial and getting her exonerated. Also, I am impressed that the Yunnan High Court chose a 17 year old (at time) housekeeper from a poor background over local police and prosecutors. Too bad her civil suit has to go to the court that wrongly convicted her.

The original case would be over ten years old now. That's a lifetime ago at China pace. Very unlikely they kept DNA evidence and since they did an all out effort on her, probably very little other suspects questioned or witness statements.

I am happy to see someone released. A much better story than reading about someone wrongly convicted and wrongly executed.

of course this incident is not tragic enough to warrant banning this substance.

From what I have read, tetramine is banned in China but is manufactured illegally and widely used in the countryside. It has been used in many deliberate mass poisonings, often the result of business disputes, and has been responsible for accidental deaths.

See this link (which is quite scary)
ciitn.missouri.edu/[...]

The authorities have made some efforts to stamp it out - see below - but as usual the problem is enforcement.