A trip to Yunnan's Jurassic Park Just 80 kilometers west of Kunming, near the city of Lufeng (禄丰), lies China's more or less hidden Dinosaur Valley (恐龙谷). Since the first discovery of dinosaur bones by farmers in 1938, 150 fully intact skeletons, and a plethora of single bones, have been unearthed with the help of Chinese and foreign specialists often assisted by the local community. Among the uncovered bones, the eponymous Lufengosaurus, was first discovered in the area.

Since 2008, the self-proclaimed 'World Dinosaur Valley' has been open to the public. The local government saw an opportunity to attract tourists to an otherwise unappealing area and develop the valley as a sightseeing spot. As a result, today there is a fantastic, well-maintained, although quirky museum, and a decrepit-beyond-its-years dinosaur theme park. We decided to check it out. After a quite adventurous bus trip on a pothole-riddled street to the dinosaur valley from the city of Lufeng, we were greeted by a gigantic Hollywood-esque sign on one of the hills. Entering the parking lot, we were impressed by the architecture. The whole entrance area gives away a feeling of grandness. Classical music played in the background and we could occasionally hear a roar, of what we supposed was a dinosaur.

When we approached the enormous pillars at the end of the entrance area, we saw engraved pictures of the huge variety of dinosaurs that had been excavated from the valley. Unfortunately, the initial impression of wonder didn't last long. Getting closer to the ticket booth, we were confronted by huge, comical looking plastic dinosaurs. Back in 2008, they must have looked impressive, but time hasn't been kind to them — paint was peeling off and some of the smaller parts were missing. 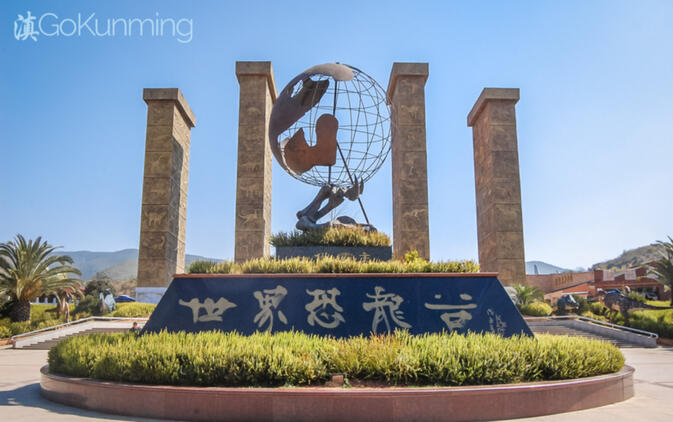 The actual entrance to the park seems to come directly out of one of the Jurassic Park movies. It looked a bit run down again, with paint coming off the statues and the walls seemingly missing some structural parts. But despite the minor cosmetic flaws, the level of detail was impressive and gave the upcoming sites some creditability.

Entering the park, we are given the option to hop on an electric car that would drop us off at each destination. While driving to our next stop, it was a nice touch to learn about various types of dinosaurs along the way. Some are hidden behind trees, while others are out in the open. The kids in the car especially seemed to enjoy it, and even some parents looked intrigued at their kids' discovery. 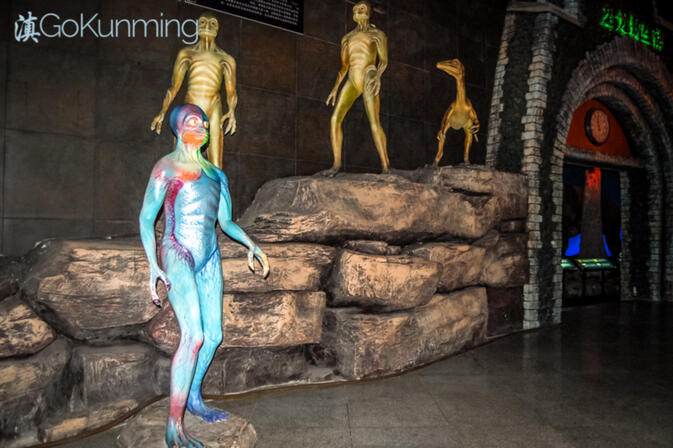 Roughly three minutes and at least one sighting of a triceratops later — which launched some of the kids into an excited conversation — we arrived at the museum complex. The museum is divided into two separate buildings. The first building is dedicated to the history of Dinosaur Valley, while the other wing serves as an exhibition room for the fossils. The latter has English exhibit descriptions, while the former is completely written in Chinese. Without some Chinese proficiency, visitors are going to miss out on quite a lot of trivia and interesting facts. This is especially true when it comes to the quirky and bizarre stuff that can be found inside the first building.

It took us a while to figure out what exactly was standing there in front of us. Our first guess was, somehow, someone misplaced a couple of old Star Trek lizardmen figurines. Taking a longer and closer look at the description of this particular exhibit, it was revealed it was a meditation on the possible evolution of humans from dinosaurs! This was definitely a first for us. After strolling around a bit more, and watching a movie about the extinction of the dinosaurs, we left the building to finally come to the main attraction of the park. 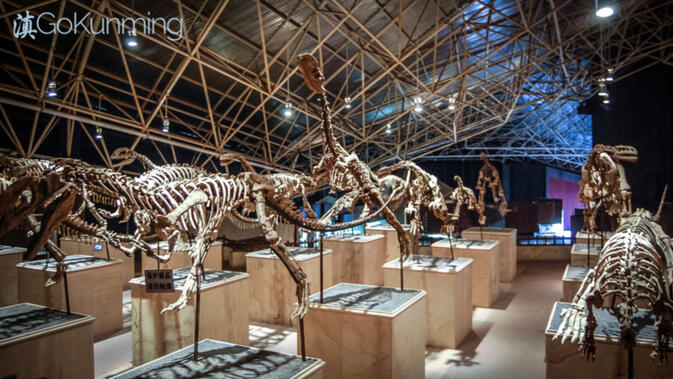 First off, we were amazed by the level of detail and the preservation of the dinosaur fossils. In some museums around the world, you can only occasionally see a fully intact dinosaur skeleton or two, but here you can see dozens of them, crowded together in various poses. Walking among the Lufengosaurs in the dim light of the museum, an eerie feeling over came us and left us wondering about life millions of years ago.

At the end of the museum is a small display of the actual excavation site. It is particularly interesting to see the fossils that remain partially buried. It made us realize just how much work it is to unearth and preserve an entire dinosaur skeleton. Also in this area of the building is a unique little display where visitors can touch an actual dinosaur bone.

After awhile, looking at dinosaur remains got exhausting. At the entrance gate, we had seen advertisements for a restaurant in the park. Searching for it and asking around, we were informed by a friendly electric car driver that the restaurant closed down a couple of months ago. Starving, we settled for snacks and some reheated noodles we found at a kiosk. 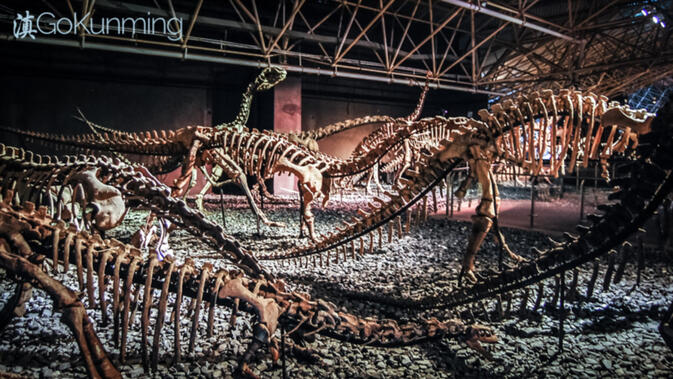 After a more or less satisfying lunch, we went back to the electric car stop and headed to the next site. Unfortunately everything after the museum is not really worth talking about. Every other attraction seemed to be closed. For example, at an area called 'Dinosaur Waterfall' at the far end of the park, patrons are supposed to be able to raft their way back to the entrance. Looking at the sun-stained and cracked plastic boats, we got the feeling no one had done it for a long time.

Before we could leave the park, we were redirected to 'Dinosaur Laboratory' by an old woman who made sure no one left through the main entrance. The sign definitely didn't raise any expectations. Everything inside this sad little amusement park — except the merry-go-round — looked entirely unsafe to ride. 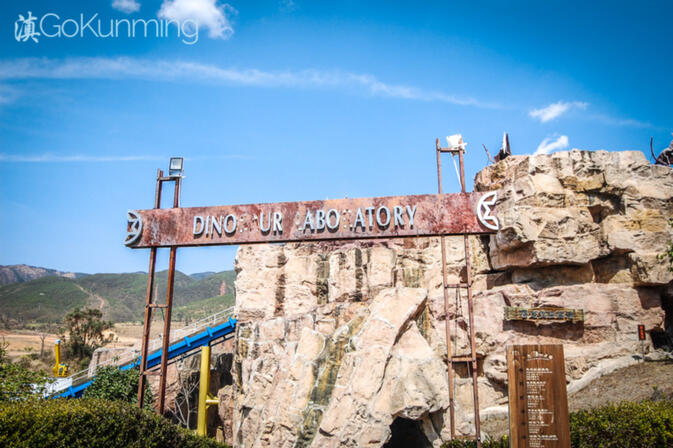 However, the merry-go-round was a small highlight before we decided to leave the park. We rode back to Lufeng, before catching the last bus back to Kunming. All in all, despite some of the park's sillier attractions, it was a good day.

Overall the park was an enjoyable experience. It takes quite a while to get there from Kunming without a car, but it is still a very manageable day trip. Small kids will enjoy all of the plastic dinosaurs and weird movies available the park's two cinemas. Meanwhile, for adults, the fossil museum is certainly enough of a reason to go to Lufeng and see its Dinosaur Valley. Take a bus from Kunming's West Bus Station to reach Lufeng — one-way tickets cost 36 yuan and the trip takes about one-and-a-half hours. From Lufeng's bus station hop on to a small bus headed to Dinosaur Valley. The ride takes about 40 minutes and a ticket is 12 yuan. The last return bus from Lufeng to Kunming leaves at 5:30pm, so you have to leave the park by 4:30pm in order to have enough time to make it back to Kunming the same day

The entrance fee to the Dinosaur park is 120 yuan. Even though it isn't explicit stated, the park grants a student discount with the presentation of a valid ID. Electric car rides cost another 20 yuan. Amusement park rides each cost 10 yuan.

If you are interested in visiting Lufeng, or anywhere in Yunnan, Kunming-based tour operator Wonders Of Yunnan Travel provides rental cars with drivers, hotel bookings, all sorts of travel related services and other valuable tourism information. Please get in touch directly for further details. 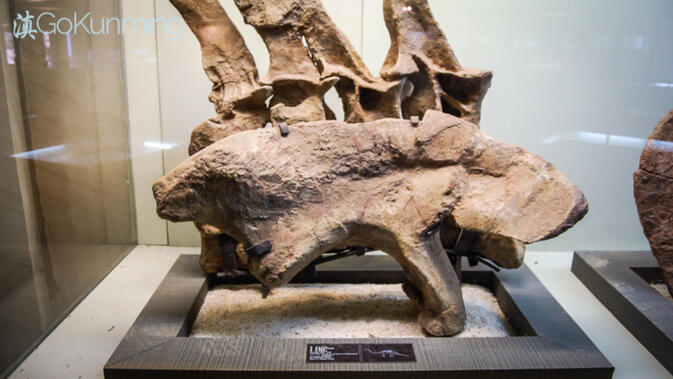 Not cheap considering how run-down it is, especially when you add in transports costs. Still tempted to visit though.

Is it privately run or is the government responsible?

It is worth noting that the park is makes a decent place to stop along the tollway from Kunming to Dali if you are self driving and doesn't require going down the potholed road into LuFeng town.

Having seen the park in full operation though, you don't miss much by most things being closed. Growing up facinated with dinosaurs though, the museum was worthwhile even if it more or less only has Lufengosaurs' on display.

I went there a couple of years ago for a school trip. The dinosaur part was lacklustre to say the least, though it could have improved since then. The fairground rides however were a lot of fun and we ended up spending hours on them. Go for a trip but don't expect too much on the dinosaur side of things. A fun day out can be had on the rides alone!

"Back in 2008, they must have looked impressive, but time hasn't been kind to them — paint was peeling off and some of the smaller parts were missing."

Plenty other things going through this same quick ageing process. Fancy housing complexes - built just a decade ago - already start to look like a gone era great leap projects. Paint falling off and what not else. Cant wait to see how all looks 5 years further.

When you take the Dali motorway you pass through the Dino Valley. Some clever entrepreneurs at the local petrol station created their own "Dino Museum" full of plastic dinoos. Most copied from Disney movies. The "Real thing" is just behind it.

Those dinosaur skeletons are not real, I am sorry. Maybe a couple bones are, at best. And all those workers you see brushing off bones with brushes are just park employees in lab coats. Come on.

I think museum displays of dinosaurs almost everywhere are partly built of real petrified bones and partly by artificial parts made according to what is known about the type of dinosaur in the display from remains found elsewhere. However, I know nothing of the specific displays under discussion.

@Alien you are absolutely correct. the displays here should not be promoted as being 100% real. They may not even contain one real fossil for all obe knows.

Come on, that blue dude in the 4th picture is real