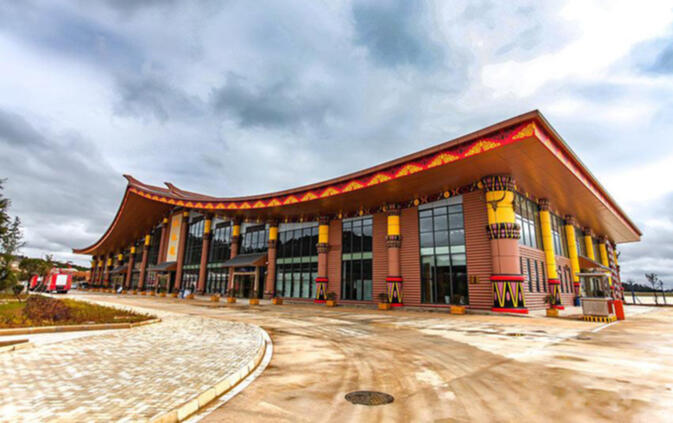 The province's newest airport opened last week, once again reinforcing the point that in Yunnan, no area, no matter how remote, is off limits from infrastructure development. The initial test phase for Ninglang Lugu Lake Airport (宁蒗泸沽湖机场) passed without event following opening ceremonies. Limited flight service is now underway, as are looming development projects associated with the airport.

Lugu Lake lies 200 kilometers northeast of Lijiang and straddles the border with Sichuan. Until now, getting there had been a bit of a trial due to a relative lack of road infrastructure. Lugu Lake Airport should change that. Built at a cost of 1.298 billion yuan, the airport sits perched atop Shifo Mountain (石佛山) at the lofty elevation of 3,293 meters above sea level. It is the highest altitude airport in Yunnan and seventeenth highest in the world. It is also a bit far removed from the nearest major tourism magnet.

However, that distance, according to news reports, was largely the point. The new airport is roughly 25 kilometers south of the lakeshore. The area near Lugu's new terminal will soon be encircled by all manner of businesses, tourist attractions and housing developments. For the time being, construction of "large scale tourism projects are not allowed" beside the lake in an attempt to keep its waters and overall ambience intact.

Once up and running at projected capacity Lugu Lake Airport is expected to receive 450,000 passengers each year. Numbers of this magnitude far outstrip the current capacity of nearby hotels, guesthouses and dining facilities, to say nothing of the corresponding markets, trinket shops and general utility infrastructure needed to accommodate so many travelers.

To alleviate such demands, several projects associated with the airport are currently planned or under construction. They include boutique hotels, a "Tibetan cultural experience center", luxury villas and the somewhat ominously named Mosuo Paradise International Resort.

The Mosuo (摩梭) people are, in fact, as much of a draw for domestic tourists as the alpine lake and its surrounding scenery. Officially recognized as a subset of the Naxi (纳西), the Mosuo are known throughout China for their 'walking marriages'. This cultural tradition centers around couples never formally being pronounced man and wife. Instead, women typically choose who their sexual partners are and how long a given relationship lasts.

Traditions such as these have led to increasing numbers of curious tourists visiting the Lugu Lake area. The new airport, coupled with nearby development projects expected to cost in the neighborhood of 1.4 billion yuan (US$221 million), should make those number rise significantly. However, as of this writing, Ninglang Lugu Lake Airport is only receiving flights four times weekly, and so far only from Kunming. Departures and arrivals occur on Monday, Wednesday, Friday and Sunday with flights lasting one hour. More destinations are expected to be added soon.

The new airport is roughly 25 kilometers south of the lakeshore - Those nasty taxi drivers are sure going to make a killing. Of course, they will NOT use the meter.

Problem is the nature of tourism in any society where peoples' performance-lifestyles are created as commodities.

Look like it's high time to visit that lovely place before it gets completely commercialized and crowded with loads of tourists...

Bail - If you go to Lugu Lake please let us all know the price of plane tickets and how you get from the airport to the lake please.

Bail - You are already to late. The Lugu Lake area is already completely commercialized.

Having contacted Lugu Lake government portals on WeChat and verified again by telephone, they now officially accept foreign travelers. On paper, they denied entry of foreigners a while back due to the pandemic.

One-way direct flight from Kunming to Lugu Lake via Lucky Air ranges from $220 to $290 (excluding $50 airport taxes) depending on dates. Airport buses to lake bus terminal cost $30/pax, approximately an one hour duration. Other cities that could fly to Lugu Lake besides Kunming are Chongqing and Chengdu.

Lake sightseeing buses that drive around the entire lake, which starts in Yunnan and crosses over to Sichuan Province and back, takes a total of four hours. 2/3 of lake is supposedly in the territory of Sichuan, 1/3 in Yunnan (the more scenic). Two daily departure bus times, once in the morning and once at noon. $60/pax for two-day all-you-can-ride scenic bus pass.

Lugu Lake buses to Lijiang takes approximately four hours, halving the driving time in the past due to new roads.

You use the dollar sign '$'. Do you mean US Dollars or did you mean RMB/CNY?