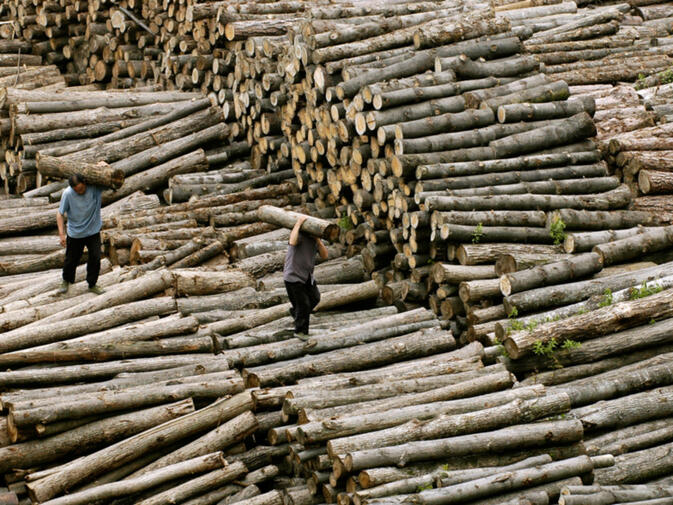 A Burmese court has sentenced 153 Chinese nationals to life in prison after convicting all defendants of illegal logging. The decision, first made public July 22, has sparked stern diplomatic protest from the Chinese government and Beijing is now urging Naypyidaw to reconsider and reverse the rulings.

A court in Myitkyina, capital of Kachin State in northeastern Myanmar, handed down 155 sentences, two of which convicted minors and ordered them to serve ten years in prison. The other 153 Chinese citizens were given life sentences, which in Myanmar equates to 20-years of prison time.

The individuals were first arrested in January 2015, following a crackdown on what is believed to be one of the largest illegal logging rings in Myanmar. Joint action by the Burmese military, police and forestry departments led to the seizure of 400 vehicles and 1,600 logs during the raid. An undisclosed number of Burmese citizens were also arrested. Aye Mint Maug, Deputy Minister of the Environment, explained to the Burmese parliament in June that an additional 10,000 tons of illegal timber had been seized from loggers since the crackdown began.

Under a 1963 Burmese law, any person "caught stealing or abusing public property" must be given a minimum punishment of ten years in prison. Myint Swe, a Kachin State magistrate working on the case, thus explained that although "we tried to make the sentences as fair as possible, [...] we had to consider the environmental point of view." ( RFA)

The Chinese government, however, disagrees vehemently with the Myitkyina court decision. Despite the possibility of an appeal in the next 60 days, several high-ranking Chinese officials, including the ambassador to Myanmar, strenuously objected to the ruling, saying the defendants had been "tricked" into illegally cutting down trees. Lu Kang, a spokesperson for the Chinese Foreign Ministry, also issued a statement reading, in part, "We ask the Myanmar side to take China's concerns seriously, take all the factors into account and properly handle this case."

Nearly a week after the court first issued its rulings, the government of Myanmar remains largely mum on the issue. The administration of President Thein Sein has grown increasingly bold over the past few years in rebuffing Chinese dictates. In addition to this most recent cross-border kerfuffle, Myanmar in 2014 cancelled a costly railway infrastructure project funded by Chinese investors and has aligned itself more closely with Western countries — most notably the United States and England.

The one-time pariah state is scheduled to hold elections at the end of this year, with analysts both inside and outside the country expecting a ruling party defeat. Sentencing Chinese nationals to prison may be a way for Thein Sein to shore up waning public support for his Union Solidarity and Development Party, as much of the Burmese electorate is angered by vast resource depletion — including the near-extinction of some tree species — blamed largely on China.

if hundreds of burmese loggers were working illegally in yunnan and illegally logging, then what?

China is personalizing this. It's about the 'crime' stupid people not about nationality. Assholes!

Serves the bastard right! Hope they stay locked up for at least the period they were convicted for.

For those interested in some extra thoughts about this matter: www.eastbysoutheast.com/[...]

Nah, according to todays news the loggers have been pardoned. This was in a group of 6966 pardoned criminals. Anyone familiar with burmese culture knows that a number like that is not drawn from the hat, but its an astrologer that came up with it. Or someone in trance flipped it out during a nat pwe.

China shall be thankful to burmese astrologers.

Well, that didn't last particularly long. President Thein Sein pardoned 7,000 prisoners held in Myanmar, including all of the convicted loggers. They were processed through Burmese immigration today: