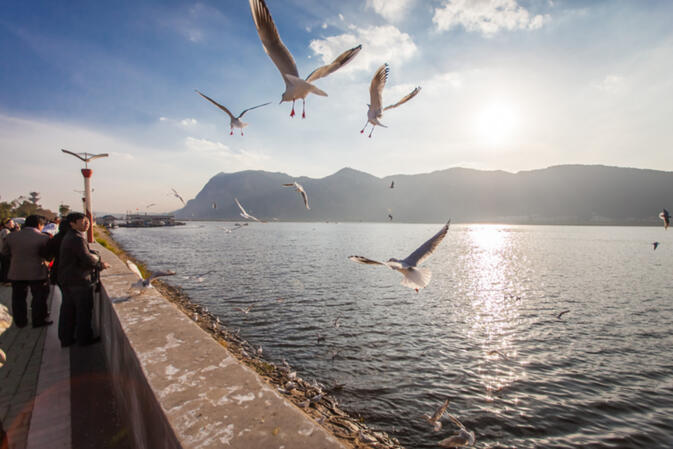 Each year in winter, thousands of gulls descend on Kunming during their migration south from Siberia. This year many of the birds arrived a bit earlier than usual, giving photographers, scientists and urban management crews an unexpectedly early start to their yearly gull-oriented activities.

The black-headed gulls, known scientifically as Chroicocephalus ridibundus, first began flocking to Green Lake Park and Kunming's Western Hills in 1985, according to local media reports. They have become something of a community phenomenon ever since, and each year thousands of people gather to feed them and snap pictures as the gulls hover in the air around them.

Besides providing a seasonal tourist attraction, the birds' arrival gives researchers a chance to examine the overall health of the flock and tease out the specifics regarding southern migration patterns. Already this year, an interdisciplinary team of scientists and volunteers from the Kunming Institute of Zoology, the Kunming Bird Society, Southwest Forestry University and Yunnan Agricultural University captured more than 100 gulls at Haigeng Park and the adjacent promenade overlooking Dianchi Lake.

Researchers weighed and measured the birds, took blood samples and attached plastic tracking bands to the right leg of each gull. By 'banding' the birds, ornithologists are attempting to better track their movements and habits as they fly from summer breeding grounds in Russia to warmer winter climes along the Southeast Asian coast.

Information gathered through banding and possible subsequent recaptures is then sent to a national research center in Beijing where it can be combined with data collected elsewhere in China. Of particular interest to researchers is the physical state of the birds. Such long migratory routes and stops in so many climates mean black-headed gulls can be susceptible to avian strains of influenza. Although no illness has yet been identified, blood samples taken from the captured birds will be analyzed in hopes of spotting any early warning signs of an outbreak before it could potentially become widespread.

In addition to curious onlookers and probing scientists, the newly arrived gulls were greeted by city cleaning crews. Workers sprayed a "guaranteed safe for birds and people" chlorine-based solution all along the promenade and also scrubbed light posts and other man-made edifices upon which the gulls might roost.

The cleaning, carried out by a private company, was financed by a 78,000 yuan "Seagull Protection Fund" established this year by the government of Xishan District. The purpose of the fund is to ensure visiting gulls and tourists alike have access to "a clean habitat and healthy winter" while in Kunming.

If they think that a bit of chlorine is going to prevent bird flu, they are very naive. People are also very naive to deliberately come into contact with these birds through feeding them etc, though I have to say their naivety is quite endearing.

So now add birds to the long list of things that we shouldn't have any contact with.

Not a good idea to have contact with any animals bar the domesticated ones, obviously

@Haali: when this becomes the case, we can see how the modern world is all screwed up.

If feeding the birds is your thing, just buy a PM2.5 mask on taobao and you can feed the birds with a high degree of safety, provide you wash your hands after you do it as well.

No reason to throw the "birds" out with the dirty water.

Siberian seagulls have returned. Here's a historic picture of their first arrival in Kunming:

For those like @Geezer and @alien who are nostalgic of the old, here are 100 more pictures of Kunming in the 80's:

@GoK ought to keep these pictures for future use.

@bilingualexpat Thanks. My first trip into China was in 1984. Didn't get to Kunming in those days and probably wasn't allowed to go. Today's Chinese kids should see these photos. I am fortunate to have witnessed China's progress over 30 years.