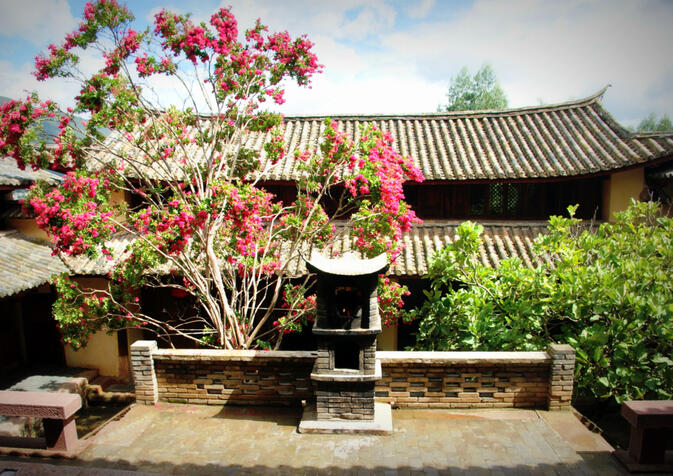 Editor's note: The following story is taken from an inscription contained inside Ciyin Temple (慈荫庵) in Shaxi. The temple has recently undergone a major makeover headed by entrepreneur Chris Barclay, who is also a managing partner at the Old Theatre Inn. Ciyin Temple is now a multi-purpose community and visitor center renamed Pear Orchard Temple (慈荫庵). The tale is an amalgam of history and local folklore, sometimes written in the first person. It was translated into English by Li Hanmei, a mountain guide and chef at the temple.

On Buddhism and Shaxi

Buddhism first arrived in China during the reign of Emperor Han Ming (汉明帝). But it was not until a few hundred years later, when the Indian missionary Bodhidarma traveled to China that the religion spread across the country. Wherever Bodhidarma went, he gathered great numbers of followers, won over by the ideas of karma, the will of the universe, fate and destiny — the belief that good will be rewarded in heaven and that evil will suffer in hell after death, and that one can seek one's true nature by clearing the mind of everyday distractions.

At first there were no religious books or scriptures available to Chinese Buddhists. People had to learn the teachings by heart and transmit them by word of mouth. The faithful built many temples, but the practice of making statues of deities only appeared during the Jin Dynasty. From then on, it developed into the standard temple art form now seen everywhere in China. 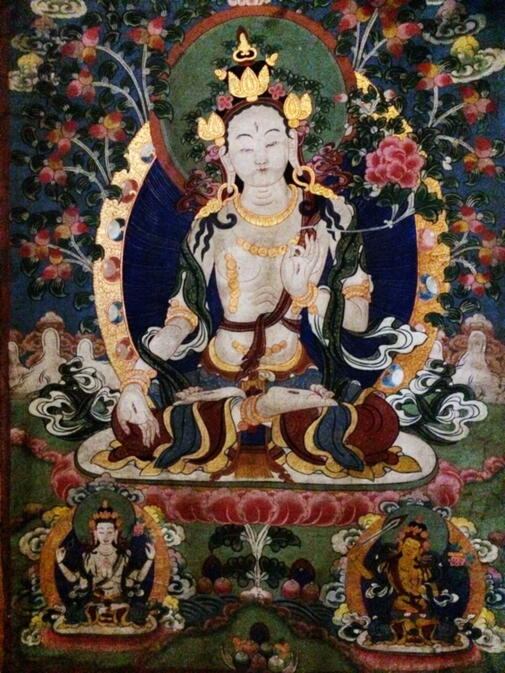 In the Tang Dynasty, the valley of Shaxi was flooded and became part of the river bed of the great Yangtze River — the third longest river in the world, which flows for 6,300 kilometers through 11 modern-day Chinese provinces. At some point the river was blocked upstream by unknown geological events, and its course was diverted.

Half of Shaxi remained covered in water, and the valley was left uninhabited for ages. The southern part of the valley eroded into a flat, low plain. As time passed, the waters receded and land reappeared. Eventually, during the Ming Dynasty, a small group of people originally from Henan settled in the area. These first inhabitants named their settlement Diantou (甸头村), which simply means 'The spot at the head of the valley'.

Thanks to the influence of Bodhidharma and his teachings, it became the custom that wherever there was a village, there must be a temple. Wherever there was a temple there was a need to create statues of the various deities, who varied from village to village. The temple in Shaxi was relocated three times before being rebuilt at its current location. 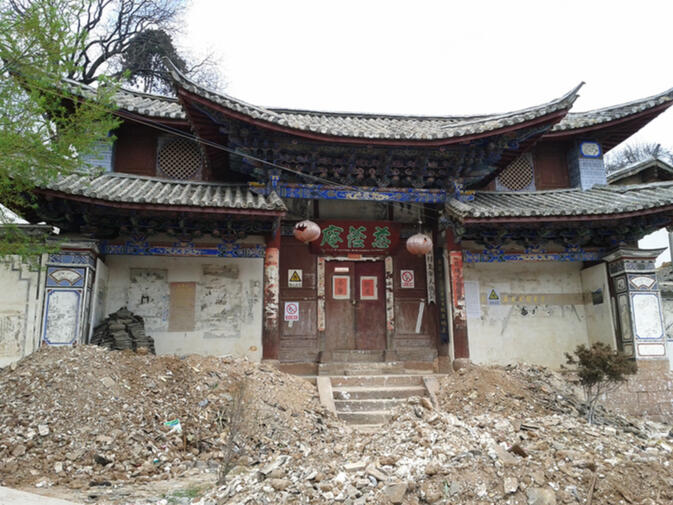 Peach Orchard Temple during its renovation

Looking at the outline of the Bell Mountains that surround the valley one cannot help imagining them as a peaceful green dragon, whose spirit guards the villages to the west as he gazes north. The dragon keeps the water flowing and the forests green, preserving the beauty of Shaxi's mini-paradise.

The current temple was built in the late Qing Dynasty and is dedicated to the Bodhisattva Guanyin, Goddess of Compassion, whose statue is in the central position of the main hall. To the right is the Big Black Sky God, a local deity of the Bai people, and to the left is Bodhidarma. The temple attracted many pilgrims and the local populace raised funds for a community of nuns to maintain the temple and conduct religious ceremonies.

The nunnery is close to Taibai Mountain (太白), with the Tianyan (天颜) hills to the north, facing the jade pagoda to the south with the river visible in the distance. At night, villagers would fall asleep to the sound of the ancient bell's muffled tolling. On religious festival days the whole village would be full of music as people celebrated. It was like stepping into an enchanted realm. 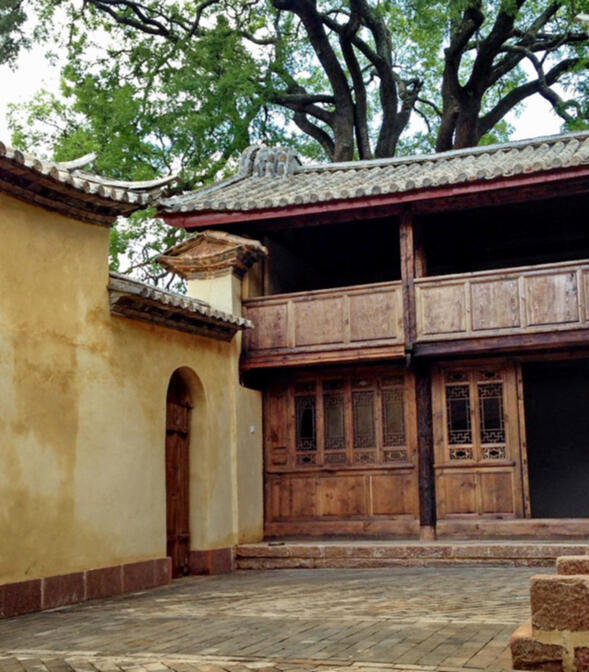 Travelers who stopped by to enjoy the beauty of the old nunnery were assured of a welcome from the head nun, a kind soul who always left the door wide open. Once, an elderly man arrived carrying statues of the Jade Emperor. He told the head nun he needed a bed for the night but had to leave early the next morning to deal with an urgent matter. He asked if he could leave the statues in her safekeeping.

But after he left he was never seen again. The nun thought to herself that it was the Jade Emperor himself who had visited the nunnery. Believing it must be the will of heaven, she decided to build a permanent shrine to the Jade Emperor.

She called a meeting of all the villagers to discuss the project and everyone agreed to support it wholeheartedly. The rich donated money, the poor people donated their labor, and they completed the temple in less than six months. The shrine was consecrated to the Jade Emperor in 1917, and on that day everyone from the area came to pay their respects and celebrate. They planted holy pines all around it so that it became a kind of heavenly place. I was well educated from a young age, and now I am an old man. I still come here from time to time to enjoy the peaceful atmosphere. But in my youth, before anyone knew it, the Cultural Revolution broke out. People were scared and confused and took leave of their senses. The nuns disappeared. Some returned to their families or married. The nunnery was left in a derelict state. People smashed the windows, tore down walls, and threw the statue gods into the street. Finally someone set the temple on fire and everything was destroyed.

On the night of the fire, some outlaws planned to steal the statue of the Jade Emperor because it was made of gold, thinking no one would dare to stop them. I was outraged, and together with my older brother went to the temple after midnight and took the statue back to our house. It remained hidden there for more than 40 years. We did not even tell our parents about it. Years later, when I heard at a government meeting that the policy towards religion was changing and people would be free to worship again, we decided to rebuild the temple.

Once the news spread, a group of village elders met to discuss how to go about reconstructing the village temple. Everyone agreed it was a good idea so we approached the rest of the villagers. Every family gave us strong support, so we started to collect donations, find laborers and choose an auspicious date to start work. We restored the Guanyin Hall first, then repaired the Hall of the Jade Emperor. Finally, of course, we had to consider replacing the missing statue of the Jade Emperor. We decided to wait until after the rice harvest and stage a grand opening to coincide with the harvest festival. 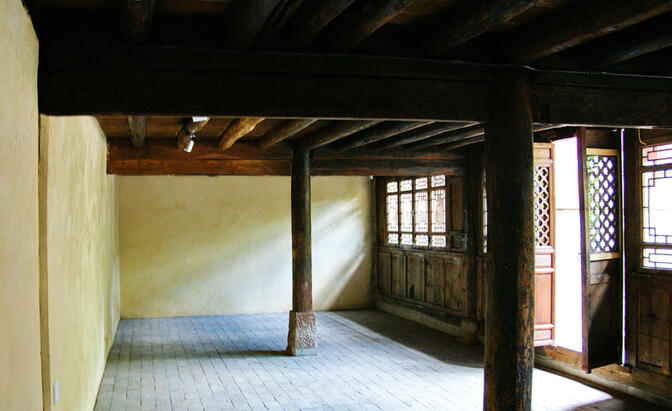 I told everyone not to worry about the statue of the Jade Emperor, saying I would make a statue myself and bring it to the grand opening. As the time drew nearer my friends kept asking me when I was going to finish the work. I told them not to worry, and when the day arrived, I went to the temple very early in the morning before anyone was up and about, and carried the emperor back to his temple.

The opening day went really well. My long years of waiting were over and my wishes had come true. I was a happy man again. But less than six months later, I was thrown into shock and despair when someone stole the golden statue. We never found out who did it, so we had to replace the original with a copy made of clay. I just had to accept how things had turned out, but it was a terrible loss.

Because our temple is located in the main village in Shaxi, it attracts many curious travelers who visit nearby Shibao Mountain. So we put a great deal of effort into maintaining its structure and appearance. We will always value and protect this sacred place and maintain our faith in the gods. The local people here are devoted and generous and are always willing to work hard to help each other and all the people who pass by. 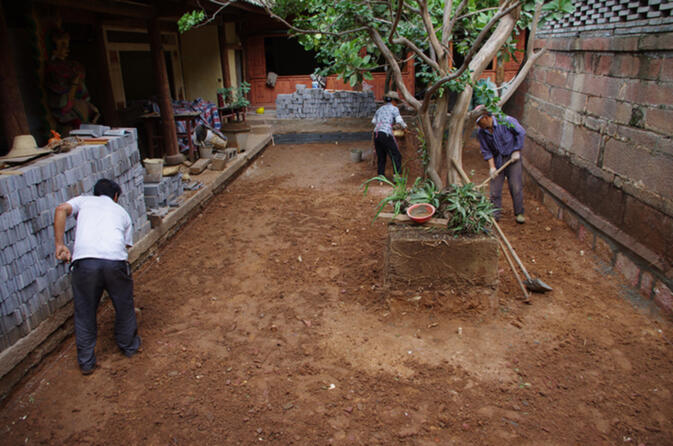 From Shaxi Old Town, drive north two kilometers toward Jianchuan on the main valley road until reaching the village of Diantou. The temple is off the road to the left at the north end of the village. If coming from Jianchuan, as you descend into Shaxi valley, you will see a big sign for Diantou, the first village on the right side of the road. The temple is 100 meters past the village sign, immediately on the right. The stone tablet containing the story of Buddhism, Shaxi and Ciyin Temple

Tantric Buddhism has actually been very prevalent in Shaxi area (azhali) - (and even to a degree still is). This is a vajrayana lineage. A mystic Buddhism.

The article mentions Big Black Sky God. This is a tantric deity - not only Bai - and called Mahakala. Its not only a Bai deity, but in fact an incarnation of Shiva.

The Swiss team that was involved in the Shaxi Rehabilition Project was not involved in the restoration of this temple near Shaxi. It's actually Chris Barclay (who provided the pictures for the article) who worked with local government and villagers to renovate and preserve this temple.