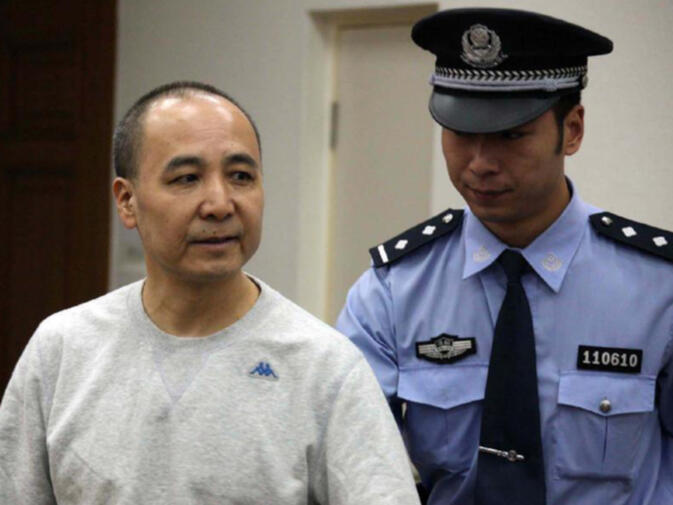 A one-time Yunnan official is the latest casualty as China descends ever deeper down the rabbit hole of its corruption purge. Wen Qingliang (闻清良), former head of the Kunming Railway Bureau, has been found guilty of accepting bribes by a Beijing court. His initial death penalty sentence has been commuted, meaning Wen will most likely spend the rest of his life in prison.

On August 20, the Second Beijing Intermediate People's Court found Wen guilty of "provid[ing] favors to companies bidding on railway projects" in exchange for money, according to state-run media outlet Xinhua. In total, Wen received 20 million yuan (US$3.25 million) in bribes from 2005 to 2011 while working in the railway industry in Shanxi and Yunnan.

His death sentence was almost immediately commuted by the court to life in prison — contingent on at least two years of time served with "good behavior". The easing of Wen's punishment reportedly stemmed from his cooperation in retrieving the majority of his ill-begotten wealth and turning it over to prosecutors. In addition to his prison sentence, Wen was stripped of his Party membership and ordered to forfeit all personal property.

Wen's legal troubles began in 2011, when he was officially dismissed from his position at the Kunming Railway Bureau for "disciplinary violations". The following year he was held by authorities in Kunming and remained in police detention until indicted on bribery charges in September 2013.

Before receiving his post in Kunming, Wen was deputy secretary of the Taiyuan Railway Bureau in his native Shanxi province. It was while he held this office that his bribe-taking began, apparently with the aid of his mistress, Zhong Hua (钟华). She is currently facing charges similar to Wen's in a separate court case.

Wen is the most recent high-profile bureaucrat to be caught up in President Xi Jinping's sweeping effort to "swat flies" and "hunt tigers" (拍苍蝇打老虎) — an odd turn of phrase that has become synonymous with China's crackdown on official corruption. More than 480 civil servants across the country have been similarly prosecuted in a drive begun by Xi more than 18 months ago.

Perhaps the most infamous official so far "swatted" is Liu Zhijun (刘志军), one-time head of China's Ministry of Railroads. Liu was accused of accepting a somewhat astonishing 380 homes and apartments worth 800 million yuan (US$130 million), as well as millions in cash and other gifts, in exchange for political favors over a 25-year span. He, like Wen, was given a commuted death sentence.

Well, it's good they decided not to kill him anyway.

Is Kappa the official supplier of Chinese prison uniforms?