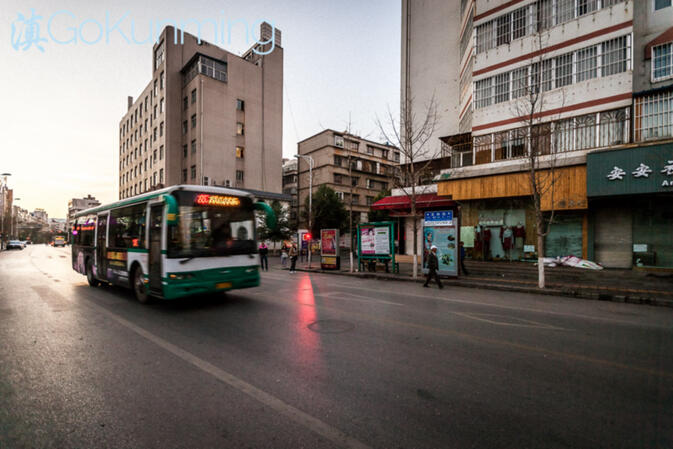 Four masked men riding two scooters were confronted by an officer in an unmarked police car on Wenlin Jie Tuesday morning, China Police Net reports. The policeman fired two shots before the suspects escaped, but authorities say no one was hurt in the incident.

The suspects, wearing black clothing and black masks, arrived near 150 Wenlin Jie and began to pry at locks on roadside e-bikes at 11am. Upon being discovered, the men reportedly fled down Fuyong Dao on scooters, pursued closely by a black Volkswagen Santana. The car followed the suspects into a closed alleyway and crashed into a gate, trapping one of the escaping bikes. Local media are reporting the masked men then used "one-meter-long machetes" to smash the Santana's driver-side windows, although an eyewitness who wished to remain anonymous told GoKunming the men instead wielded "a sledgehammer and a pair of pliers".

A shot was fired from the car by the driver, a police officer named Chen Yandan. The two suspects waylaid by Chen righted their scooter and rode back up to Wenlin Jie, pursued on foot by the officer.

"As the scooter continued down Wenlin Jie at about 40 kilometers an hour, the Line 1 bus suddenly drove up on the other side[...]The bike switched lanes to pass behind the bus on the far side of the road," a witness told Taihai Net. Bystanders then heard a shot and saw the glass crack in the bus's rear window, according to the same report. The suspects were last seen heading in the direction of Cuihu Bei Lu. Shortly after the suspects fled, SWAT teams arrived on the scene.

A security expert from Yunnan Police Academy explained the policeman's actions, saying, "when a suspect resists arrest by threatening a police officer, public safety is already in jeopardy. In this case, the choice to fire warning shots was warranted." He added that civilians injured by the police under any circumstances can request just compensation.

This episode mirrors another incident that took place on May 26. In that case, a Kunming resident surnamed Li encountered four masked men attempting to steal an e-bike. When Li accosted them, the men pulled machetes, knifed him and fled on scooters. Although Li did not suffer fatal injuries, he did require emergency surgery.

In both cases, police are still searching for the suspects and no link between the two events has been established. News outlets describe the men in the Wenlin Jie case as being between the ages of 18 and 25 years-old and all being roughly 1.70 meters tall, although the witness GoKunming spoke with said they were "nowhere near" that height.

Stealing scooters at 11am on Wenlin Jie. Brazen thieves. I think a lone cop chasing them down is pretty impressive. They were no doubt armed with machetes. Probably the same group that knifed the civilian earlier.

Thieves not hit but bus is. Luckily nobody in the bus was hit. Collateral damage? Get these guys but stop shooting.

With all the cameras, you would think that they could catch these guys in real-time.

Yeah with the cameras on street I would of thought that tracking which way they going should of been simple! Works similar way in other cities worldwide.

Can someone put the QR code on this article please so it can be shared on WeChat.

It's getting far more serious when thieves would risk a murder charge (and possible death penalty) rather than going to jail on a theft charge.

Don't go killing people over an ebike, or firing shots that hit public buses, gunfire makes me nervous. Seems there is indeed a doubt about their having machetes. Apparently no civilian was killed in either this incident or the previous one.
But yeah - catch these guys.

What's going to happen is that they are going to start arming themselves with illegal guns now that the police have guns. This is only the beginning. The thieves will will change their choice of weapons. Expect chaos to break out real soon.

I seriously doubt that many thieves would arm themselves with guns just to steal an ebike.

My threats bigger than your threat type actions, expect to see more!
This ain't back home lol as somebody thieving an ebike back home wouldn't make the local newspaper never mind being a big story :)

Maybe the police will ask for bigger and heavy guns to combat the more aggressive thieves. So instead of one bullet hitting a public bus it will be several.

Tasers are a much better option as the next step.

problem with taser is they are no use with multiple perps. but agree that guns not the solution. keystone kops with guns? hmm!