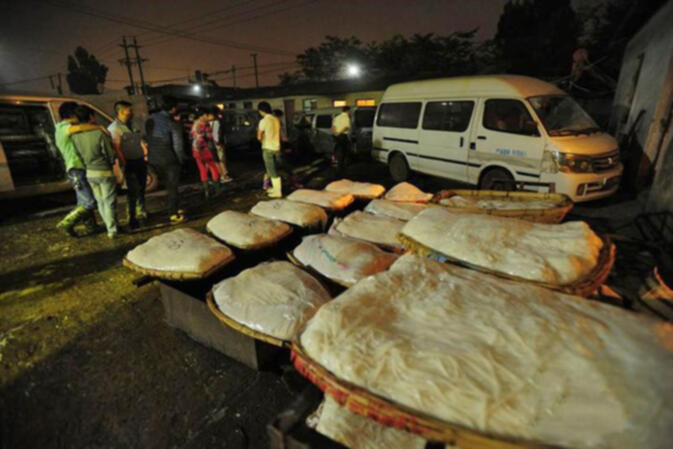 Earlier this week Kunming police discovered a small group of illegal factories southwest of the city suspected of having produced hundreds of tons of tainted noodles over the past six months. Two men thought to be in charge of production have been arrested and the facilities cordoned off pending an ongoing investigation.

Investigators from the almost unbelievably named Joint Brigade of the Food and Drug Administration and the Xishan Public Security Bureau of Economic Investigation and Quality Supervision tested noodle samples in March, finding high levels of the chemical sodium metabisulfite — commonly referred to as metabisulfite. They eventually traced the noodles back to a small town located on the western shore of Dianchi Lake outside of Taiping Village (太平村).

When 38 investigators arrived at the suspected production facility for a nighttime raid, workers were completely unfazed and continued to work normally as three van-loads police descended on the factory, according to press accounts. An inspection of the premises turned up a storeroom stacked with bags of rice flour piled next to 25 kilogram bags of metabisulfite and other illegal but unspecified chemicals. 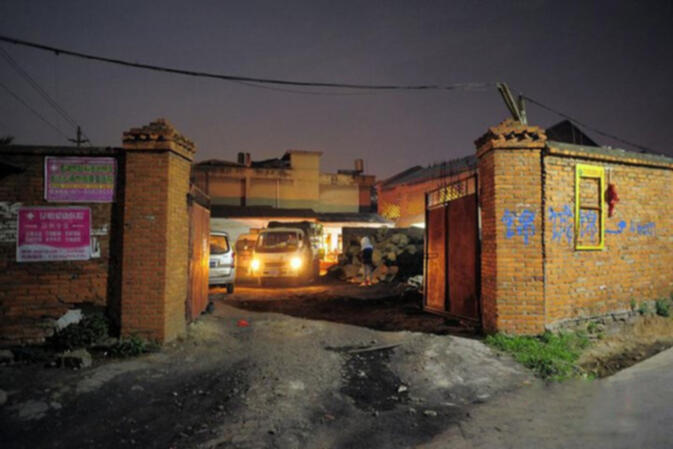 An interrogation of the two brothers led to both admitting they owned the three connected buildings where the rice noodles were made. Confronted with their use of metabisulfite, the two men explained it was only added as a preservative and for its ability to make the noodles appear more attractive. Reporters on-scene at the raid quoted one of the brothers as saying there was no harm in consuming their food and that they "eat the noodles all the time".

The brothers were arrested along with one other worker for violating Chinese food safety laws which stipulate "freshly produced foods may not contain any additives". All three were also charged under suspicion of producing and selling poisonous or harmful food.

Detectives must now attempt to determine if the owners of the noodle factory added large amounts of metabisulfite knowing it was dangerous or if they actually thought it was simply a harmless food whitener and preservative. If the former charge can be proven, the men could possibly receive much harsher sentences in court for intentionally endangering public health. 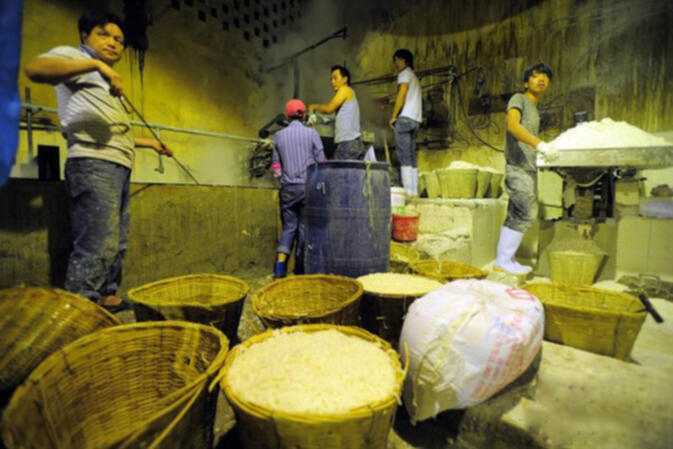 In the food industry, the chemical compound metabisulfite is used most commonly in diluted form as a preservative in beers and wines. It is also added to many pharmaceutical products and often utilized at water treatment plants. It appears the Kunming noodle-makers were using unadulterated metabisulfite. In its pure form, the chemical can cause all manner of harmful effects in humans. These include asthma-type reactions, vomiting, abdominal pain, disruption of the central nervous system and, at elevated levels, death.

From the raid, law enforcement officials confiscated five tons of noodles, dough and ingredients. The seized materials were all sent to labs for further analysis. One of the arrested men said during a typical day, factory employees would begin work at 10pm and finish around 3am. During that time, they typically produced three tons of noodles that would then be sent by minivan and sold to shop owners near Huangtupo (黄土坡), Majie (马街), Longxiang Jie (龙翔街) and other areas of Kunming.

Kunming, like many cities around China, is no stranger to stories of large-scale production of toxic or potentially dangerous food. In 2013, an illegal operation was broken up that had produced 32,000 tons of 'gutter oil' — enough to supply a year's worth of cooking oil to an estimated 1.5 million consumers. Spring City residents were also involved in a 2008 melamine scandal in which 300,000 people nationwide were poisoned while consuming tainted milk powder products.

One more reason not to eat out.

But it's authentic (ergo delicious) because its noodles, right?

Metabisulfite is used as a preservative and antioxidant in food and is also known as E223. It is mostly used in convenience food, jam, dried fruit, juice, potato products and so on. Only inside the European Union E223 is allowed for 61 different groups of food. It stops the growth of bacteria, yeast and fungus. By using E223 the food wont turn brown, which would normaly happen when exposed to Oxygen. The daily dosis for an adult shouldnt be more than 0,7mg/kg bodyweight.

Here's me sitting at home feeling like s**t as my stomach hasn't passed solid in days and i read something like this lol
gotta go, toilet calling again.....

When you go out to eat, you better have toilet paper handy. Never know when one of these 'fake stuff' is gonna hit your stomach like a ton of bricks. Ha..ha.

@Liumingke: seems to me a decision not to east out is a bit extreme - I think I prefer getting the s**ts once in awhile - doesn't happen often - I have eaten out here for quite a few years almost every day.

BK maybe not so comparatively bad after all.
The problem I have with looking at additives that are used in the EU/US is that the dosing of the chemicals is carefully controlled. I am not sure many back street factories would have so much control of how much of certain things go into a product. Possibly why the government introduced the 'no additives in fresh foods' policy.

Regardless of the size of the chemical dose, just look at the picture! A brick factory which looks absolutely filthy; baskets of mixian half spilling onto the floor, and a few dudes with no protective clothing on, hard at work, shedding blood, sweat and tears... all of which are likely to end up in the mixian.

The question is: how many restaurants buy from dumps like this? My guess is a lot, because it will be way cheaper than other places that refuse to cut corners to save a few kuai (of those, I doubt there's many)

It's not far-fetched to imagine that those who eat mixian regularly, may, at some point in time, have been eating mixian made in a place like the one above, which was then cooked in gutter oil, with fake meat, or pork passed off as beef, along with vegetables that were pumped full of antibiotics and raised on water so polluted it's unfit for agricultural usage.

You are so right. This is scary.

But they are still so much more healthy than Burger King....cough, cough!

I am indeed on a China expat website for English speakers.

"Oh my God! So dirty! KFC and Burger King are so much better! Let's go eat perforated imperial cheezebargar, guise!"

I am sure someone was talking about getting their burger fix on another thread yesterday. As such the notion of food culture imperialism is a bit incongruous.

My thoughts still same on eating out ;o) Just thinking funny article timing when I going through the usual once a month bad dish choice pains...
Maybe start calling it my chinese asexual period!!!

@Alien
Everybody has a different tolerance to outside food. I use to get stomach problems all the time since I got here. I decided that I would not eat out often just to have a happy stomach. You probably have a strong stomach and that's good for you. Enjoy! I'll stick to my plan.

@Liumingke: Fine! But tolerances can be built up - in fact they usually have to be - and if you don't eat out they won't be.

When you add up to what e.g. Heller has written there, theres also the tragic fact that not only Nature has been severely destroyed, but ...well, the great people (Chinese) (and truly Great) are having a hard time too....so the landscape is all but golden.

Xinhua wrote today that a "change" has to come "fast" - well, theres probably support from anyone that is/has been, in Love with this bleeding soil.

It sounds like a orbituary, its not yet, but its Getting there...

@tigertiger, Burger King and O'Reilley's aren't in the same league.

Filthy factory?? Nothing new; most of the noodle shops aren't any better.
Preservatives: More is better ..right?

They should raid some of the major beer factories. Ohh!! Cant do that, too much Guanxi and money involved with those companies.
I stopped drinking Chinese beer because I get a bad reaction to the sulfites but imports are ok, same as the home brew from the bad monkey, A1..

@mike: no. in fact most of the noodle shops are better.

most of the noodle shops buy in the noodles, specially the mixian. bad monkey beer no so good since they got new brewer last year.

I agree with the taste of the new batches at the BM but my comment is related to the "preservatives free" beer or "low level" if they use any.
I'm quite sensitive to sulfites.

aw! you are such a sensitive guy is all.

I'm beginning to believe that the general population here is either not concerned with food safety or has no concept of it.
Yesterday while walking up Longquan Lu, we passed a man butchering a pig - in the middle of the (dirty) sidewalk in front of his restaurant.

Sodium Metabisulfite is VERY common in foods ALL AROUND THE WORLD. For instance, virtually all cider, perry, wine and juices include it. IT'S NOT BAD FOR YOU IN SMALL DOSES.

The alleged problem here was only dosage, and no figures have been given. It's unlikely that eating too much of this in a few noodle meals is going to do much damage.

The upshot is, if you are worried about your personal intake of preservatives, don't drink non-fresh juices, wine or cider, and stick to fresh non-processed foods.

I'm sorry but Sodium Metabisulfate isn't dangerous.. there are no side effects and it's used as a food preservative and antioxidant additive...en.wikipedia.org/wiki/Sodium_metabisulfite